I had a few things to think about today, so I did what I usually do when I'm so burdened: mindless physical chores. Somehow they always seem to put things in perspective, or bring about an answer, or settle whatever it is that's over-loading my brain.


Then I drove back for.... No, I didn't. By that time my left shoulder said "Enough shoveling for the day. I don't care how much Aleve you feed me, I'm not shoveling any more gravel today. Tomorrow, yes. Today, no. Find something else to do."

In the meantime, I kept getting distracted by the scenery: 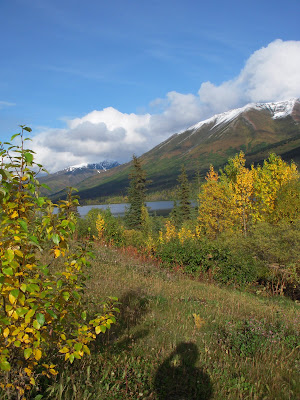 So, taking my shoulder's advice, I unhooked the trailer and put on my hiking boots and fluorescent orange safety vest, and hit the road. Whenever I saw new litter in the roadside ditches, I stopped, put the litter in a bright yellow bag, then drove on to the next litter, all the while pondering what was on my mind.


Which, as I said, kept getting distracted: 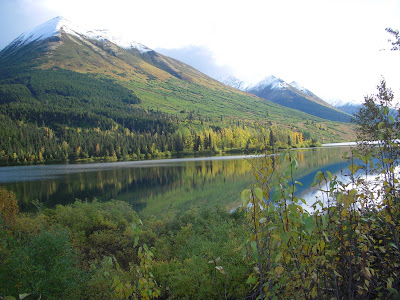 On and on I drove, past Summit Lake, along Lower Summit Lake, then dropping down towards the Hope cutoff, driving on the shoulder where I could, flashers blinking merrily, looking for the tell tale glint of a beer can or the stark white of a coffee cup. Meanwhile, things seemed to be coming together in my head, except when it was otherwise occupied by things like this: 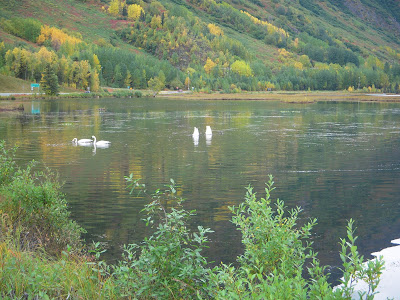 These are tundra swans, biding their while at Tern Lake as they begin their annual migration to points south. You probably can't see them in this picture, but circling all around these beauties are dark ducks, opportunistic feeders on the vegetation the swans scrape up from the floor of the lake. The swans don't seem to mind at all. The two on the right have their long necks extended down into the clear water, giving new meaning to the expression "bottoms up."

By the time I reached Turnagain Pass, I'd pretty much decided what to do. I'd covered thirty miles in four hours, picking up litter where I saw it, and filling five large bags, plus a pile of hub caps, roofing, cooler lids, corrugated plastic, and a broken guitar, along with the guitar case. To keep things in perspective here, I do this a couple times a week, and it's the ideal time to have a conversation with myself.

At Turnagain, my usual turning around point, darkness welled up from the tundra and put an end to my litter-picking for the evening. I turned off the flashers and drove to the Hope cutoff, where I left the pile of trash in my usual spot outside the locked gates of the highway maintenance yard. With the five bags today, that brings my season total to 140 bags of trash. 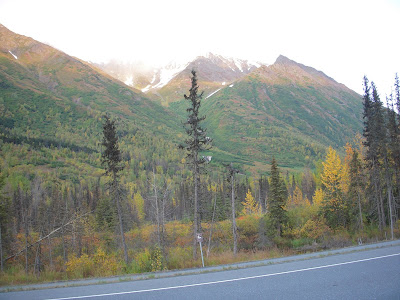 Here, in this picture, the sun is settling below the mountains behind me, its rays reaching only the uppermost slopes with their dusting of new snow. Today is officially the first day of fall, but autumn is well in progress here. The turning colors of the vegetation make these mountains resemble Persian carpets. Well, when the sun shines on them, they do. We've had little sunshine this past "summer," the third coldest on record in this part of the country. Perhaps that's why I go bonkers with the camera every time the pewter sky parts enough to let it through. 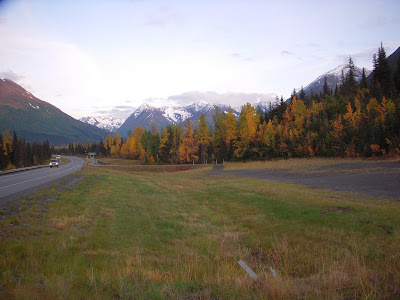 Well, distractions or no, I reached a decision. I'm going to get back to writing the book-in-sporadic progress that I've been tinkering with for more than two years. The data's mostly organized, and more and more often I've been able to read it without having to take many mental health breaks. It's subject matter is a journey I took, one that lasted more than seven years. Near the end of that journey, some astounding things occured that still have me marveling at the way things come full circle in life.


I also decided that I'll keep an online journal of the progress, or lack of, that I make while writing the manuscript. In doing so, I'll be abiding by the advice all writing instructors emphasize: write, write, write. The act of putting pen to paper, or fingers to keyboard, sets in motion the process for words to flow. You might write garbage in the beginning of that exercise, but eventually the words will come. This advice is why you might see people sitting in coffee shops or train stations or on park benches, writing frantically in their journals or notebooks, or on their laptops. They're waking up their right brains, hoping that some of their words will be worth reading, or publishing.


I think of it another way. If I write garbage long enough, my muse will take over as she doesn't want to be held accountable for the garbage. So, my online journal, if I actually follow through with it, will be to accomplish just that--embarass my muse into cooperating.