I'm only here because yesterday I said I'd do this. I promised I'd keep a journal of my attempts to write a book about a journey I took. That journey probably is not what you'd expect. I didn't travel to exotic lands; I didn't climb K-2 or raft the Amazon.

The journey I made was with my husband, and his Alzheimer's disease. That is the subject matter. I think my relating the journey will help others who find themselves caring for a spouse or other loved one who disappears as they watch. I have a format in mind for the manuscript, and have the data collected and organized. I even have some draft chapters written. What I think I need to do first is to separate the data and drafts chronologically, in order to see what I have and what I need.

For some reason, I seem to be dragging my feet. I've already fought an internal, ethical battle of whether or not to do this. His family needs to be considered, as does his legacy. I have received objections in no uncertaian terms from family members who ask that I not do this, that I not abuse their memory of him by portraying him as incapacitated.

I set the work aside for almost two years, mostly because of this objection, but also because I required frequent mental health breaks when memories of traumatic events began to drown me. In the meantime, I practiced writing other stuff, learning the craft. All the while, I thought of others who are stumbling in my footsteps, not knowing the things of which I was ignorant, not understanding the things that were beyond my comprehension.

I thought of how overwhelmed I was, to the point where I had no energy to research problems and situations that begged for research.

I came to the conclusion that pseudonyms will protect the family, and that I owe it to those who helped me to try to help others who are following this dreadful pathway.

Tonight, I'm too tired. I think that's the problem. The data file remains in the closet. The flash drive hangs from the hook on the wall. I haven't opened a single file in Word. I'm too tired, I tell myself, thinking of my nice king-sized bed where I now sleep alone.

Today I finished my filling-the-pot-holes project, and drove to Turnagain Pass to begin collecting litter on the way back. Darkness put an end to that project yesterday. Today I collected four more bags of trash and made it back ten miles to the Hope cutoff. By then I was too tired to continue, and the light sprinkle that had been falling became a little more persistant. After dropping off the bags of litter at the state yard, I pulled over picked a few young mushrooms growing by the side of the road.

So, if I should die before I wake, blame it on the shaggy mane mushrooms I ate. 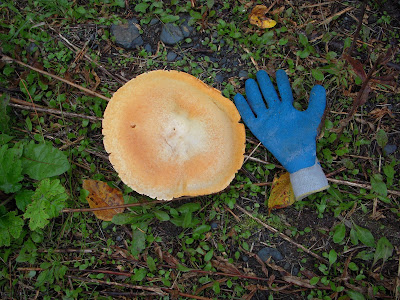 This is not a shaggy mane mushroom. I thought it was a bucket lid when I first spotted it and stopped to pick it up and add it to the litter in the big yellow bag. It also has nothing to do with the journal entry above, but at more than ten inches across, I just thought it was an awesome mushroom.