Twenty-some years ago my friend Ramona had the use of her friend’s team of Malemute-McKenzie River huskies. These were working dogs, used by her friend Steve to haul freight and gear on Mt. McKinley for mountain climbing teams. During his off-season, Ramona ran them to keep them in shape.

Down the road lived my team of pets, Siberian huskies mostly, though one of them was rumored to be one-eighth wolf. He sired a litter by one of my females, and I kept two of the pups. They were now my lead dogs Mugsy and Bashful. I used my team for recreation and a ten mile run was a good workout for us.

Ramona and I decided to take on a bigger challenge one winter—we wanted to mush to the old copper mining town of McCarthy, deep in the Wrangell-St. Elias area, where our friend Nancy owned a cabin. All the plans were made early in the winter, which gave me plenty of time to get my team of laggards into shape for the sixty-three mile run from Chitina to McCarthy on the railbed of the defunct CR&NW. 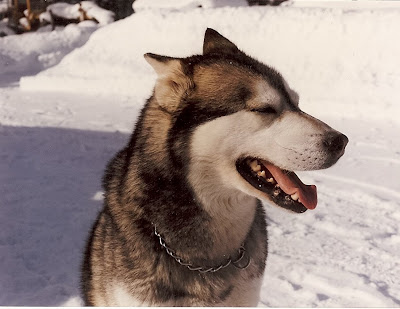 Mugsy the Magnificent, too proud to pose for the camera

I put in lots of time that winter getting those dogs ready. We got so a run of eighteen miles from our home to Cooper Landing and back wouldn’t make us collapse with exhaustion, and I was feeling somewhat optimistic about our chances of getting to McCarthy without totally disgracing ourselves in front of Ramona’s team of Mack trucks, as I called those huge, freight-pulling dogs.

As a tune-up trip, or shake-down cruise, we decided to run the dogs from the Petersville Road to Kroto Lake, where friends had a ski lodge. In the days preceding our run, the area received about four feet of new snow, making the trails slow and difficult. We were carrying heavy loads, trying to simulate as closely as possible the weight we would have to carry on the later trip. 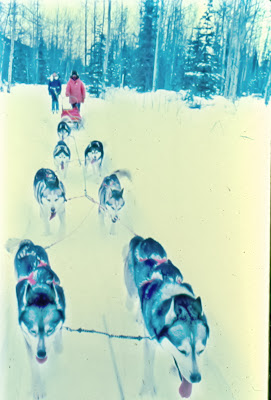 A training run with Mugsy and Bashful in lead

It seemed to take hours to reach the lodge about ten or twelve miles off the road, and I was feeling discouraged about our chances on the Chitina-McCarthy trip, but kept my concerns to myself. I was a bit more optimistic the morning we prepared to leave the lodge and head back to the trucks, and hoped my dogs would perform better.

Once on the trail they seemed even slower, and I was mentally writing the script I would have to repeat to Ramona and Nancy as I cancelled my participation in the upcoming journey. To make things worse, I’d neglected to bring booties for the dogs and the new snow was clinging to some of the dogs’ feet, forming huge, painful snowballs. Every few minutes I would have to stop the team and pull chunks of snow from the huskies’ feet.


As we approached a large open area, a red and white Super Cub on skis landed in the soft snow. When it came to a stop the small airplane sank to the fuselage, supported only by the “tail feathers.” It was my husband Ken, who was supposed to have flown in to the lodge at Kroto Creek but the weather had not permitted. Now, here he was, buried in deep snow alongside the trail back to the Petersville Road. Wearing hip boots, he waded through the soft snow over to the packed trail where I waited with my dogs. After some initial conversation, I told him how disappointed I was in my team’s performance and how I was thinking of canceling the long awaited trip to McCarthy. 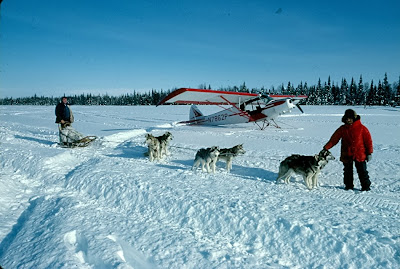 My husband holding the dogs, me in my fluffy down parka and fur hat with my hand on the two lead dogs, our Super Cub in the background. Four feet of new snow meant staying on a snowmachine path or swimming waist deep in powder.

I asked him how much farther we had to go to get to the Petersville Road, telling him we’d already been on the trail an hour.

Whoa! Ten miles in an hour with stopping every few minutes to remove snowballs. Maybe I should reconsider my pessimistic attitude, I thought, as I watched him get the small plane up on step and fly away.

Coming soon: The big day arrives and we're up against the Mack trucks...
Posted by Gullible at 12:16 AM