Chapter One
The Fashion Statement

To those of you who recently received an e-mailed photograph and an announcement closing my flight plan from Boulder Creek moose camp to Moose Pass, and who responded with such pithy comments on my fashion statement, I have this to say: you were supposed to be looking at the scenery.

Actually, I have a lot more to say, but I’ll deal with the fashionistas first. Putting everything in context, I was appropriately attired. Not for Fourth Avenue in Anchorage or even the main drag in Wasilla, but for moose season at Boulder Creek, I was spot on (Whatever that means. I heard a Brit say it and rather liked the sound of it, if I do say.). Now that I reconsider though, I doubt I would have raised any eyebrows in Wasilla and certainly only a couple in Anchorage. This is Alaska, after all. 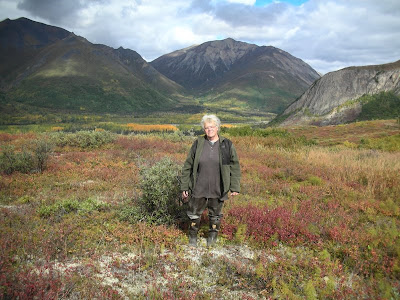 Thus, for my walk on the fashion runway, I selected a light aqua stone-washed tee shirt, designed by artists at Parker Ranch on the Big Island of Hawaii. Embroidered across the breast of this well-made XL tee were four exquisitely rendered horses in full stride, three bays and a sorrel. This out-of-print color used to be available at the Parker Ranch Store in Waimea at the over-priced cost of $28.00.

In a succinctly stated endorsement of the layered* look now so fashionable, I wore over that a medium-sized long-sleeved four button Henley thermal knit shirt by Outdoor Life, its color determined by the lighting, but varying between moss green and glacial grit gray. This garment is of the “grow with you” variety of clothing so popular with parents whose children outgrow their new school clothes before Hallowe’en. Every day I wore it the hem and sleeves got longer. Available at select Sam’s Clubs for $13.47.

Rider’s stretch jeans in indigo blue, in a size not to be revealed and at the everyday low cost of $19.99 at Wal Mart, were worn under the most important part of the ensemble: Hodgman hip boots. Unfortunately, the only available model (me) was vertically challenged and unable to show the Oxford brown rubber leggings to their utmost. You can see that they seem to be doubled and tripled over at knee height, despite the fact that the straps attached to the belt loops of the jeans were shortened to the max. This is because the boots come to my waist when held beside me. Accented with ecru soles and a cute little Hodgman label with stylized trees in a coordinating color, vulcanized on the front below the knee, these boots are available at Fred Meyers’ stores everywhere. Except maybe Phoenix.

Accessorizing the ensemble was a moss green and black fleece jacket by Izod, currently available at Sam’s Club for $21.26. The generously cut front zipper jacket affords the wearer plenty of room to allow for layering* of a multitude of shirts and vests beneath its soft fleece comfort. Especially appreciated are the two zippered hand-warmer pockets as well as the all-important zippered breast pocket, in which one is supposed to carry one’s digital camera, rather than in the Rubbermaid black plastic with gray lid and snazzy red handles Action Packer that was covered with a blue tarp and strapped to the trailer being pulled by Matt’s four wheeler. (Editor’s Note: Action Packers come in a variety of sizes for matched luggage.)

And now you know the reason for the serendipitous stop at this place with its scenic background. Well, there were also its proximity to a girl bush and the meeting of two hunters headed to their camp.

When meeting other hunters, trail courtesy calls for long stops to engage in bull. Bull as in bull moose. Who got what and who saw what and who has the best story so far. There were a spike and a fork and a beautiful 57 inch rack. There was the horse carrying two large racks, one on each side, and a very tired pack horse trudging behind, laden with moose meat. 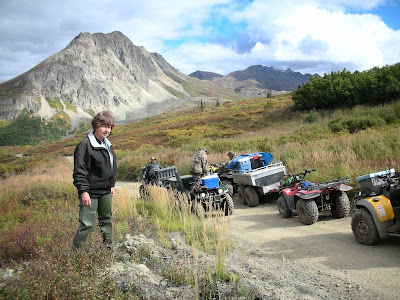 Suzanne stretches her legs while the hunters shoot the bull.

But the hands down winner by far belonged to “the other Matt” whose daughter, it is commonly rumored, reminded her daddy to take his rifle with him when he went to the outhouse. You got it. With his pants down, sitting in the outhouse, a legal bull stood up and Matt got his moose meat. He also has a very happy daughter.

Now, back to the scenery. In the valley behind the fashion model, who (again) is appropriately dressed for the context, lies the alluvial plain of Boulder Creek. If you follow the mountain ridge on the right down to the valley floor, that will point to where our camp sits. It’s called “Tent City” for reasons that might be apparent simply by its name, but would be perfectly understandable if I sent along a picture. Alas, I will not do that as my dialup service creeps along like a snail on Prozac, which is my new favorite saying and which I stole outright from Eva Shaw.

As to exactly where Boulder Creek is located, I’m of the species IGMNLTD, an acronym that stands for “I’ve Got Mine, Now Lock the Door.” I will tell you that Chickaloon figures into its locale, and I tell you that only because I’ve always liked the sound of the word “Chickaloon” and couldn’t resist sticking it in this journal. I even know someone who lives in Chickaloon.

Other than that, I’m counting on the fact that the Alaska Atlas lists 24 Boulder Creeks in the index, along with a variety of Boulder hills, islands, lakes, points and ridges. It’s out-done by Moose Creek, with 41 entries, and probably by a number of others such as Bear, Caribou, Camp and Cottonwood.

Anyway, the picture was taken on a ridge overlooking Boulder Creek valley. We were on our way out of camp, back to where we’d left our vehicles parked. Suzanne and I were being escorted by Matt and G.B., and for the journey out we were taken along the Rush Lake trail, rather than the several miles shorter route through spots affectionately named The Rock Garden and The Bog. These two spots are the nemesis of all riders on the entire rough, rutted, rocky, muddy trail. I never knew four wheelers could climb over boulders as big as the ones in The Rock Garden. Too bad our GIs didn’t have four wheelers when they landed at Normandy and faced the steel barricades known as Belgian Gates on the beaches. Nor did I know that ATVs were amphibious, as proven in The Bog. Hence the need for the Hodgman hip boots.

In closing this chapter, I have two messages.

To those of you who had some snippy remarks about my attire: get a life.

To those of you who said my attire made me look taller, but did not adequately reflect the new and thinner me: I love you.