I really, really hate to admit this, but…..I’m hearing voices in my head. Not the mountaintop edict variety and certainly not the kind that warns the neighbor’s dog is Beelzebub. No, the voices I hear are saying only one thing: “Sarah Palin.”

This is NOT a political diatribe, so it’s safe to read further.

I’ve heard about dental fillings picking up radio signals, so I Googled it to learn if it’s true. I found a lot of information, but the answers I liked best came from Google Answers. Wouldn’t you know, the very first was an article written by Alaskan Ned Rozell. How auspicious. I’m hearing voices saying an Alaskan’s name, and the first answer I find is one written by an Alaskan. Ned is with the Geophysical Institute at the University of Alaska, Fairbanks. When he isn’t walking up and down the Pipeline haul road with his dog Jane, he writes fascinating articles about various scientific subjects.

After interviewing a professor emeritus at the institute, Ned wrote that in extremely rare cases “a person’s mouth acts as a receiver. The electrical conductivity of the human body can act as an antenna. A metallic filling in a tooth, reacting just so with saliva, can act as a semiconductor to detect the audio signal. The speaker in this case would be anything that vibrates within the mouth enough to produce noise, such as bridgework or maybe a loose filling.”

Deeper into the Google Answers I found a long article from Urban Legends-Snopes.com. This one was about Lucille Ball. Lucy claimed that in 1942, after having some temporary lead fillings installed, she was able to hear the radio while driving home from the MGM studios to her ranch in the San Fernando valley. She reported that her mouth was “humming and thumping with the drumbeat.” At the time, she thought she was as crazy as the ditzy redhead she played.

A week later, she drove home by a different route and her mouth started to react again. This time, she recounted, what she heard were Morse code signals. The next day she mentioned it to security personnel at MGM, and eventually the feds were contacted. This was wartime, remember, and Californians were terrified of a Japanese attack, especially after a Japanese submarine was spotted off the coast of Santa Barbara.

According to the story, an undercover Japanese gardener-spy was transmitting by a secret radio. So goes the legend, and Snopes rates the story as “undetermined,” mainly because it can’t find any written back-up.

Now, I don’t think I’m channeling Lucy, but every once in a while I definitely hear “Sarah Palin” in my head. It seems to be the right side of my head, just above the ear. I will admit that I’ve been listening to a lot of television news programs lately, much, much more than usual, and they are awash in Sarah Palin reports.

But, I hear these voices when the TV is off. I can’t be hearing sounds from my neighbors because all the lots around here are a minimum of two and a quarter acres, and most of us have two lots. No, I’m definitely not hearing “Sarah Palin” from the neighbor’s TVs or radios. Or their dogs.

I know that dental fillings have changed over the years, but I suspect that my mouth still contains fillings from the late 1940s and 1950s. As I recall, I spent half my childhood in a dentist’s chair—the other half climbing trees.

There’s always the possibility that I’m hearing echoes in my head. Like, I turn off the TV and “Sarah Palin” just keeps bouncing around in an empty skull until it bounces near the hammer and stirrup, and I “hear” it. The problem with this theory is that my skull isn’t empty. It’s crammed to overflowing with useless trivia.

These voices aren’t at all like when a song gets stuck in your head and you can’t get rid of it. Danny Kaye did that to me one day with “Wonderful, Wonderful Copenhagen.” I didn’t mind the song so much, but I really hate it when I can’t remember any more words than the title. That really drives me crazy.


Which segues very nicely into the remaining possibility. 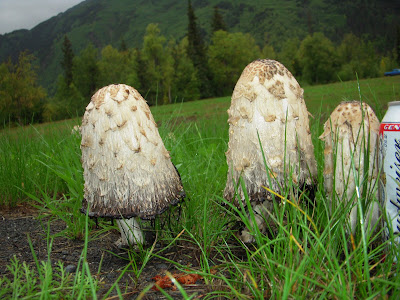 These are HUGE shaggy mane mushrooms I found while picking up roadside litter. Part of that litter was the Bud can I used for size comparison. This picture has absolutely nothing to do with the preceding. I just thought it was a cool picture.
Posted by Gullible at 3:58 PM