I came out of the closet last night. No, not THAT closet. Another one farther down the hall—the one that smells of smoke and reminds you of bacon. That one—the one where the hams hide.

Thing is, I didn’t even know I was a ham. I thought I was shy. Well, I am shy. One on one I have trouble carrying on a conversation at times. Oh, wait a minute. I seem to recall several long-winded conversations with perfect strangers over the last few days, so perhaps I’d better modify that claim also. On second thought, I was telling stories then, too. 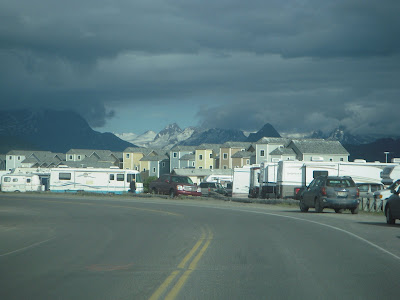 These photos have nothing at all to so with this post. They are here to catch your attention. I like the lighting in them.

But last night in front of a whole big room full of people, turns out I’m a ham. Turns out I don’t have any trouble at all speaking to a large group. Before I got up on that stage, I was remembering twelfth grade speech class and how speaking in front of a class of thirty or so of my fellow students—all of whom were fervently thankful that they hadn’t been called upon by the teacher—was like a month in purgatory. “Don’t look at me. Don’t look at me. Shut your eyes, plug your ears, and go to sleep until I’m done reading my speech.”

Back then, back in the dark ages, a semester of speech was a requirement. Naturally, as shy and self-conscious as I was, I put off taking it until the last semester of my senior year. I think I was hoping the administration would change the rules, and I’d escape that dreaded class. Just before the half-way point of the class I was doing so-so. Nothing great, but passing. Then, one day, I arrived in class and realized I had missed an assignment that had been given one day when I was (voluntarily) absent. I felt all the blood in my body fight with my stomach for room in my feet. I felt sick, because I had never done that before—missed an assignment or come to class unprepared. 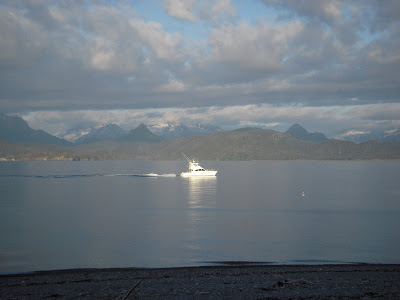 Late (10 p.m.) sun on the foothills across Kachemak Bay.

The sadistic teacher, Mrs. Bruce, with her unerring sense of the pitiful and vulnerable, called on me first. I had to admit I was not ready. Report cards came out shortly after that, and I had failed the first half of speech class. A letter went to my parents advising them that I was in danger of not graduating that spring because of my failing grade in a required class.

That thought was more than I could stand. I hated my last year of high school and couldn’t wait to get out. Many of my friends, the ones I hung around with, had already graduated and gone on to college or work. How dare “they” not let me graduate?

The next assignment was to tell a story. I found a dandy: “The Murders in the Rue Morgue.” I don’t recall much of the plot, just that a man had volunteered to spend the night in the Rue Morgue to disprove tales of people dying there at night, and of course he was found dead in the morning when the attendants went to let him out. The sadist called on me, and I am certain she meant to trap me again. This time I fooled her. I set my jaw and walked to the front of the class. The protagonist’s name was French, and I wrote it on the blackboard so the class would know how it was spelled (spoken French not sounding at all like it’s spelled, of course). That would have distracted me the entire story, were I the listener. The class sat in rapt attention. Well, who doesn’t like a good story?

Best of all, though, Mrs. Bruce was bowled over. I received an “A” plus and Mrs. Bruce became my favorite teacher. After that, I hammed it up for the rest of the school year. Until the class was over and I graduated, I never received a grade less than an “A.”

Maybe that’s where it started, this tendency of mine to be a ham. Maybe it’s where I got this love of exceeding someone’s expectations of me. Well, just take a look: country gal, unsophisticated, casual—very casual—dresser, far more comfortable out in the woods than in a city.

Last night’s Open Mic reading was the final evening session at the Kachemak Bay Writer’s Conference. It is associated with the University of Alaska Anchorage. Thirty of us attendees had volunteered (!) to read, and there was waiting list of more. Earlier in the day I had attended a session on line-by-line editing, and I was either having hot flashes or dreading the evening, because I almost scratched my name off the list. But I really thought the piece I had prepared could hold its own with the other’s works, even though I didn’t know what they were. I was going to learn a lesson that night—good or bad. 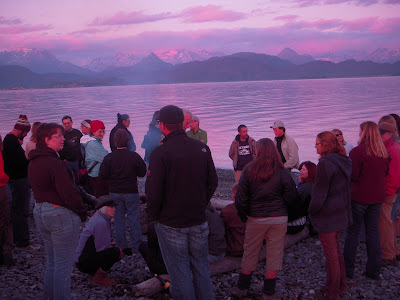 The conference attendees gather at midnight around a bonfire on the Homer Spit beach after last night's Open Mic readings.

So, when I got up in front of a hundred and fifty or two hundred people last night and pulled it off splendidly, I opened that closet door wide and stepped out. Those people, by the way, consisted of many members of academia—university professors, MFA candidates, writing teachers from across the nation, professional editors—as well as a literary agent from New York City, just the type of people who remind me of my deficiency in that area.

Well, too late now. I’m out of the closet. 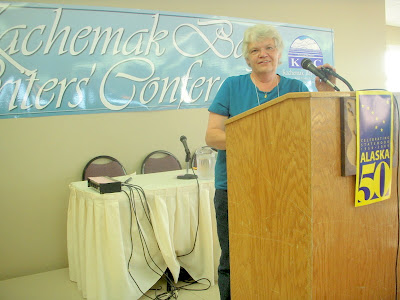 PS: By the way, six years after I was in Mrs. Bruce’s class, my younger brother found himself subjected to unfairly high expectations when she confirmed his relationship to me, and told the whole class about me. He made sure to let me know about it, too.