Earth mama gave the little guy some new digs. I stopped to see if he was still alive today, and earth dad stopped his yard work to show me the living proof. There he was all nestled into this bright cocoon. Makes it harder for the cats to get to him. I had forgotten just how tiny he really is. 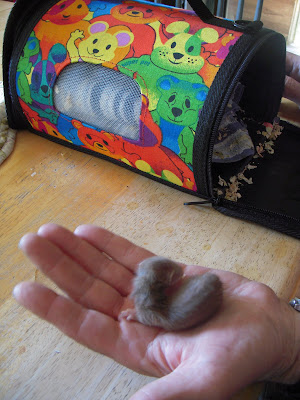 Eyes still not opened, but I Googled "baby weasels" and learned that they don't open for 30 to 35 days. Wow. Earth dad said baby weasel was eating, and I thought he was much more active than the day I plucked him out of a roadside ditch. I keep wondering what happened to mom weasel, and the only thing I can surmise is that she may have been snatched up by an eagle or an owl, but that doesn't explain how the baby got in the ditch alongside a very busy highway. 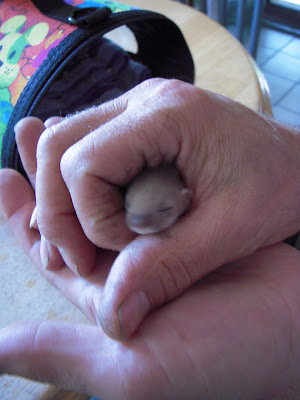 Earth dad says when he sits down to watch TV, baby likes to sleep in his shirt pocket. "I think he listens to my heart."

Earth mama e-mailed that baby's name is JWF. What a coincidence. Those are just like my intials. I sure hope it isn't illegal to rescue these little critters. In the Anchorage newspaper the last few days have been stories about three cop cars ganging up on a woman driving a pickup truck. In the canopied-bed were two moose calves. Story is mama moose was shot (legally) after she stomped a pet dog and was heading for the female half of the dog's owners. The male half put an end to that. The driver claims she was taking the calves to a place where they would be safe, afraid officials might put them down.

I am well aware that seals, bears, moose, etc., should be left alone because often they are not orphaned or abandoned after all. But after waiting around for an hour or more, no adult weasel came to rescue this little guy and I could not, I simply could not leave him to become raven bait.

I'm just wondering what earth mama will do with little JWF when he's grown. They're welcome to bring him to my place--the voles out here are running amok. I have great patches chewed out of my lawns by the little rodents.

In the meantime, all seems well with the little guy, but it's only been two days.
Posted by Gullible at 11:53 PM