Where It All Doesn't Happen

The first port of call on my Royal Caribbean cruise to Alaska from Vancouver, BC, was Juneau, capital city of the largest state in the union, also known as the place where it all doesn’t happen. Seriously, Juneau and the rest of Southeast Alaska should belong to Canada. It’s down there in that little strip of mountainous land that hangs off the eastern edge of mainland Alaska, much like a tail hangs off an Afghan hound. 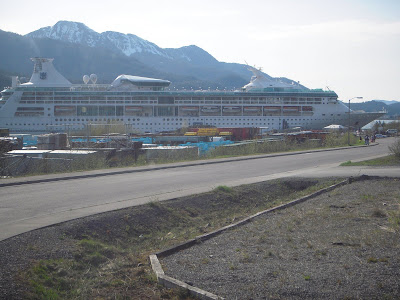 The first chance I had to see my ship, Rhapsody of the Seas, and take a photo of it.

Other than a brief sojourn twenty years ago at the Juneau airport, which really isn’t even in Juneau, I’ve managed to avoid the place for thirty-five years. And even back then I didn’t get off the ferry, just watched the pouring rain from the comfort of the forward lounge. Before that, I slogged the wet streets on Juneau one rainy afternoon in the early seventies, during a brief stopover on another ferry trip. I felt obligated because it was my first visit ever to soggy Southeastern.

You noticed all my visits were by boats? That’s because, other than by air—and I’ll get to that in a sec—the only way into Juneau is by sea. Can’t drive there from anywhere. Fishing boats and the state ferries are about it. The air thing? Okay, picture this. Strap yourself into a narrow seat in an aluminum can and make sure you read the safety placard in the seatback pocket. It’ll lull you into thinking you can survive a trip to Juneau. Here’s the thing about Juneau and aviation: picture a tiny little airport surrounded on all sides by water, steep mountains, icefields, and zero visibility. It sits at twenty-one feet above sea level, and Juneau has sixteen foot tides. Tide land had to be filled in, and part of Gastineau Channel dredged in order to build that airport. 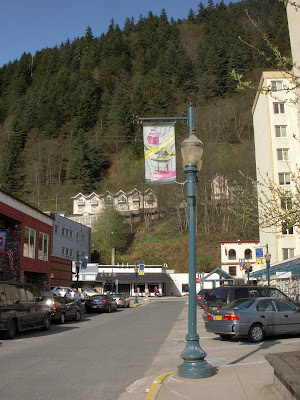 Did I mention Juneau was built on the side of a mountain?

But the best thing about Juneau is that it’s where we send our state legislators so they can hide out and draw humungous salaries and whopping per diems, all the while NOT doing any state business that the rest of us can determine. Then, because they didn’t do anything but squabble during the regular session, they have to be called back for special sessions. With per diem, of course.

A long time ago, the people of the state voted to move the capitol of Alaska closer to the greatest population center, that being Anchorage. But, because the enmity between the pro-move and the anti-move factions was so rabid, Anchorage decided to pretend it really didn’t want to be the capital and suggested Willow instead. Then, in the wake of the doomsday tears and panic attacks that followed the at-long-last-successful capital move vote, a new wrinkle arose. The people of the state had to approve any construction bonds to build any part of the new capitol buildings. So, the legislature continues to hide in Juneau, out from under the eye of the majority of the population, which is probably why several former legislators are now in prison.

Willow, by the way, is a bend in the road just north of Wasilla, which is where Governor Sarah hails from, and no, you can’t see Russia from Willow either, but you CAN drive to Willow. (And listen, this "capital, capitol" things can be a bit confusing. One's the place, t'other's the building. Take your pick.)
In the meantime, Juneau is always trying to do sneaky, underhanded things like build big buildings and lock the state into long term leases. On the other hand, slowly but surely, more and more state offices and personnel are relocating to Anchorage. Gov. Sarah has an office in Anchorage, and spends more time there than in Juneau.

Anyway, there are two good things about Juneau, and when the weather cooperates, you can actually see them. One is the Red Dog Saloon, which is in the center of touristville in Juneau, and the other is the Mendenhall glacier, which really is a pretty sight—on a good day. Otherwise, both of these things are socked in by clouds and disguised behind torrents of rain. 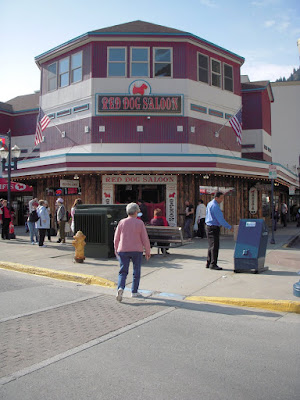 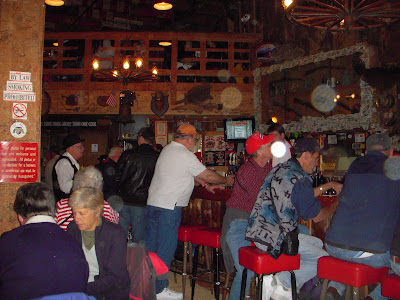 Inside the Red Dog. 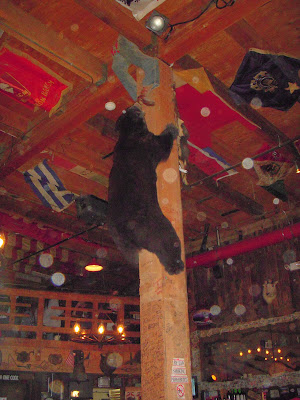 Things can get a little wild in the Red Dog.


Juneau’s the place where the locals know it’s not a typo when they see this sign in the window of a business that’s closed: “Closed for sun day.” Yes, merchants are known to close their doors if the sun actually shines in this place that can get almost a hundred inches of rain a year. A friend of mine who once lived in Juneau (he found out other people don’t need SCUBA gear to breath while walking through their towns) said they all used to quit their jobs if the sun was shining. 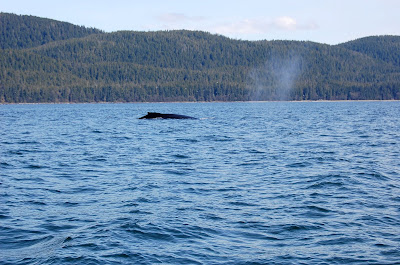 Like I said, Juneau was the first stop on my cruise to Alaska. I filled my morning hours on the ship attending the writers’ workshop, and then lit out for the shore excursion I had booked, a land and sea photo safari. “We go regardless of the weather.” Great. Along with expert advice on photography, our guide told us about Juneau, and some of the sights we passed on the way to the small boat harbor. 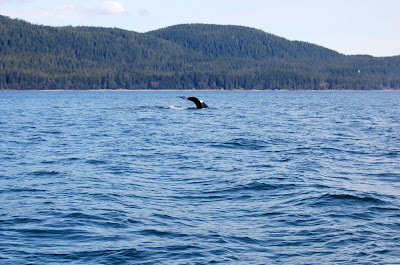 Whale's tail, shown as it starts a deep dive.

I will say this: Juneau sits in a lovely setting. It perches on the side of a mountain. Those mountains reach right out of the sea to four thousand feet. Islands punctuate the Inside Passage, helping to keep the ocean waters calm and navigable for small craft. Humpback whales from Hawaii and Mexico journey through here en route to their feeding grounds in northern Alaska, young calves spouting and blowing and diving alongside their mamas. 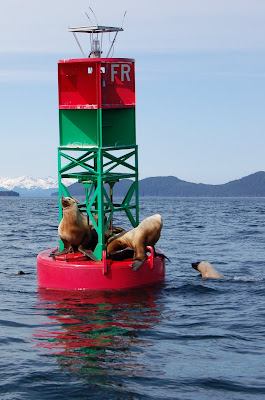 Sea lions and the buoy.

Stellar sea lions play king of the mountain on a red ocean buoy, bellowing at encroachers, or suitors, whatever role the ones in the water are playing. I suspect there is not much finesse in courting sea lions. Bald eagles float on air currents overhead, or perch on rocky crags. 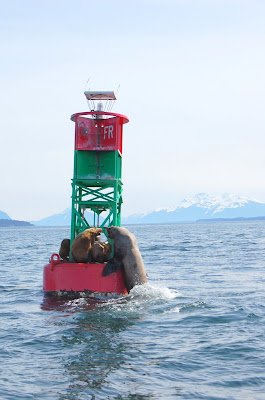 Mendenhall glacier is a scenic beauty with highly-compressed blue ice visible along its face. A trail through the adjacent rainforest shows where the glacier had once carved its way through rock as its sheer weight pushed it seaward like a river of ice. 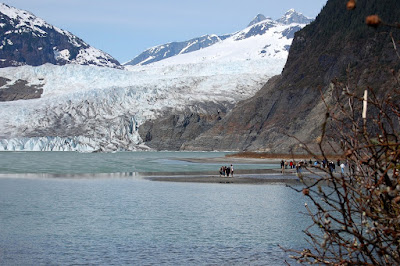 The Mendenhall Glacier. Those are people on that sand bar. 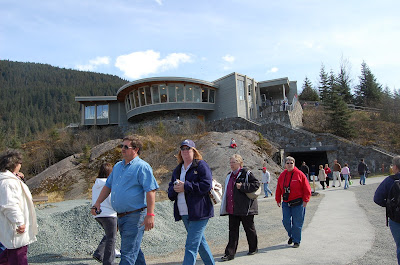 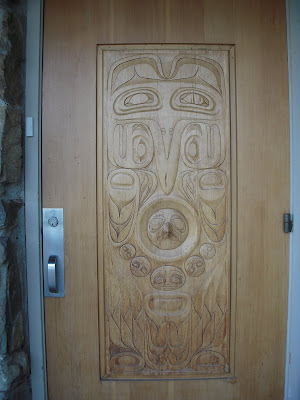 Back downtown, and left to my own devices before the ship sailed north again, I wandered through touristville--the blocks of tourist shops that had sprung up since my previous visit almost forty years ago. I have never seen so many jewelry stores! They were everywhere, with tee shirt shops squeezed in between. Many were selling stones I’d never heard of before, not that I’m well informed on such things.

And then, the first clue: “This shop is owned and operated by a long-time Juneau family.” Hmm. Over on another street: “This shop is not regulated by the cruise ship industry.” Double hmmm. Here and there, out-numbered by far, little shops had such signs in their windows. I combined this with what’s said around my parts: “You get off a Princess ship, get on a Princess coach, go to a Princess lodge. Princess doesn’t let you get too far from a Princess cash register.” Got it.

I don’t know who controls the Red Dog Saloon, but I’ll bet Miller Brewing Company doesn’t. I’d lay money on that wager because way back when Miller’s Red Dog beer first hit the market, the liquor salesman that took orders for my lodge informed us that the Red Dog Saloon had successfully blocked the sale of Red Dog beer in Alaska because it had registered the name first, and had the right to its exclusive use in Alaska. Thus, a little old saloon in downtown Juneau had bested the giant brewing company. 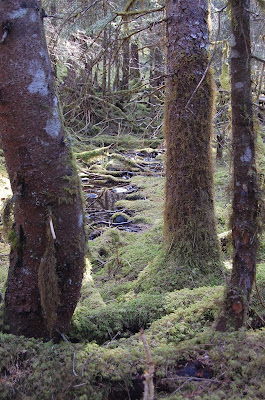 Shafts of sunlight peeking through into the rainforest.

There were two Holland American Lines cruise ships docked right next to touristville. The massive ships made the small business district look even smaller. A mile farther out of town is where my ship was docked. I’m not sure why it had to dock so far away, but the most amazing thing was that I could see it, that pretty white ship almost a thousand feet long, with its twelve decks, and modern, sleek spaceship-looking upper lounge. 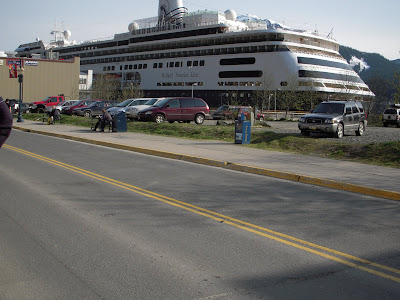 One of the two Holland America Cruise ships that shadowed us.

And why was I so amazed I could see that huge white ship a mile away? BECAUSE THE SKY WAS CLEAR AND THE SUN WAS SHINING!

So there, Juneau, I take it all back. All the rotten, nasty things I said about you, I take them all back. I had a grand time…and thanks for the sunshine. But, what’s with all the jewelry shops? 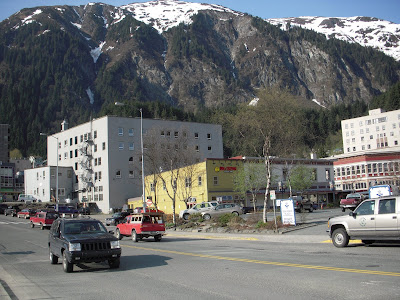 I took this shot to show the mountains, not downtown Juneau, but it's one of the few I have of the business district.