We all know them: those people who have tallied so many acts of idiocy in their lives that we wonder how they lived so long. Surely there is a god that looks after these dolts as they fumble and stumble through their days. It brings to mind what we used to say about someone who survived an horrific automobile accident: “He was too drunk to get hurt.”

Yes, we’ve all known them—those who should be under some form of house arrest, not allowed out without adult supervision, confined to quarters for their own safety.

Take, for instance, me. 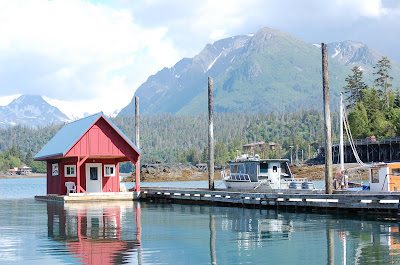 A peaceful day in Halibut Cove.

The water in Halibut Cove was a mill pond one morning, still enough to see my reflection as I launched my blue kayak and managed to get seated in it without baptizing myself in salt water. Then, because occasionally I think before I act, I reached over onto the float and got the binoculars and the two cameras and set them in the kayak. My first destination was the little island across from the place where I’m staying. It’s connected to the mainland by a small rock and gravel bar that is flooded at high tide. Just for the fun of it, I paddled around the island. If I house sit for my friend this coming winter, as I have the past three winters, I will have a gallery full of mental images to flip through whenever I look at that island. 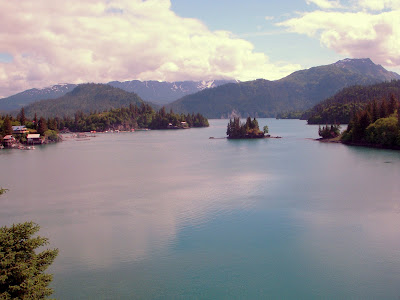 The little island, centerpiece of so many of my wintertime photos.

Then I headed for the narrow gap that divides the cove at low tide. This being almost high tide, I slipped across the bar easily, and stayed near the right shore to get a close up view of the cabins along that side. On and on I paddled, a front row waterside seat for the assortment of mansions and homes and humble cabins that define the cove.

Eventually, I came to The Saltry, the cove’s famous—and only— seafood restaurant, where I crossed the channel to the other side and continued my journey. Reaching home port, once again I was able to get out of the kayak and onto the float without getting very, very wet. For someone my age, this is not an easy accomplishment, because when sitting in the kayak, my butt is maybe an inch higher than the soles of my boots. In addition, the seat slopes back, so rising to a position where I can reach safety is difficult. 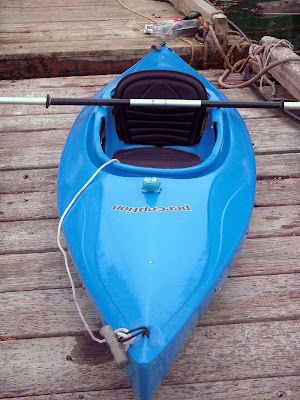 The little blue kayak, meant for large bathtubs, not oceans.

To get the idea, sit on the floor with your legs bent and drawn in as close as you can get them. Now try standing up without moving your feet, making sure you keep your weight centered and not putting too much pressure on one hand or the other, and keeping an equal amount of weight on each foot throughout the process. Now try it in a tippy little kayak on water.

I pulled the kayak onto the float, and turned it over to keep out rain and any flying projectiles let loose by the seagulls and ravens that fly over continually. Then I climbed the ramp to the house and began divesting myself of the various cameras, binoculars, etc., that I take with me. Glancing down, I saw something hanging from the front of my light blue fleece pullover. 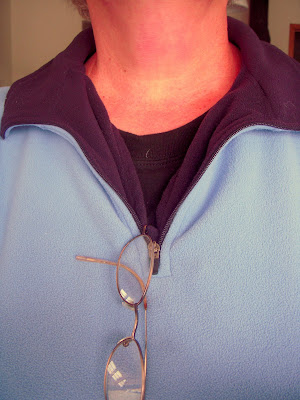 My reading glasses. Incredibly, with one earpiece tucked inside, they’d clung to the front of the soft pullover as I’d paddled all over the cove. I’d leaned over many times to look at something in the water, and yet they’d stayed put.

Two evenings ago, I returned to the cove after a long day fishing for halibut. After the halibut were cleaned and packaged, and my host and his guest left for Homer, I’d taken a shower and slipped on the big red tee shirt in which I sleep.

Then I spent twenty minutes retracing every step I’d taken, looking for my reading glasses. I looked in my room, in the kitchen, dining room, living room, bathroom. Again and again, I walked through the house. I knew I’d had them when I had gotten home, because I’d taken the flash card out of the camera and looked at the pictures on my laptop. I really need them when I use the computer, because the tri-focals I wear provide way too many options for computer use.

Staring out the window while standing beside the dining table where my laptop slept, I mentally reviewed everything I’d done since taking that shower. That’s when those gods that take care of dolts took my hand and gently lifted it to the neckline of my tee. I didn’t even want to look, because, sure enough, my hand closed around that little pair of reading glasses. I continued staring out the window while I wondered how I’d managed to live as long as I have. 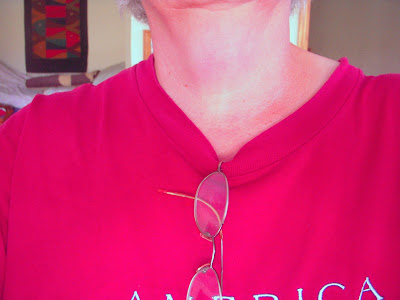 Twenty minutes doesn’t seem like much of a loss—I’ve certainly wasted more time than that waiting for airplanes, doctors and dentists, buses, and so on. But at this time of my life, when I consider Father Time a peer, spending twenty minutes looking for something that is hanging around my neck is a waste of precious time. I could have been doing something better with those minutes—like trying to figure out how to set my VCR to record a program at a certain hour.

On the other hand, now that VCRs are obsolete, maybe I can skip that and learn how to answer my cell phone on the first try, instead of having to call someone back because the call went to the message box before I could get the darned thing to answer.

So, with things like this in mind, a couple months ago I ordered and received an ID band to wear around my wrist. A metal tag on it is engraved with my name, address, phone number, and emergency contact info. My original thought was that it would be a good idea to have in case I met up with a bear while picking up litter along the highway, or got hit by a truck while bicycling, or my luck wore off while kayaking. I’m beginning to think I should wear it all the time. 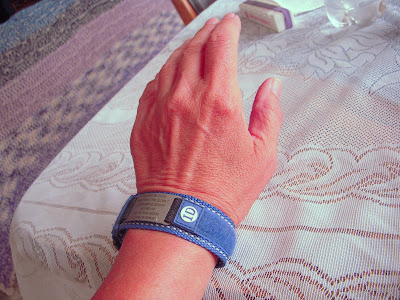 After another kayak excursion this afternoon, this one involving a large stretch of open water with a chop AND a swell when I crossed the cove entrance, I questioned my intelligence about such a foolhardy venture. My kayak is not made for salt water trips. It’s made for peaceful ponds and placid lakes. It’s barely nine feet long. It resembles something you’d play with in a bathtub.

But I really, really wanted to cross to the other side where the oyster farms were. I wanted to take pictures of the rows of gray and blue buoys that mark the oyster homes. I considered the passage for a long time, watched the water carefully. 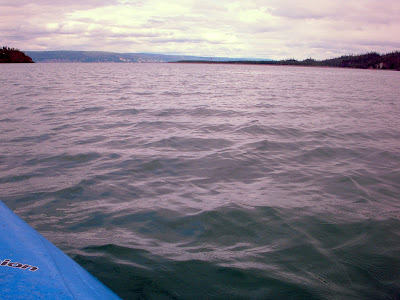 The darkest land marks the mouth of the cove. Five miles across is Homer's East End.
Then (probably because I really wanted those pictures) I deemed it safe enough and made a run, I mean, paddle for it, quartering into the swell and chop, and power-paddling all the way. Still upright when I reached the buoys, I took my pictures, then headed for the nearest shoreline, which I hugged all the way home. 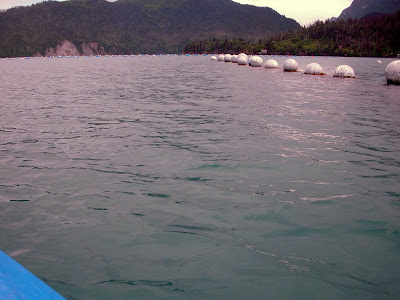 The oyster farms. Halibut Cove and Prince William Sound are famous for their cold water osters.

That wasn’t so bad, I told myself. I knew what I was doing. (I glanced down to make sure the reading glasses weren’t attached to my neckline.) After yet another successful extraction from the kayak, I pulled it onto the dock and turned it over, as rain was falling. I heard something fall out.

When I saw what it was, I knew right away why I had made a successful crossing of that open water. I knew why my reading glasses—along with either of my cameras or my binoculars—weren’t now residing on the ocean floor. I knew why I’d never lost my paddle, even though it's balanced precariously across the cockpit while I take photos. My guardian angel had been with me the whole time. 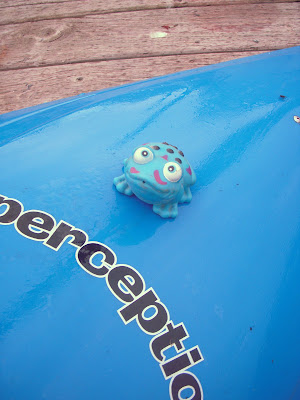 Speckled blue with googly eyes, the little rubber frog I’d fished out of Tern Lake three years ago while ridding the lake of floating litter had been along for every trip I’d made in this sliver of blue plastic. It was my talisman, my amulet, my guardian against sea serpents and perils of the deep. I had totally forgotten it was there.

Which, I suppose, is the way of most protectors. Out of sight, out of mind, something watches out for fools and dolts who, otherwise, should be confined to quarters for our own safety. Just so happens, mine’s a little blue rubber frog with googly eyes. 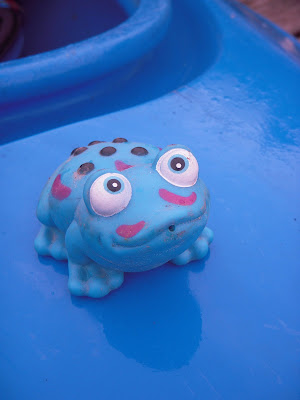