For this I gave up litter-picking?!!!

So there I was, right in my element amongst the beer cans, Taco Bell hot sauce packets, assorted chunks and pieces of wrecked cars, walking along, dum-dee-dum-dee-dee. Vehicles ripping past at 65 mph plus on the seven percent downhill grade, red warning flags on little sticks stuck in the ground where the bad frost heaves are. Nobody cares, and cars catch air flying over the buckled pavement.

Mountains all around, wildflowers beginning to bloom, little creeklet harboring coffee cups and plastic bags, candy wrappers and empty Marlboro packs. Warm sun, just enough of a breeze to keep from getting too hot but more than enough to blow shut the mouth of my big yellow litter sack, courtesy of British Petroleum.

Me in shorts and tee shirt, worn out hiking boots, and brand new fluorescent orange safety vest with chartreuse stripes. Yellow bag in one blue-gloved hand, pick-em-up stick in the other blue-gloved hand, here a can, there a wrapper, fill the bag till it's too heavy to drag any farther, then tie it off and open a new one.

That's when I saw it. 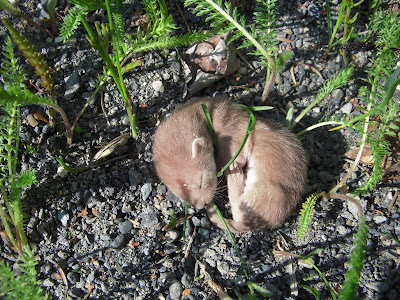 Lying in the roadside ditch, curled up around stalks of new grass and horsetail, a tiny light brown critter.

Large head for its body size, narrow behind the front legs, slinky little body and a thick tail. Not a mouse, or a shrew or a vole for sure. I touched it to see if it was alive. It began to move, but it's so young its eyes haven't opened yet. 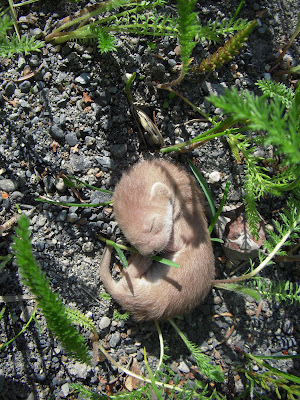 I looked around. No parental carcass on the road, no obvious burrow from which it might have strayed. Starvation and dehydration crossed my mind. Common sense took over after a few minutes and I continued on up the hill, grabbing litter where I found it and stuffing it in the yellow bag.

I reached the top of the hill, crossed over to the other side and came back to where the little varmint was. He was still there, and at least forty-five minutes had passed. Maybe an hour. He couldn't possibly live much longer without liquids. I poured a bit of water on my finger and held it to the baby's mouth. He came alive and began searching for more. I poured some in the palm of my hand, and held him to the water. I think--think, mind you--that he lapped at the water.

I could feel tiny teeth feeling my finger. He searched frantically for his mum and the nourishment he obviously needed. Apparently she was no longer in the picture, and if I left him here by the side of the busy highway, he was raven-bait for certain. 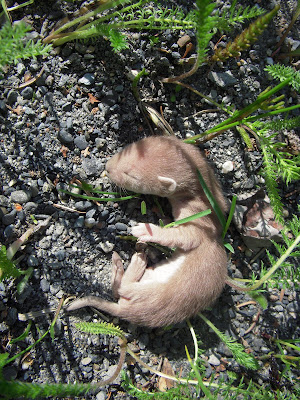 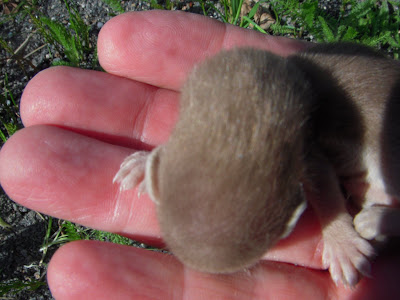 So, with this little baby weasel cuddled in my hand, I walked downhill to my truck, ignoring all the litter. He snuggled into a blue shirt that was on the front seat beside me and I delivered him to the Moose Pass earth mother.

When last I saw him, he had a box with a soft towel, wood shavings, and some sweetened milk... and earth mama was keeping him warm in her hands.