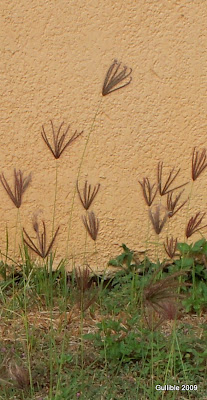 But this was far away from Georgia, far from the perfectly landscaped greens of Magnolia Corner, far from the galleries and telelvision cameras, far from the PGA tour. This was Mazatlan, the El Cid resort golf course. This was where the two-lane paved road crossed behind one flagged hole and the tee for the next.

Blue water, scalloped by a slight breeze, on each side. Across the larger of the two ponds, exclusive villas fronted the greens, backs to the water and the silent, unfolding danger. A silhouette of a tall, slender wading bird broke the blue above the edge of the pond. Ten feet or less away, another silhouette, low to the ground, motionless but spiked with danger.

I stood off a ways, camera in hand. No, I thought. Not the heron. You're an herbivore, You don't eat birds.

The spiny, prehistoric iguana didn't care a whit about what I thought. It was stalking the blue heron.

With incredible swiftness, the iguana flowed towards the heron. At the same time, the heron lifted into the air, huge wings grabbing air, long legs trailing beneath.

The iguana moved into the sunlight and watched its prey escape. 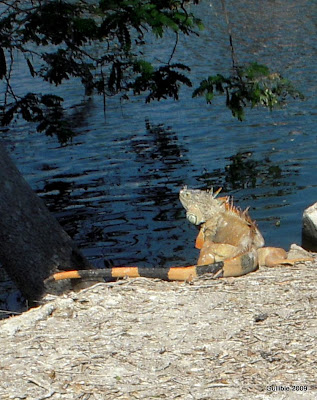 A few yards along the bank, another silhouette--a great egret cooling itself in the shade. Unbelieveably, another five foot long iguana was stalking it, creeping closer and closer. 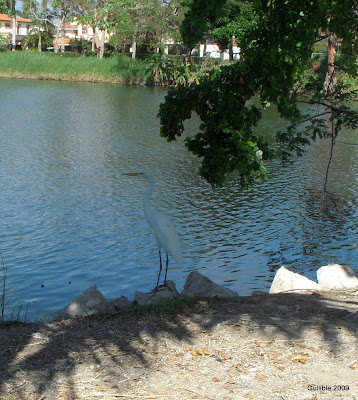 The egret watched carefully--flee the lizard or flee the human? 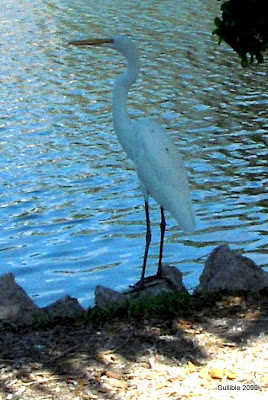 The dinosaur inched closer. At the base of a tree, a turtle sunned itself on the warm trunk. 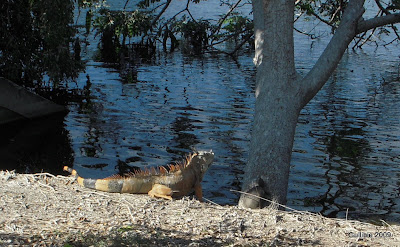 The egret took flight and landed in the upper branches of the tree. 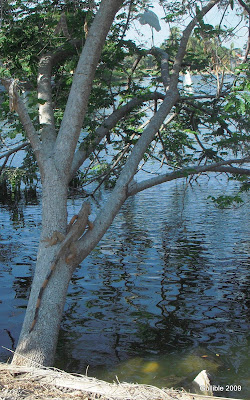 Quickly the iguana shot into the tree, climbing over the turtle and knocking it into the lake. 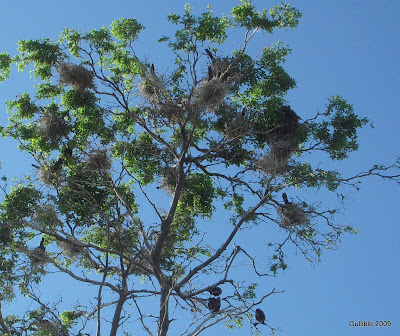 Watching all this from the tree top where their nests clung to tiny branches, were black anhinga birds. 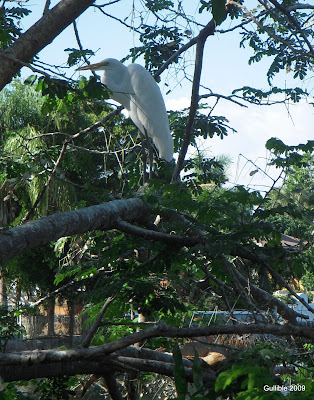 Four feet below the egret, the iguana froze. Motionless, dangerous, almost invisible but for the tan spot where the sun had pierced the thick canopy of branches and leaves. Close by, in the same tree and only a couple feet above the iguana, an anhinga hung out its wet wings to dry. 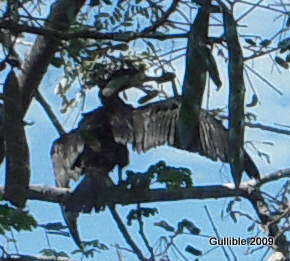 Danger and drama hung in the air, but neither reptile nor avian moved. The human moved away after a time.
Across the lake stood the great blue heron.

On the other side of the street, just yards from the traffic moving through the resort grounds, birds and turtles lined the concrete bank of the pond, oblivious to the danger unfolding across the way.

This was better, much better, than a lean, mean golfing machine needing to birdie the 18th for another win.
Posted by Gullible at 9:16 AM