A Year of Living Dangerously?

I turned sixty-eight a few days ago. I was pretty stoked about it, too. It seemed like a cool age to be. Not like sixty-seven, which is a pretty out there number. Kind of like a middle child that has trouble defining its own identity.


Sixty-seven is only a couple years past sixty-five, a couple years into Medicare, and that’s pretty much all sixty-seven has going for it. Sixty-eight, now, there’s an age with some depth to it. Sixty-eight is close enough to seventy to hang in its aura, and seventy means it’s official, you know, like you are officially an old survivor.And I’m really looking forward to seventy.

But, I might have been too optimistic about the benefits of sixty-eight, might have expected a wee bit too much from it. Here’s what’s happened in the few days I’ve been hanging around sixty-eight:

I missed a sidewalk transition in the dark and twisted my ankle. It isn’t sprained or anything like that, and doesn’t hurt all the time. But, when I sit for any length of time, it stiffens up and then takes a while to get it loose again when I try to walk.

Then I slipped climbing down the ladder into the pool, and my other leg ended up behind the ladder. I don’t mind the red two-inch scrape on my shin, or the welt and big green bruise behind my calf. The thing I don’t like at all is the stubbed, bruised, and very sore toe. That does hurt. 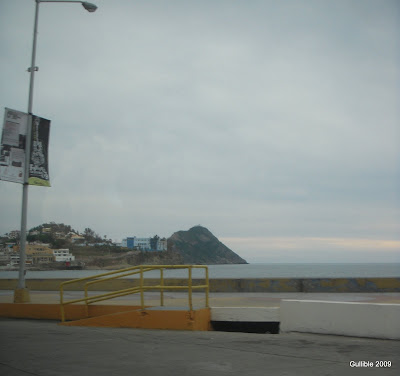 El Faro lighthouse, the world's tallest natural lighthouse, which means it's up on a 500 ft.-plus hill.

Yesterday I went for a walk with Kathy and Ellen, a gal from California who lives full time here in Mazatlan. Our goal was the Mazatlan lighthouse, the highest functioning lighthouse in the world. From a distance I could see the switch-back trail leading to the summit. No problem. I was wearing my Teva walking shoes with the good soles. 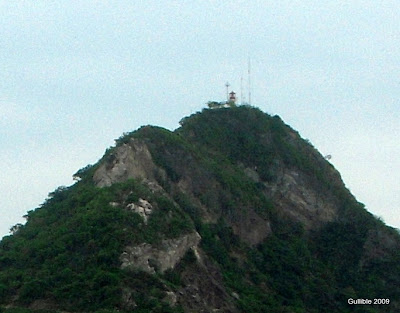 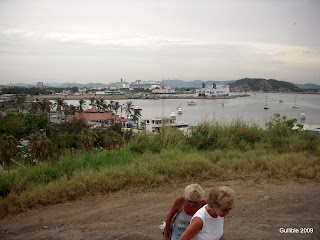 Once at the top, I bought a bottle of cold water from a vendor there, and walked out to the overlook for a bird’s eye view of Mazatlan. Above, dozens of frigate birds whirled on the air currents, huge birds with wing spans of up to six feet. I had just reached the overlook when I realized I wasn't wearing my glasses. My new, hard-to-see rimless glasses, my very expensive trifocal lens glasses. We retraced out steps around the lighthouse, again and again. I thought I had set them down once on the rock wall alongside the dreaded stairs, set them down to rinse my sweaty face with water. 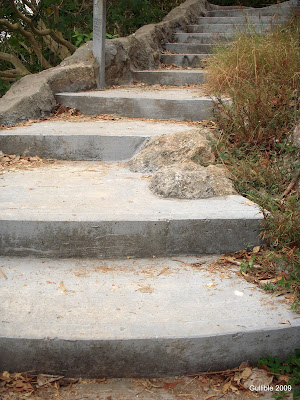 After we assured ourselves the glasses were nowhere at the top, we started down the concrete stairs, which were even more difficult to walk down. That’s when the twisted ankle and the stubbed toe reminded me that I was sixty-eight and suddenly clumsy. When we reached the end of the stairs, I went back up by myself. Again I searched for the glasses, but couldn’t find them. 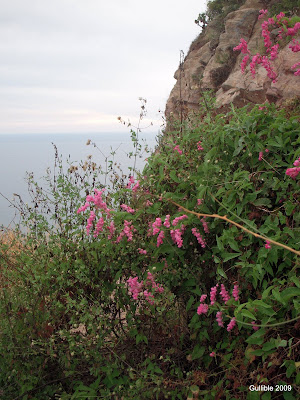 I worked my way back down the miserable stairs to where Kathy and Ellen waited. As we walked down the rocky, dirt and pebble-strewn trail, dozens of young people passed us on their way up. A cyclist with a single speed bike raced by, climbing the dirt part of the trail three times that we knew of. Two young men stopped at the concrete stairs and did push-ups. 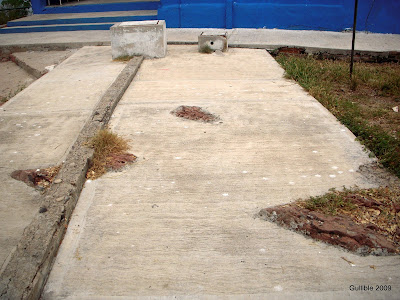 Rock in the way of the sidewalk? No problemo. Just pour the concrete around it.
We stopped at a spot with a good view and talked about the cyclist and his strength and stamina. We were standing still. All of a sudden I was on my butt. “That’s exactly what I did a few years ago,” said Kathy. “My feet just went out from under me and I fell.” 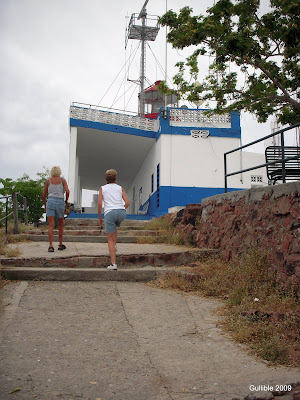 I looked down at the trail. It was mostly hard rock, but had rock pebbles on it that acted like ball-bearings. No harm done, but I was a bit more careful about where I stopped to talk. Which means I was talking when my feet went out from under me again. This time, though, I scraped up my left knee, and blood trickled down my shin, intermingling nicely with the previously-scraped shin. 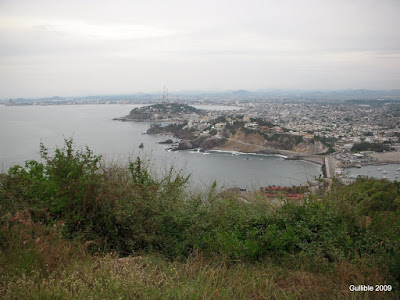 All in all, I’m beginning to think about sixty-eight a bit differently. Is this an omen? The Year of Falling Dangerously? Add all my scrapes and bruises and abrasions to the dozen or so red and swollen mosquito bites, and my legs from the knees down look like they’re adorned with red stripes and polka dots. 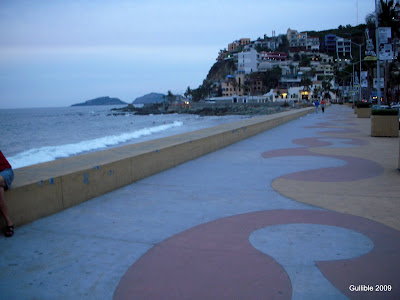 The Malecon of Mazatlan, a thirteen mile long concrete walkway, intersperesed with statuary and monuments, follows the coastline of Mazatlan and connects the Old Town with the tourist area.

Oh, what the heck. I’ve also been lucky enough to have carne asada twice this week.
Posted by Gullible at 9:08 AM