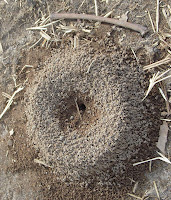 A friend recently wrote that she was frustrated with her computer because a crumb of biscotti landed on her keyboard and wedged itself under the down key, making navigation with the arrow keys difficult. Then she asked about the crumbs that fall into our lives and jam up the works.

Each day I walk along the narrow park just outside the rear gate of the El Cid resort complex in Mazatlan, and pause to watch tiny black ants at work. Grain by grain they haul out crumbs of hard-packed dirt, climb the ever-growing bulwarks around their excavation, and place their burdens on the outer slope of the mound. Then they scurry back to the opening, bypass the ants coming out, and fetch another grain. Each grain is placed on the outer slope, never on the inner one, so they don't have to carry that particular one again.
I was thinking about life today as I watched the ants, about the way each failure, heartache, disappointment, and rejection drops crumbs in our paths, crumbs that become ill-compacted slopes of ever-increasing danger. I recalled when I was in my early twenties, surrounded and suffocated by crumbs. While they were mostly of my own making, I could not see a way around them or over them or through them, and so I continued to let them pile up around me, like a mason walling himself in brick by brick, until I was secure in my fortress of failures and disappointments. Secure, where neither I nor anyone else could hurt me ever again.
Years came and went, and I remained steadfast and safe in my fortification. One day, when I wasn’t looking, I found a man who intrigued me, and I stuck my head above my defense works long enough to marry him. Twenty-five years passed, years during which I pushed away some of my grains of seclusion.
Then a disease called Alzheimer’s arrived in a dump truck of behemoth proportions. For five and half years, it dumped lead-weighted crumbs and rocks and boulders. Late one night it all caved in upon me. I found myself slipping over the precipice from which all my life’s sorrows had been excavated. It looked bottomless to me, its vertical walls plunging into a darkness with such an absence of light, I thought I had lost my sight.

Farther and farther I slipped into the nothingness. Crying and shaking, I dredged up every crumb that once had been a part of my ramparts, and placed them on my shoulders, thus increasing my speed into the void. Quite near the bottom, I reached at random into a shoe box of forty-year-old letters and began to read.

Suddenly my descent jerked to a stop. I read another letter, and another and another and another. Some I read more than once, more than twice. One, the first one, I read again and again until I almost had memorized it. Finally, by 7 a.m., I had read all five dozen letters. These were my letters, letters I had written when I was twenty-three and mailed to a friend in another state, who many years later returned them to me. I avoided reading them once I saw the postmarked dates. I didn’t want to revisit those times, yet I was unable to dispose of them.

I set the first letter down. Its import was of a size and weight so extreme it filled the black hole beneath me, and I climbed upon it. A second letter became a second step and so on, and I made my way towards the light above. When I ran out of letters, I began to use the crumbs and rocks and boulders, discovering that rather than stumbling blocks and barricades, I could turn them into stairs.

When I reached the top and stepped onto the level, I set about cutting those crumbs and rocks and boulders down to a manageable size. I reconsidered, forgave, made amends, and reconnected. I put some into previously unconsidered perspectives. I cried, I laughed, I thought, I talked. I hugged a lot, too. Mostly though, I wrote. I wrote for hours and days and weeks and months. I wrote to make up for the forty years I hadn’t written. I wrote to learn and explore. I wrote for catharsis and for the pure joy if it.
With each word, each sentence, each paragraph, I was cutting, shaping, sanding, and polishing those crumbs and rocks and boulders. I carried many of them up the ramparts and tossed them into the hinterlands on the other side, where I never need worry about them again. Some I used as foundations for my words to build upon. And others? Well, it’s a work in progress, as they say.

Which brings me back to the friend with the biscotti crumb stuck under her down key.