The Mexican Journals, Ch. 2, Winging' It

So here I sit, propped against the headboard of a queen-sized bed in a Seattle Best Western, but, oh, how I wish I could have stepped outside of that Alaska Airlines 737 that brought me here. Just for a moment, just long enough to snap a couple photos of that moon off the port wing.


A huge half moon, dark and dusky burnt orange, irradiating the charcoal wisps of stratus clouds streaming across its face. An ominous moon, one that needed only the silhouette of a broom-navigating, peaked cap-witch before it, and scary stories spoken in the darkness of severed hands and mysterious cold spots and characters named Damien and Lillith.


A foreboding, stunning, apocalyptic moon. How I wish I could have photographed that moon—standing still with my camera on a stable tripod--and not bouncing through the air at a couple hundred miles an hour while descending into Sea-Tac Airport. And all of it unseen by the residents of greater Seattle, who slept under and blanket of sodium vapor fog.


But my jet was determined to land, was committed to landing, and the photograph I do have is the next thing to none at all. Upper right, that fabulous moon. Diagonally across the scene is the leading edge of the wing, lit by the landing light, and below that, the spar support under the wing. 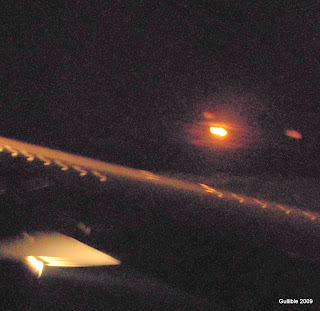 One of the things I really like about Alaska Airlines is that it employs someone with great imagination and a large paint budget. Most of its fleet bears the iconic smiling Eskimo on the tail. Taxiing up to the concourse, I saw another--the blue Eskimo with a colorful lei around his nack, commemorating the Hawai’an routes the airlines flies. 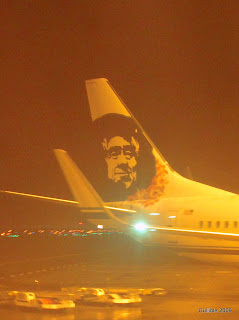 Still another was at the Anchorage airport. This one features an Alaska dog musher, the musher standing tall on the vertical tail stabilizer, hands on the handlebar. Among the critters pulling the sled is a huge bear, something that might be one of the state ferries, and with a husky, of course, in the lead.


I’m looking for the fish plane--the one painted like a giant salmon, scales and all. I saw it a couple years ago, and it’s impressive. 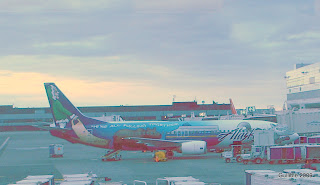 But here, in my room at a Best Western, it’s time for the rest of the sandwich I bought to eat on the no-food-service airplane. It’s squashed flat enough to have originated on flatbread, but it began it sandwich life as Subway’s Italian herb and cheese bread. No matter. The combination of Italian meats, provolone cheese, lettuce, olives, vinegar, and spicy mustard is just what I need right now. 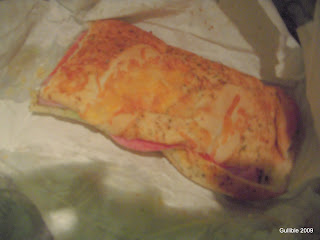