Eleven p.m. Friday night. I tricked Pablo the parrot this time. He had no idea anything was amiss. I’d kept the suitcase out of sight, wore my old, bummin’-around-the-house clothes. It wasn’t until he saw Jen, the parrot/house sitter, that he realized he’d been had. Then he cut loose with a couple screeches and a few raucous squawks of protest.

You think it’s not nice to fool a parrot? Trust me, it’s better this way. 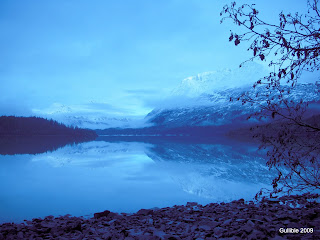 I left in a hurry, drove into Anchorage and stayed overnight. I spent half the next day in a circus of getting a prescription refilled. I won’t go into the details; I’m on vacation and supposed to be relaxing. Retelling the fiasco of that prescription would be counter-productive. It’s been a comedy of errors since its inception, and I have no hope it will get better. There are too many players: a mail order prescription program, a name brand drug rather than an approved generic, an emergency 30 day trial prescription because I was having a reaction to a previous med, a supply of samples that weren’t left with the urgent care facility as previously planned, a refusal by the mail order company to fill another 30 day prescription because I wasn’t eligible for a refill until January. And so on, not to forget an impending flight outta there.. I’ve spent $160 so far for meds that should have cost me only $40 for 90 days.


I’m here to tell you about the newly reopened concourse at the Anchorage Ted Stevens International Airport. Yes, that Ted Stevens, our former US Senator-for-life Ted Stevens. See? That’s why it’s never a good idea to name something after someone until they’ve kicked the bucket. Though his conviction on failure to report monies was thrown out by the Federal Court due to extreme prosecutorial misconduct, it might be deemed by some to be a bit of an embarrassment to have a major facility named after someone who has been disgraced. But Alaska loves its Uncle Ted, and does have habit a ignoring such things.


Anyway, after a few eras and a number of ages, plus or minus an eon or two, the reconstructed A and B concourses opened again for use. I took a stroll down the B concourse and was delighted at the artwork on display. Suspended from the ceiling are a whole flock of geese in flight. 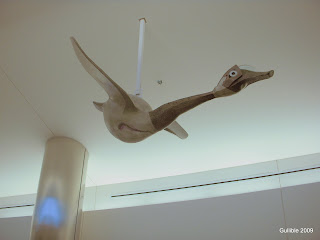 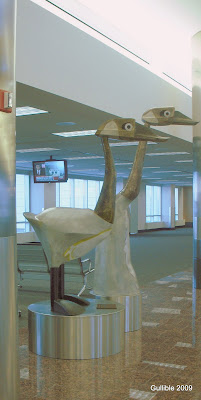 Off to the sides are other standing geese:


And, a momma goose with her gosling: 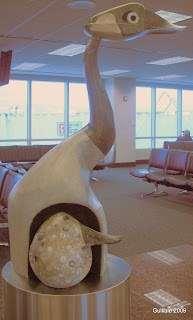 …with a close-up of the gosling: 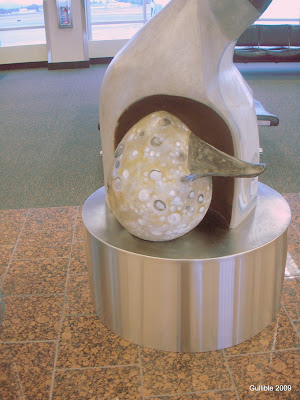 Upstairs on the mezzanine, is a nice collection of the various types of native art, such as this one of various woven grasses. 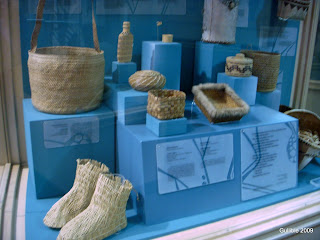 Gotta go. They’re starting to board my flight. 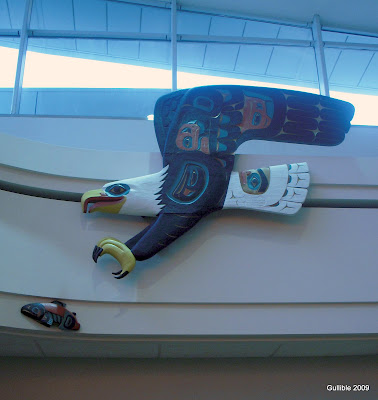