The Russian Journals, Part Eighteen, The Fortress and the Cannon

Even as I am trying to force my brain to agree with her, I know darn well that horrendous noise wasn’t thunder. That we are standing in a building erected in the early 1700s, in which almost all the former tsars and emperors of are buried, isn’t at all comforting, either. Nor is the fact that ancient building is in St. Petersburg, the womb of many of Russia's revolutions. 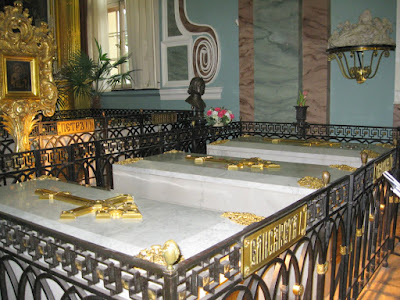 Around me I see other tourists realizing the same thing, their gazes rudely yanked from the magnificent frescoes and icons on the walls and ceilings of the cathedral, to meet the eyes of other startled tourists. 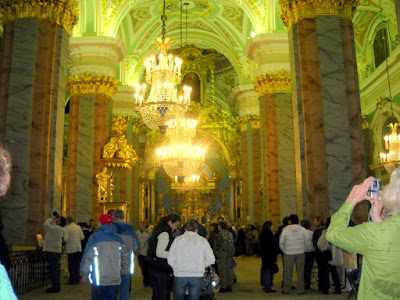 “No,” says the tour guide, “Not thunder, nor is it the start of another revolution. It is the noon cannon.”

She adds that they are so used to it, they forget to warn tourists. Sighs of relief, eyes back to the frescoes that adorn the Cathedral of Peter and Paul in . The cannon from which the blank shot was fired also is located within the walls of the compound, known as the Peter and Paul Fortress, where the cathedral and other buildings are located. 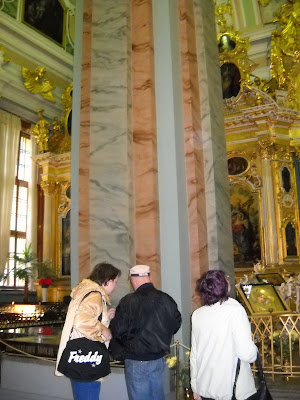 In 1703, Peter the Great decided that a would be built in a northern swamp on the delta of the . Its primary purpose would be a fortress to defend the lands recently recaptured from the invading Swedish army. The fortress built there was called the Peter and Paul Fortress, named after apostles. Within the walls and bastions of the fortress, the Cathedral of Peter and Paul was begun in 1717 and completed in 1733, eight years after Peter’s death. 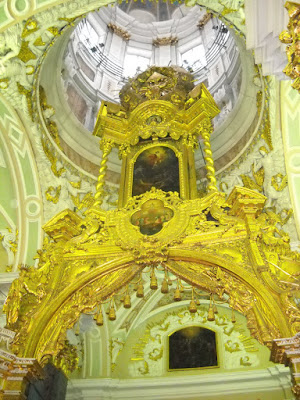 Though badly damaged during the WWII siege of , as was known during the communist rule, the fortress and its buildings were meticulously restored. Entering the cathedral, my first words were, “Oh, my.” Magnificent columns of what I assumed were pink and green marble were interspersed with icons and frescoes. Later, closely examining the columns, I now think they are painted to look like marble, but the overall effect is a breath-taking, opulent, baroque masterpiece. 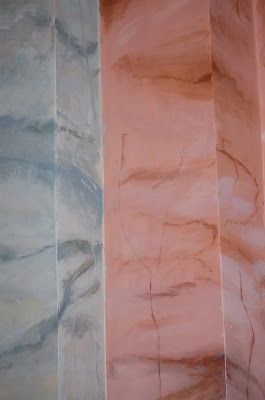 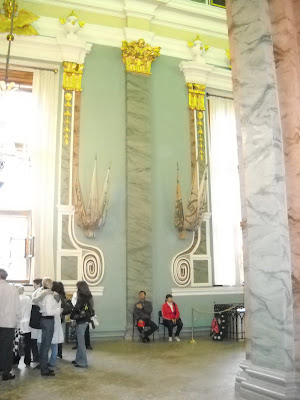 This photo is the closest I have to true color, the best I could do under fluorescent lighting.

Along the sides and front left corner of the great hall are the marble tombs of all ’s tsars from Peter the Great onward but two, Peter II and Ivan VI. Peter’s tomb is located in a place of honor at the front of the hall and is adorned daily with fresh flowers. 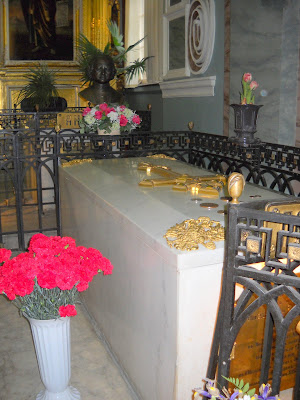 Off one corner of the cathedral is a small room known as the Catherine Chapel. In it is a small tomb, the final resting spot of the meager remains of Tsar Nicholas II and his family. Alabaster plaques on the walls list each family member and the appropriate dates. 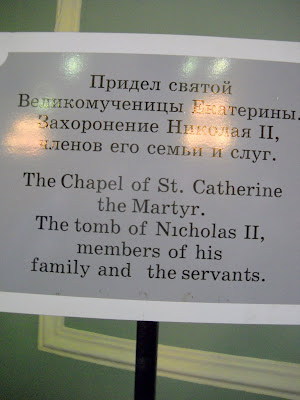 Almost a century ago, the tsar and his family, along with their servants, were murdered by Bolsheviks following the revolution of 1917. They were the last of the Romanovs, the family that had ruled since the late 1600s. Their remains were first discovered in 1979, but kept secret until after the collapse of the in 1991, when they were exhumed from a hiding spot near where they had been murdered, burned, and buried. 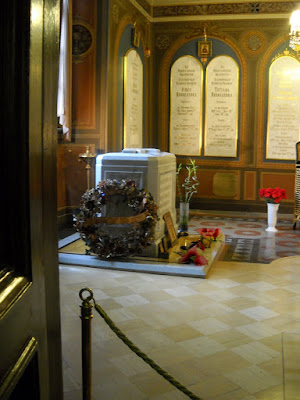 Yet to be added are the remains discovered last year of his son Alexis and daughter Maria. Genetic testings thus far have shown the newly-discovered remains to be Nicholas’s children.

At 404 feet and three inches high, the gilded spire of the bell tower within the Peter and Paul Fortress, with its angel holding a cross, can be seen from all over . It has been the tallest building in the city, and only a communications tower exceeds its height. Modern construction may now have done so also. 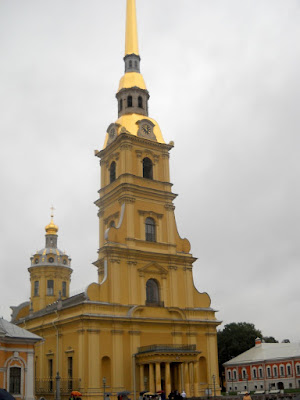 This fortress, this cathedral, is our introduction to the riches and beauty of , and there is much more to come. One steeped in religious allegory of the Russian Orthodox Church could have better appreciated the frescoes, but for me they remain cloaked in mystery—a beautiful, magical mystery. 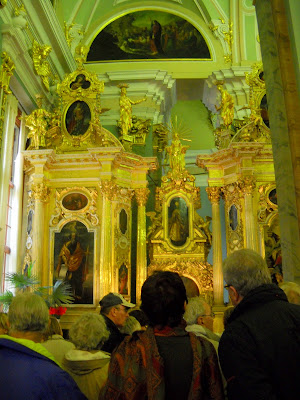 Just before we leave, we are introduced to an important employee of the Peter and Paul Cathedral. I don’t catch its name, but all I need to know is that this cat is the official cathedral mouser. Such an important position in a place with such valuable antiquities. 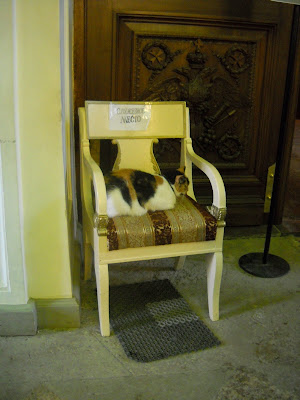 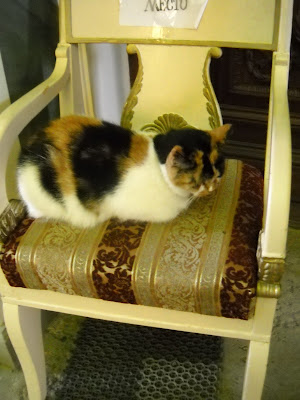 We exit the cathedral by a side door, walk out into the courtyard to a softening rain. I am silent walking back through the main gate and climbing aboard the coach. 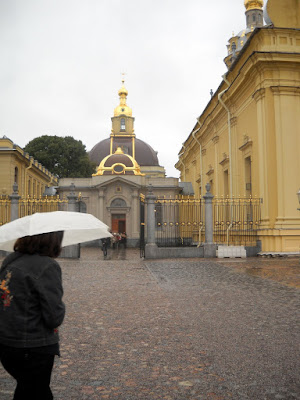 Tsar Nicholas and his family had been murdered ninety years ago, yet I have heard about them—and the sway the mad monk Rasputin had over them—all my life. 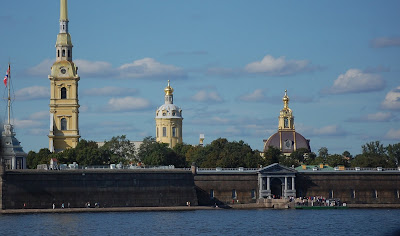 The Peter and Paul Fortress

Now, seeing the small marble tomb that encased the pitifully few bones that remain of this last Romanov family, I feel as never before how Russia is coming to terms with its tortured past. 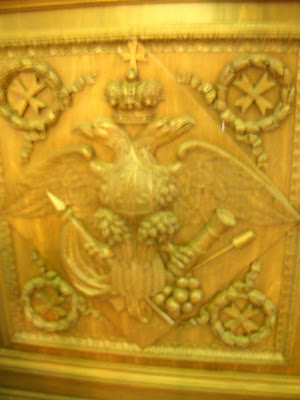 The double-headed eagle emblem of Imperial Russia, and of the current Russian Federation.