A lone swan circled Tern Lake Valley last Friday, watching as the rest of the flock headed to the next stop on their migration out of Alaska. Below him, only a couple small patches of open water could be seen. In one of them thrashed his frantic mate, unable to fly because of wing damage from an arrow shot into her several weeks ago.

Volunteers from the Alaska Sealife Center in Seward caught the injured female, and x-rayed it to determine the extent of the damage. The arrow had pinioned the right wing to the body, and pentrated four inches into the swan, just missing the spine. The arrow was removed and the swan returned to Tern Lake, hopefully to heal and join the autumn migration. 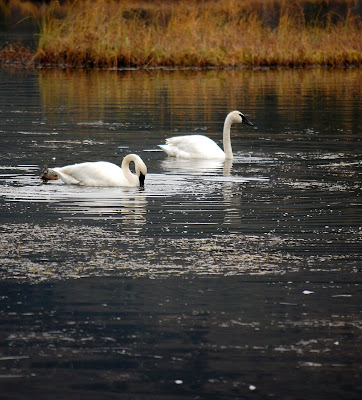 Upon its release, the swan swam directly to its mate. As the weeks passed, the injured swan healed, spending most of its time on the grassy islands while nearby its mate hovered protectively. More swans came to the vegetation-rich lake to feed, a late winter giving them more time to stock up for their long flight south.

Last week all the other swans took flight, circling for a long time to give the injured swan a chance to join them. She could not, as she is unable to fully extend the injured wing. Her mate circled and circled, then disappeared as night fell.

With nightfall came colder temperatures and ice began forming in the small open patch where the swan idled. By morning, the lake was frozen entirely, and the swan had no water or food.

Again, volunteers, now able to walk on the ice, caught the swan and transported her to the Sealife Center for evaluation and treatment.

Today, Friday, Nov. 6, a lone swan is at Tern Lake, walking across the ice.

That huge portion of the romantic in me chooses to believe that swan is the mate, still looking for the injured female.

That wee iota of logic in me says this could be any swan. But landing on a frozen lake? No feed available? Very illogical. There had to have been an irresistible draw.

That smidgen of the practical in me says this swan is able to fly, and soon will join other swans. I hope so. I hope it leaves soon. 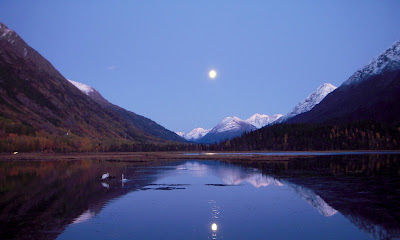 She's safe, big guy. It's okay to leave now. Maybe one of those honks we heard from her meant this: Auf Wiedersehen (Goodbye, until we meet again.).
Posted by Gullible at 5:10 PM