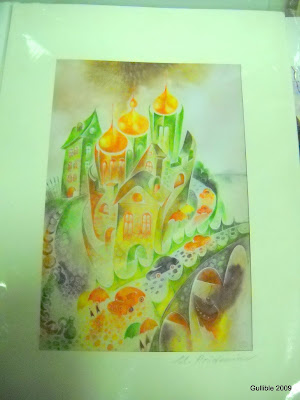 Our coach is returning to St. Petersburg from the countryside where we toured the Catherine Palace. My head is awhirl with images of its opulence and splendor.

This is one of several palaces and cathedrals on our itinerary, and by now we are sated, their gilded carvings and finery blending in with one another.

No wonder they had a revolution, I think. In a land where millions starved and slaved in servitude, the richness of the palaces and churches seems obscene. Our guide interrupts my thoughts: “We are approaching a rise in the road,” she says. “This is the closest the German Army was able to get to Leningrad (St. Petersburg) in World War II.”


Suddenly everyone on the coach is alert. Black and white photos images on display at the Catherine Palace come to mind, photographs of the massive destruction and looting done by the German army.


The coach traverses a small rise, more of a gentle swell in the road. Had we not been told of its importance, we would have missed it altogether, may not have seen the memorial to the left of the two lane highway. Ten miles
away is the skyline of the city, known as Leningrad during the war and as recently as the 1990s.


Each day we have been hearing pieces of St. Petersburg’s history, and each day this city’s determination to survive becomes more and more apparent. Beginning with the first of a couple hundred long wave floods from the Gulf of Finland only sixty days after Tsar Peter the Great ordered the construction of a fortress on the Neva River delta, through invasions by Sweden, Poland, Germany, and other countries, this city has stood resolutely. 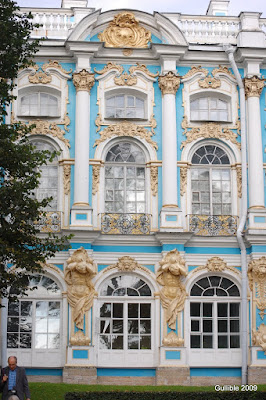 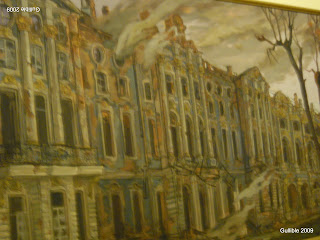 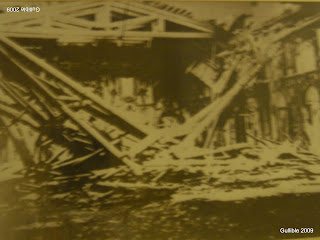 Perhaps its greatest challenge was during WWII, when it endured a siege unlike any other city in the modern world. Several times during our travels through the city, we passed a building with beautiful pink granite columns. Several have large chips blasted out of them from German shell shrapnel, a daily reminder to the people of the city of the hardships they endured and conquered 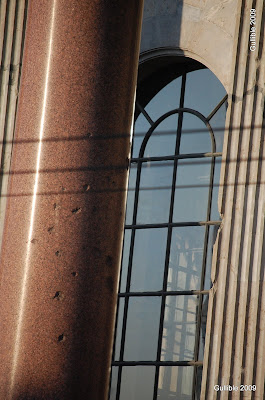 The next day our coach heads out of the city in the opposite direction, to another palace on the shores of the gulf. The distance isn’t far, but traffic congestion, highway construction, and busy two lane roads increase the travel time. Along the way, our guide begins to speak of the siege.

She speaks with some authority on the subject, but she is far too young to have lived during the war. Her grandmother, she says. Her grandmother lived through the nine hundred days of living hell, and like most veterans of traumatizing events, is reluctant to talk about it.

Almost immediately after Josef Stalin and Adolf Hitler signed a non-aggression pact, Nazi Germany invaded Russia. Two and a half months later, Leningrad was surrounded on three sides by the German army from the south, and by the Finnish army from the north. Refugees pushed north and south by the invaders swelled the city’s population and strained its resources. The civilian population of three million refused to surrender.


Artillery and shells pound the city day and night. Two major food warehouses are destroyed and rationing begins. Every available plot of land is planted with potatoes, carrots, and cabbage. Soon each person is rationed only a quarter pound of bread a day, and eventually the bread dough is mixed with sawdust to extend it.


The Luftwaffe drops leaflets over the city: “Surrender or die.” Civilians fight at the fronts. Winter comes and freezes the Neva River and its headwaters, Lake Ladoga. An ice road that came to be known the “Road of Life” is built on the river and lake. People are evacuated past the German army, though many die from constant bombardment. Supplies are brought in by the same method. Drivers leave the truck doors open so they can jump to safety if the trucks break through the river ice. Farmers in the country send all the food they can.

None of the massive efforts are enough. There is no clean water or heat. Books and furniture are burned first, then floorboards are ripped up in vain attempts to keep from freezing. Brutal , unprecedented cold, temperatures far below freezing, add more misery to a population already starving.

Teenagers are the first to succumb to starvation, but hunger knows no boundaries. During two months, January and February of 1942, 200,000 people die in Leningrad of cold and starvation.
But the cold includes the German army in its misery, and by January of 1943 the siege is broken. A year later, it is fully lifted. By this time, an estimated 800,000 to a million civilians have died, most buried in mass graves.

In 1945, Leningrad is given the Soviet Union’s first ever “Hero City” award.


Fifty years later, starvation again threatened the city. This time, the enemy came from within—the “planned economy” of the USSR and the collapsing Soviet Union. Rationing was implemented, and the city received food air from abroad. With the fall of the Soviet Union, more than half the city’ residents voted to restore the name to St. Petersburg.

Though it had been the capital city of Russia since Tsar Peter the Great deemed it so in the early 1700s, that status was returned to Moscow after the Bolshevik Revolution in 1917. Today this cradle of revolutions, this Hero City, thrives, and retains a strong rivalry with Moscow.

With the Bolshevik Revolution and the overthrow of the tsars, the people wanted the excesses of the Romanovs left to remind them of why they had a revolution. Thus, the great treasures of the Catherine Palace and Peterhof remained. During World War II, enemy armies occupied these palaces, looting and destroying and setting fire to them.

After the war the people cried for their towns to be rebuilt the way they had been before the war. And, they wanted the palaces rebuilt also. 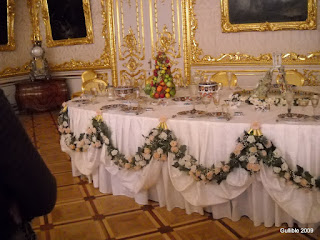 
This, they said, is who we are. This is our heritage. 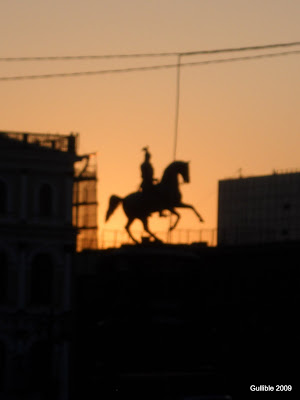