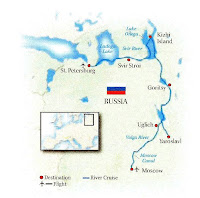 We’re tired, we tourists cruising the Volga-Baltic waterways of Imperial Russia. We’ve had a full day, and yet the siren songs of after-dinner activities waft through the air.

We attended an extraordinary lecture on pre-revolutionary Russian history in the morning, and toured the ancient Kirillov monastery at Goritsky in the afternoon. We’d been treated to a bliny (crepe) and vodka tasting once we were back on board.


Then, a Russian dance class for those who were still standing after the free-flowing vodka. For those unable to stand, or who didn’t want shin splints the rest of their lives, a movie was playing, “Tsars of Time of Troubles” in the Panorama Bar.


At dinnertime, we discovered pirates had taken over the ship. One pirate untied my shoe laces as I entered the dining room. A second pirate tied them together. Our tableware was thrown casually in a huge pile, our chairs in disarray, our servers dressed in casual jeans and striped shirts instead of their usual elaborate costumes and uniforms. 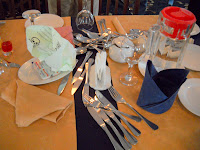 A folklore concert and live music for dancing beckons the night owls, and another movie at 10 p.


A small group of us assemble after dinner in the small bar at the stern of the ship. There aren’t many—we passed the word to a few fellow tourists whose company we enjoyed, whom we thought would like to join us. Some are pulled away by spouses so as not to miss the folklore concert.

The rest of us are quiet, lost in memories of why we are there in this quiet lounge instead of somewhere else on the ship. The bartender isn't yet on duty, so there will be no toast.

Most of us just want to re

This evening is September 11. This is the eighth anniversary of the day that has become known as 9-11, the day radical terrorists attacked our country and took the lives of thousands of innocents.

We are traveling in a country that had once been a bitter enemy, one we had feared every day of our lives for almost as many decades as we had lived, one that has opened its arms wide and welcomed us. The irony of this is not lost, though this particular country had not been at fault in those attacks.

We considered making a toast at the vodka-tasting activity earlier in the day, but the joyful atmosphere was not the appropriate venue. We hastily passed the word “after dinner in the small bar.”

And so we assembled.

“We will always remember. We will never forget,” we promise as we remember and pay homage to the dead and all the survivors of 9-11. 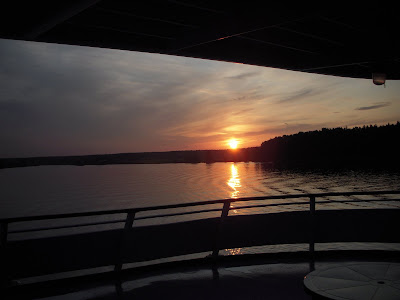 Email ThisBlogThis!Share to TwitterShare to FacebookShare to Pinterest
Labels: Sept 11