There are no foreign lands. It is the traveler only who is foreign.
― Robert Louis Stevenson, The Silverado Squatter

Half past three in the afternoon of our first day at Mabula Game Lodge, we gather at the covered entrance.  Laid out on tables for us are coffee, tea, and cookies.

Across the paving bricks, Land Rover safari vehicles await their passengers.   Some are covered with canvas; some are not; all are open on the sides.   An appetizer tray comes to mind, or a pupu platter, in which tourists are served up as snacks for predators or for the just plain ornery. 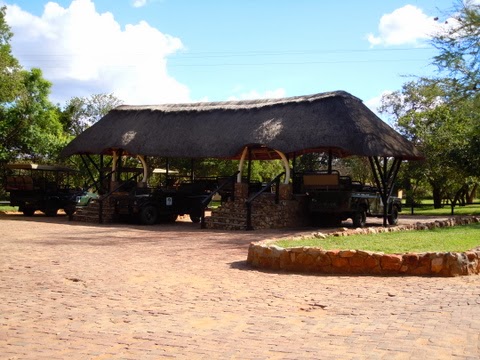 We load up, Sam driving, and into the reserve we go.   I am struck by the realization that I have no dimensional scale here.  Though I avidly search for animals, I have no reference as to their size.

I know elephants are huge, but in relation to the trees and brush, how huge?  It is a novel perception for me.


We head immediately to a spot where Cape Buffalo were seen and find them a hundred feet off the trail in brush.  They usually graze at night and find shade during the day.


Of the big five, the Cape Buffalo is considered to be the most dangerous, not only because of its bad temper, but because it is so unpredictable.    Wounded buffalo have been known to ambush and attacks hunters.  Local lore claims that around 200 people are killed by the buffalo every year, but the same claim is made of hippos and crocodiles.

Nonetheless, the Cape Buffalo is also known as the Black Death or the Widowmaker.

Though  similar in appearance to the Asian water buffalo, they are not closely related, nor are they the ancestor of domestic cattle.  The African buffalo has never been domesticated, entirely because of its unpredictability. 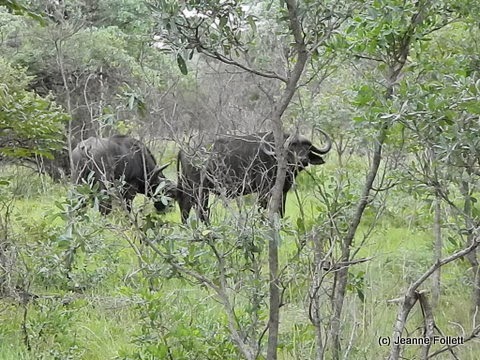 According to Brian, a captive Cape Buffalo, a perfect specimen,  recently sold for $2 million to a private breeding concern.

They can grow to more than five feet at the shoulder, seven to eleven feet in length, and males can weigh a ton or more.  The horns fuse at their base, creating an armor-plated boss that not even a rifle bullet can penetrate.  The horns can measure 40 inches across at the tips.

These buffalo have demonstrated remarkable memories and strength.   Stronger than an ox, they can easily tip over a vehicle, a not-so-comforting thought.

A guide radios that he has seen the elephant herd and we arrive soon after to see a half-dozen or more in thick trees and brush. 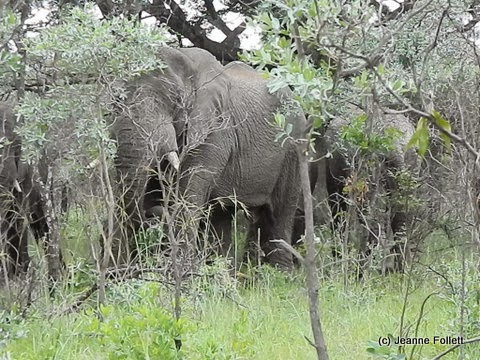 Occasionally one moves into the clear, but mostly we see long trunks reaching upwards and breaking off tree branches with a sharp “crack.” 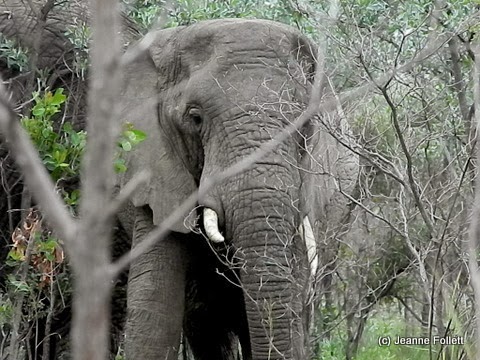 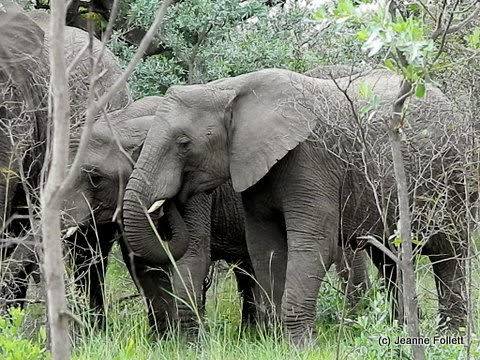 Two of the Big Five so far on our first drive, and we have more to see.


We pass zebras (pronounced zeh-bra) in Africa.  They are smaller than I thought they'd be, but just as striking. 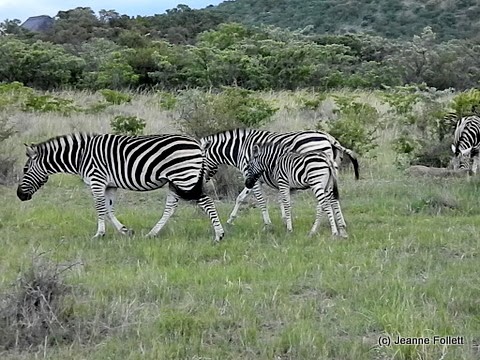 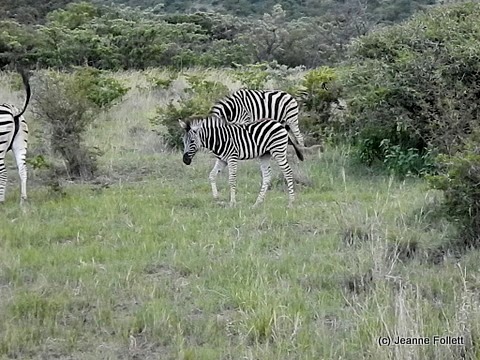 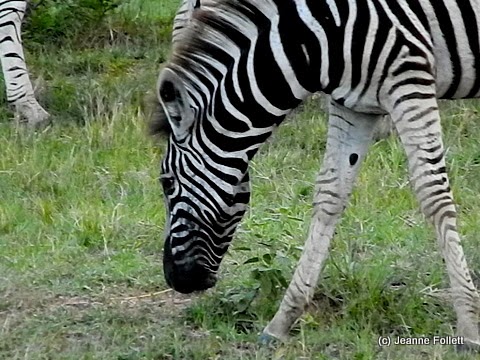 I think I'm getting some frame of reference for size, until we stop beside a giraffe that's on the other side of a tree from us.  My camera is set on "continuous," and takes four photos every time I push the shutter button.

The giraffe raises it head from a delicious tree top, almost out of the camera’s frame.  Perfect, I think.    This epitomizes the gorgeous giraffe. 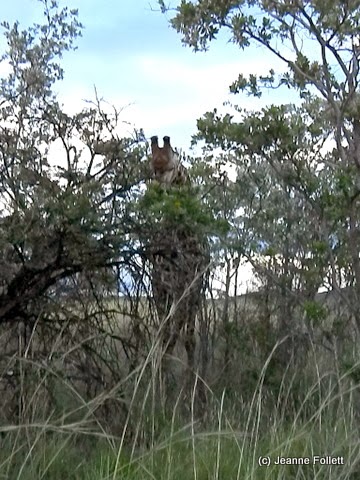 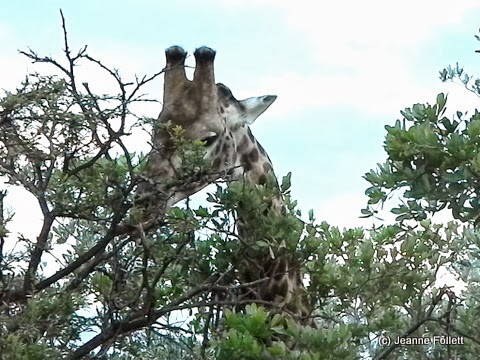 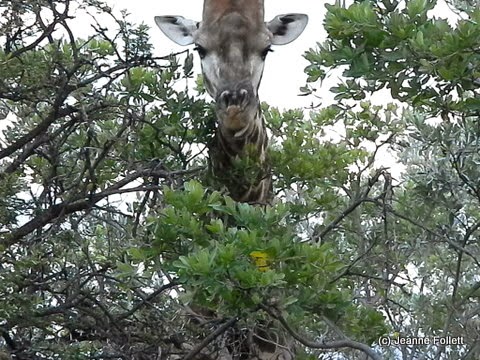 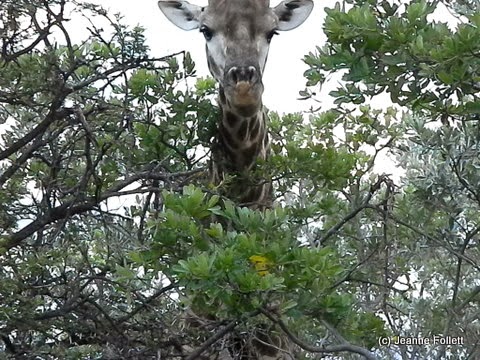 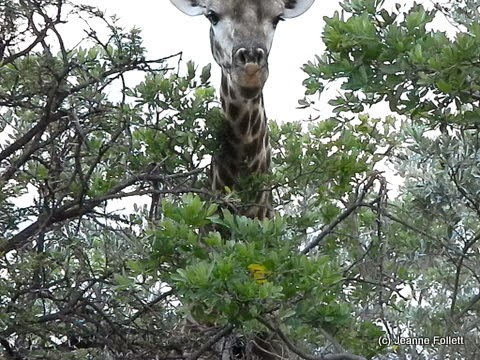 I have a lot more to learn about the scale of things here in the bushveld.

Sam slips the Land Rover into gear, and the safari continues…