The Africa Journals, Ch. 20, In the Company of Elephants

Chapter 20
In The Company of Elephants

If elephants didn't exist, you couldn't invent one. They belong to a small group of living things so unlikely they challenge credulity and common sense. - Lyall Watson

Dawn brushes the African sky with a palette of golden hues as we venture into the bushveld of Mabula Reserve.  A hard rain during the night washed away the old spoor of animals and left a clean canvas for the guides to interpret. There’s wistfulness this morning as it is our last safari at Mabula.  Later this morning, our suitcases will be placed outside our doors for the porters to fetch and our coach will take us south to Johannesburg.  There, six others who did not opt for this pre-extension, will join us for the basic trip. 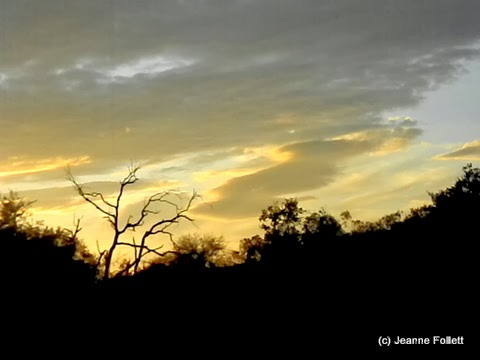 The safari vehicle radios are active this early morn as the guides report to each other what they’re seeing.

We pass leopard and hyena tracks, and come upon fresh elephant dung on the roads.  Francis stops at a pile of dung and inserts a finger into it as if testing it for warmth.  Then he puts his finger in his mouth.  He turns to us with a expectant face. 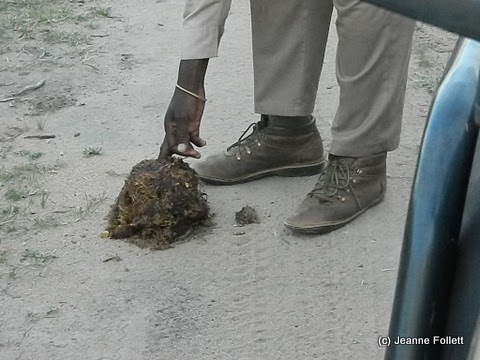 We’d been clued in by Brian.  Francis used his middle finger to touch the dung, but his index finger is the one that went into his mouth.  Nonetheless, Francis enjoys the prank as much as we do.  And i didn't have the camera ready.

Reports of the elephants moving in a certain direction come over the radio.  Downed trees block our way on a back trail, usually certain signs that elephants have been here, but these trees could also be windfall from last night’s storm. 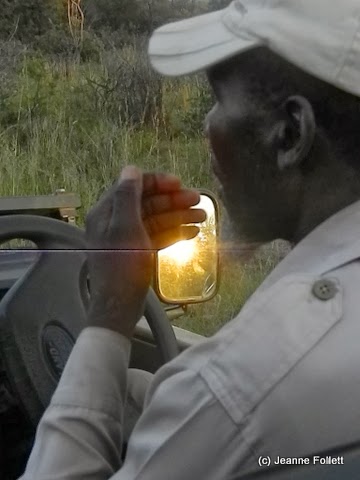 The guides are working hard to find the herd, but our hopes are dimmed by the knowledge that the morning is cool and the beasts tend to group up in thick trees for warmth.

We pass herds of impala, eland, gnu, and solitary warthogs.  We spook a warthog that had spent the night in a hole excavated by an aardvark.  Backwards.  They move in backwards, their heads and those vicious tusks ready for defense.

Warthogs are able to dig their own burrows but they much prefer the ready-made ones.


On we go, with Francis and Brian (and everyone in the safari vehicle) watching for tracks and signs of a herd of large pachyderms on the move.  There are lots of tracks. 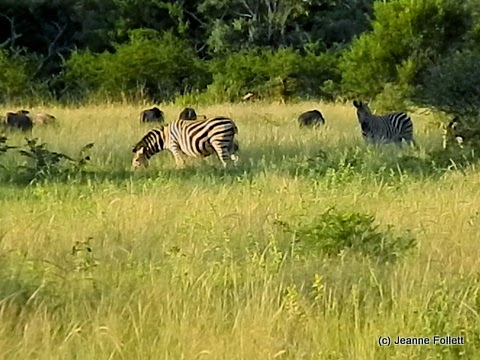 We spot a secretary bird in the grass, so named because its upper white feathers resemble a clerk’s morning coat, and the feather spikes that evoke quill pens stuck in a clerk’s hair or behind the ear.   As tall as four feet, secretary birds are deadly snake hunters and use their long legs and talons to stomp the reptiles to death.


Their legs are long like a stork’s, and are feathered halfway down, then protected from snakebites by thick scales.   Their heads resemble a hawk’s and they are classified as a bird of prey.

Again, I am struck by my lack of size perspective.  In the tall grass, the secretary birds appears to be goose-sized, not three or four feet tall. A video, played so the observer could count the number and accuracy of a secretary bird stomping a snake, revealed that the bird was remarkably accurate, always hitting the snake in the head, according to Brian, who tells corny jokes, but rarely exaggerates animal information.  Except about the warthog, but I’ll save that for another day. Our drive takes us to an area called “The erosion.”  It is bleakly beautiful. 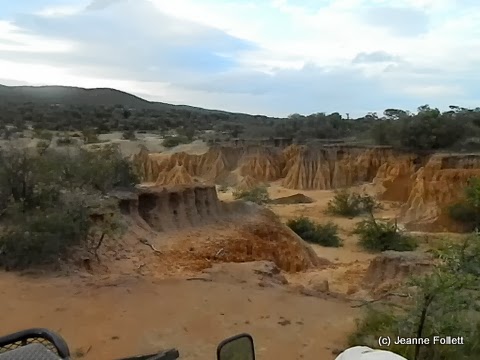 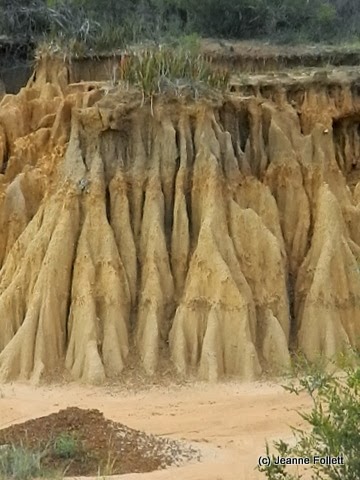 We circle around again, and suddenly… 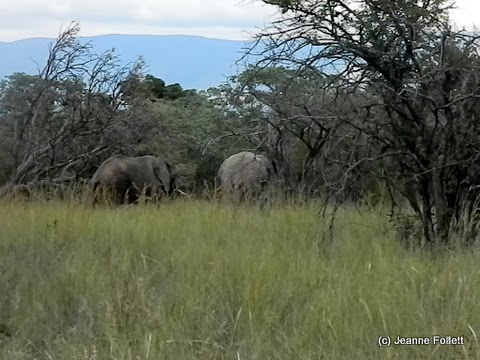 What a spectacular sight, these huge animals in natural surroundings, their incredibly dexterous trucks ripping clumps of grass from the ground or branches from trees. 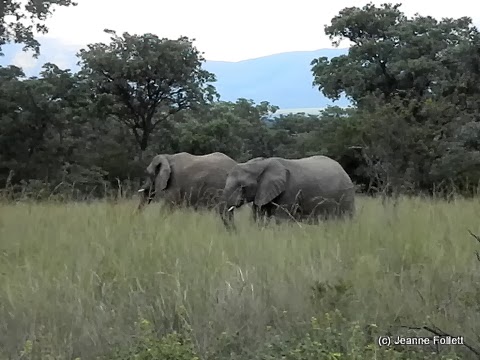 Their slow and fluid movements are mesmerizing and I can well imagine staying here all day, watching their adagio dance. 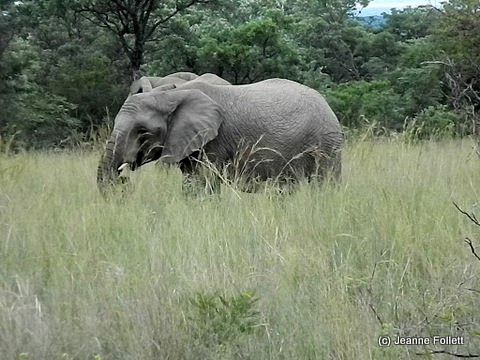 A large elephant approaches from the right, crosses in front of us, and walks behind bushes, now almost totally camouflaged. 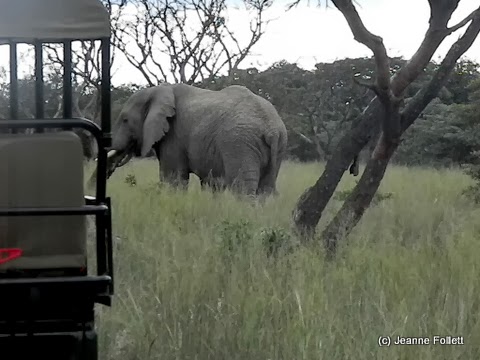 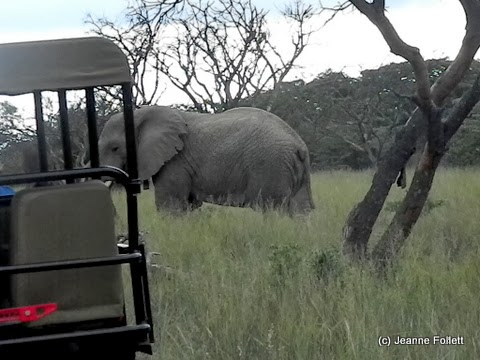 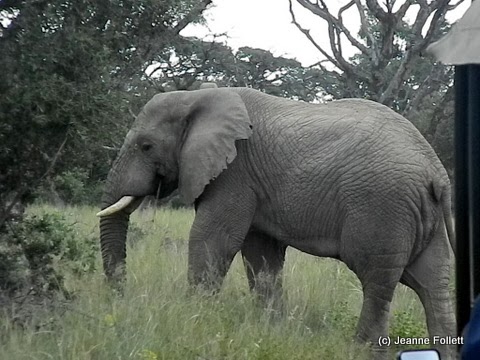 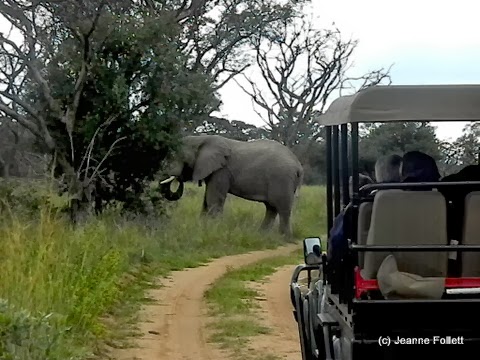 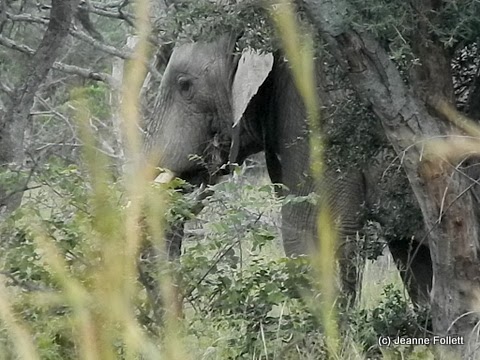 Another safari vehicle arrives for a view of these enormous animals, and we cede the way.  It’s time to return to Mabula Game Lodge for breakfast and last-minute packing.  At 11 A.M., we will board the coach and drive to Johannesburg. 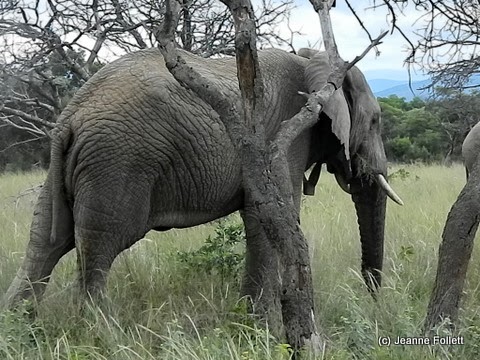 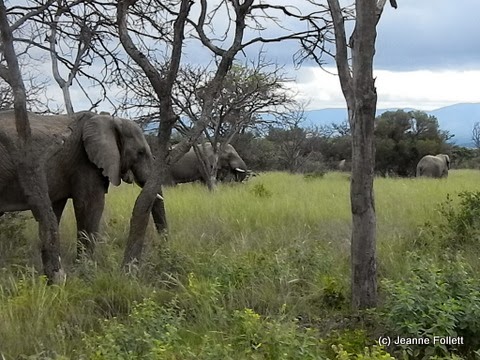 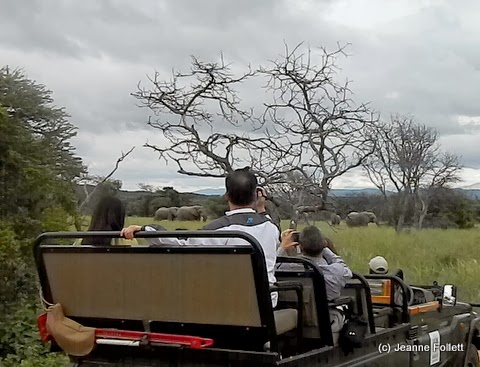 I am conflicted about leaving.

I know we have Chobe National Park in Botswana and Kruger National Park in South Africa to visit, but those are vast areas and Chobe is unfenced.   What are our chances of seeing wild animals there as opposed to in this relatively small reserve of 43 square miles?