The Africa Journals, Ch. 28, Piglets in the Mist

Chapter 28
Piglets in the Mist

The warthog is a hindgut digester, meaning most of its digestion occurs in the intestines and cecum.  Because it grazes close to the ground, it sometimes ingests foreign objects like pebbles and stones and flints.  When the warthog defecates, the stones can strike the flints and ignite methane gas in the dung, which then burns the hair off the warthog’s tail.   That is why the warthog has only a tuft of hair on its tail and why it runs with its tail sticking straight up.—Brian the Tour Guide   (Really.)

Suckered us in, he did, with that tail tale.
A soft rainy mist enfolds Chobe Safari Lodge as I sit on my balcony this afternoon.  Below me on the green lawn, four warthog piglets scuffle and play as their mother grazes on the short grass.   Warthogs will never win any beauty contests, hence their prominent place on the list of Africa’s Ugly Five, where it joins the wildebeest (gnu), vulture, Maribou stork, and hyena. 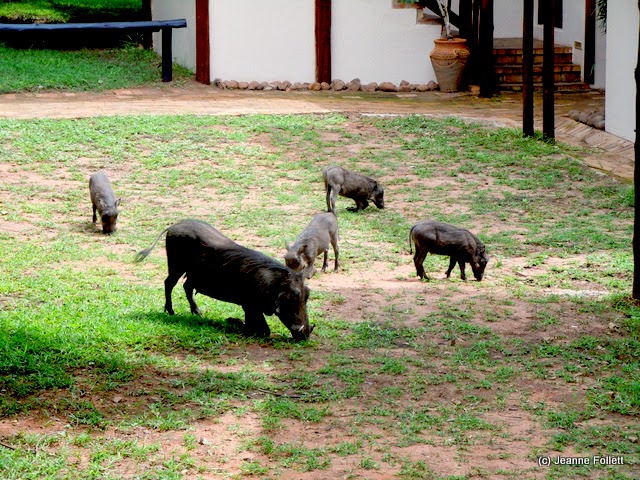 But the warthog, a member of the pig family, is indeed a hindgut digester and there is little hair on its body, just bristles here and there and a mane on its back.   And there is that tuft on its tail.  But the flint thing?   Don't think so.

I think the warthogs are kind of cute, despite how ugly they are.   They stand about 30 inches at the shoulder, are three to four feet long, and weigh anywhere from 120 to 250 lbs, with the males heavier than females.  They are omnivorous, eating mostly grass, berries, and roots, but also the occasional carrion they find. 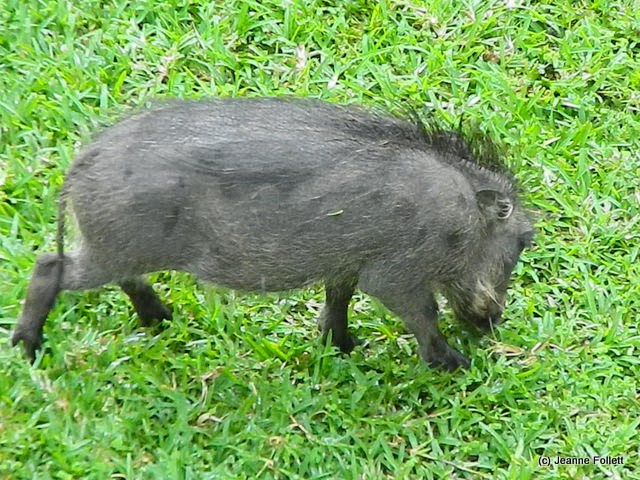 They have a keen sense of smell but poor eyesight.   Their eyes are far back on their head, enabling them to watch for predators as they kneel on their front legs and eat.   Calluses form on a warthog piglet's front legs even before it is born. 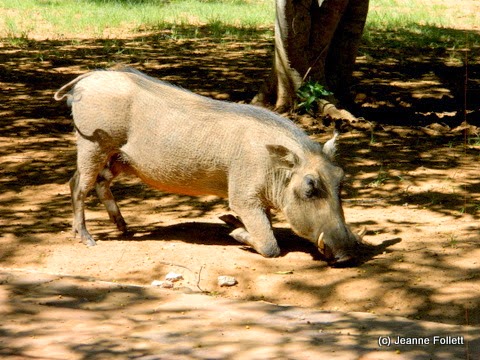 What’s remarkable about them is that they can go several months without water, particularly valuable in a land that has frequent droughts, and can tolerate a higher body temperature than normal. 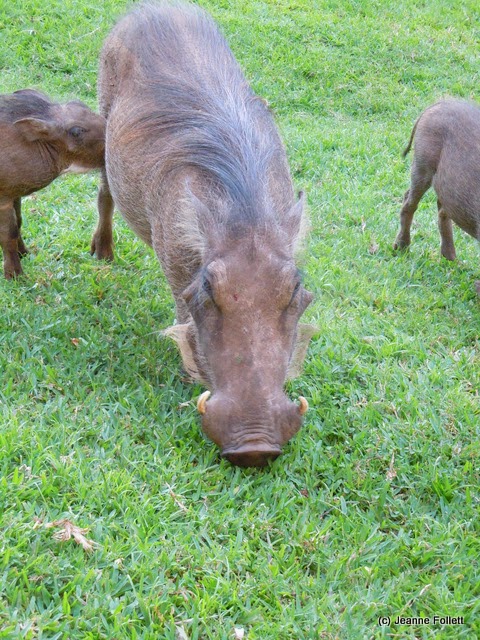 They are also all over the place, especially where people plant those nice green lawns that taste so good and where the soil is easy to dig, which must please the lawn-owners no end.   Warthogs, so-called because of two protuberances near the eyes and, on males, near their tusks, den up at night in holes dug by ardvarks.  They back in, ready to defend themselves with their tusks or run, which is their usual form of protection.   They can run as fast as 30 mph, or faster depending on what’s after them. 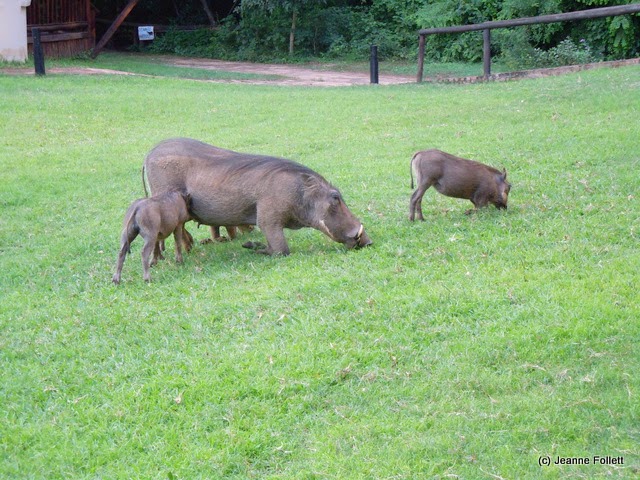 We had seen one explode from an aardvark hole at Mabula reserve, too fast to get photos.

Those warts, Brian says, are useful when the animal lies down as the tusks would otherwise hold the snout end of the skull off the ground in an awkward manner.  The warts enable the skull to lie in a relatively flat position.

I watch the piglets play for a while, pushing each other with their snouts in mock fights, digging holes in the lawns, and attacking the sow to nurse.

Then two lie down beside each other to nap, but the other two won’t allow any sleeping and hassle them. 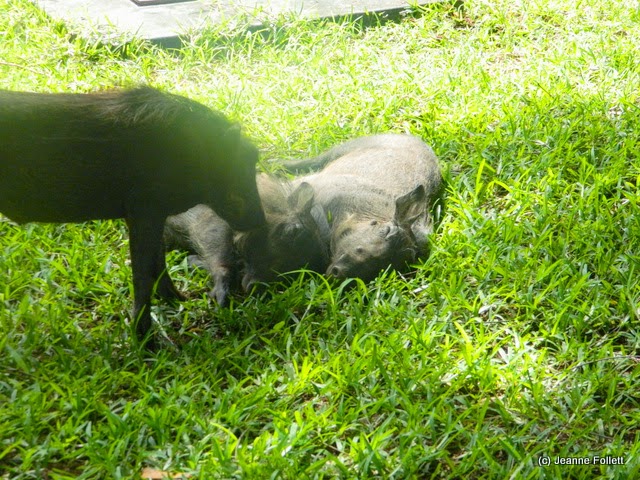 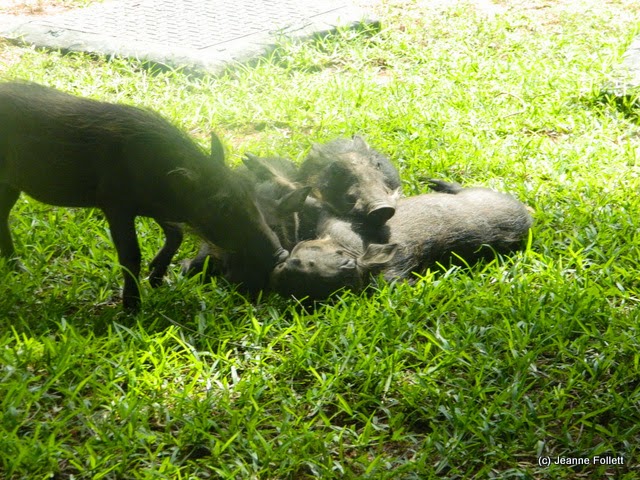 Then, it’s time to meet the others for our afternoon safari into Chobe National Park.  At the bottom of the stairs, I see some banded mongoose scampering around and stop to watch them digging in the hole the warthogs had been enlarging, as well as under the foundations of buildings. 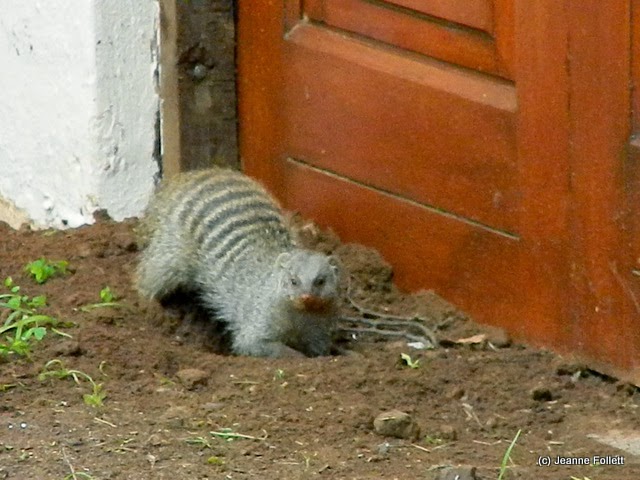 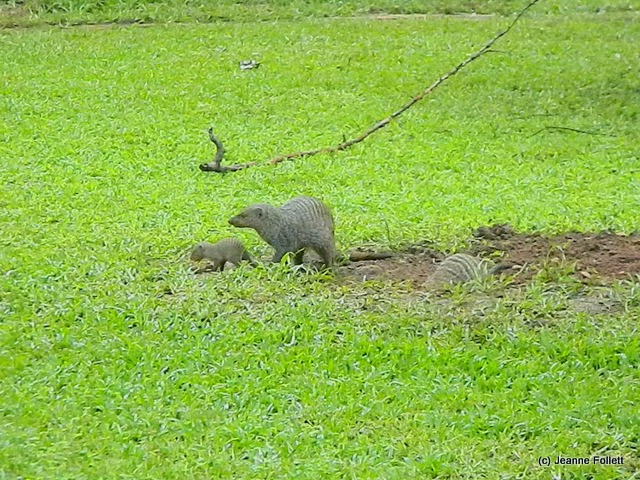 They are 12 to 16 inches long and weigh between 3.5 and 5 lbs.   After pups emerge from the den, they will seek out a “helper” or “escort” that will feed them until they are able to forage for beetle, grasshoppers, etc., and small vertebrates.   The pup receives it food exclusively from its escort. 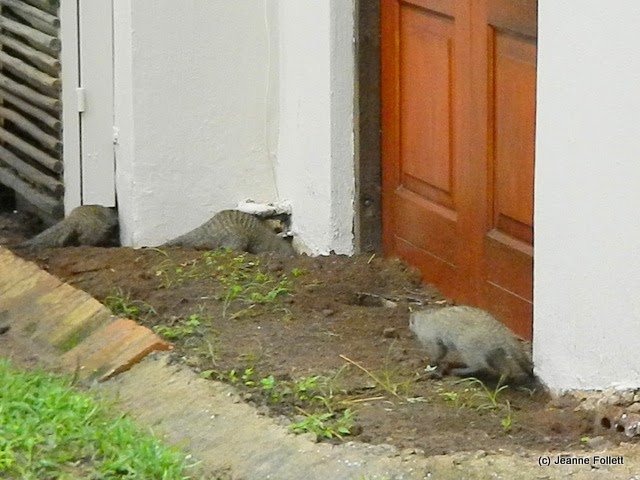 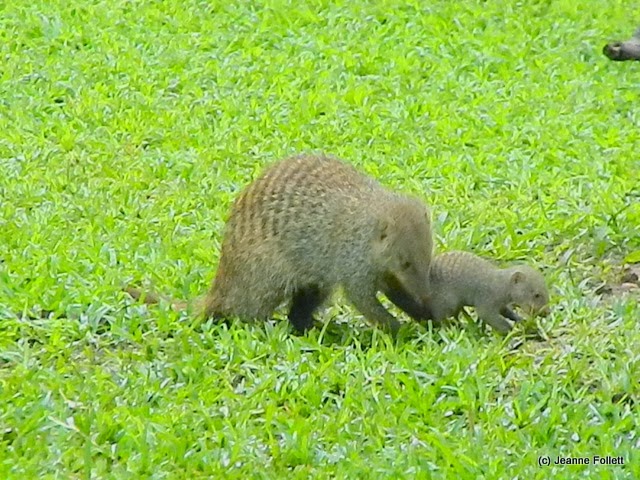 Time to go.  I’m still gobsmacked from our cruise on the Chobe River yesterday and can’t imagine anything that can top that.