The Africa Journals, Ch. 16, Who Knew the Gnu was Blue?

Chapter 16
Who knew the gnu was blue?

Though we travel the world over to find the beautiful, we must carry it with us, or we find it not.”
― Ralph Waldo Emerson, Emerson's Essays

We go right into the dining room for breakfast upon our return from the morning safari.   Though it is buffet, you can have eggs cooked to order and there is a menu from which you can order other egg dishes. 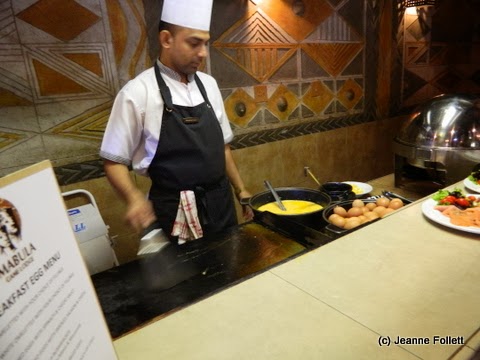 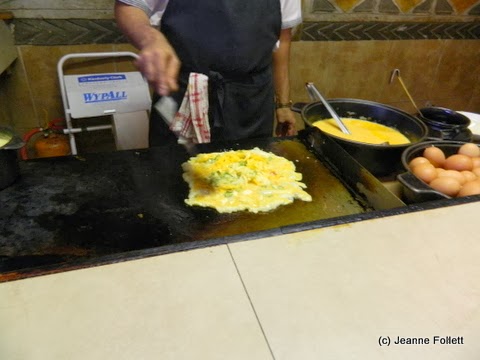 I'm being adventurous and order an item called Mabula Bushwhacker, the most exotic-sounding item on the menu.  It's a poached egg with Kudu mince and what I think is a Hollandaise sauce.  The whole thing is quite good.  “Kudu mince” turns out to be ground Kudu meat. 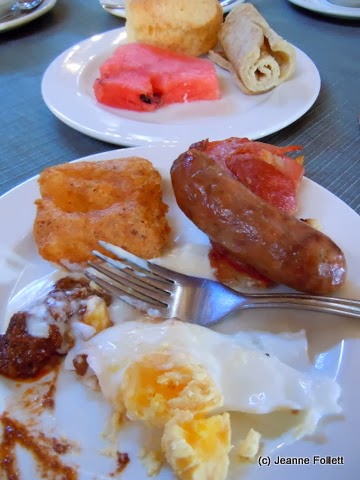 I add a beef sausage and a small piece of ham (just in case), some mystery food, watermelon, a scone, and a tiny rolled-up pancake.   Then it'ssoff to my room to try to make sense of my suitcase, and download and label photos before I forget what was what.  The warthogs were on the lawns and I stop to watch them watching them walking about on their knees, which make's mine ache. 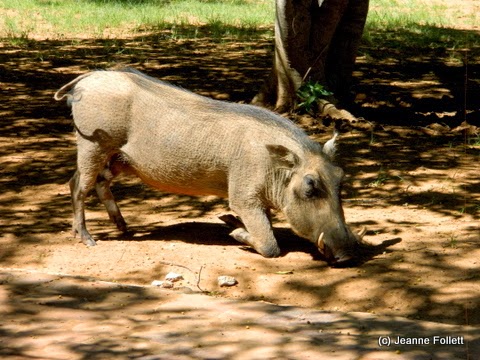 Our next safari is at 4, but in the meantime, there's lunch, and new culinary experiences.


At 4 o’clock, we are off.  We haven’t gone too far before Francis brakes.   We all look around, seeing nothing.  He gets out, leans over to pull a long piece of grass from a tussock, then turns back to us with a chameleon on the grass. 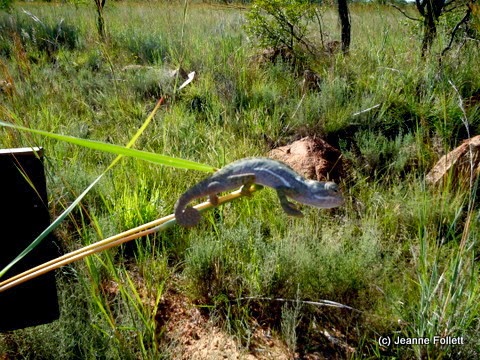 He must have seen it while watching the dirt for animal tracks, but it is nonetheless a remarkable sighting.

Then, because I had eaten Kudu for breakfast and lunch, a female Kudu steps out of the brush.  I gulped. 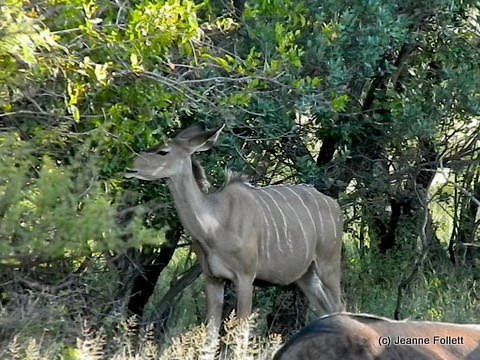 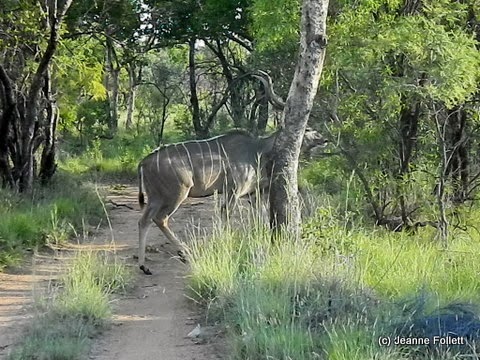 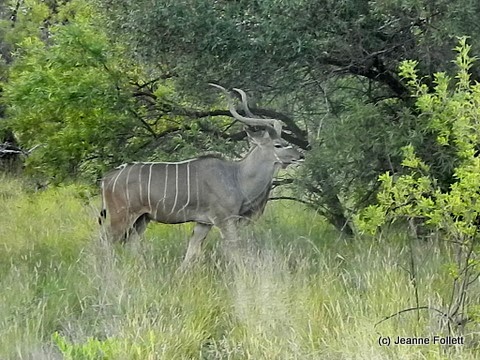 On we travele on the red roads of Mabula Game Reserve.   Two rhinos appear in the tall grass. 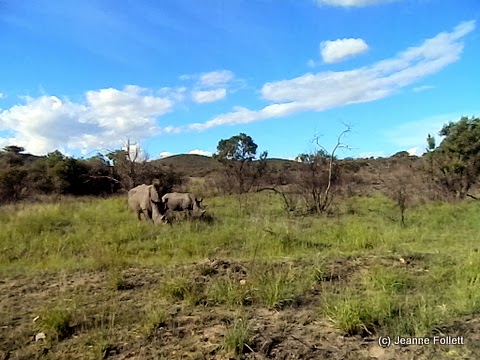 A European roller lands in a tree and holds still long enough to get a photo. 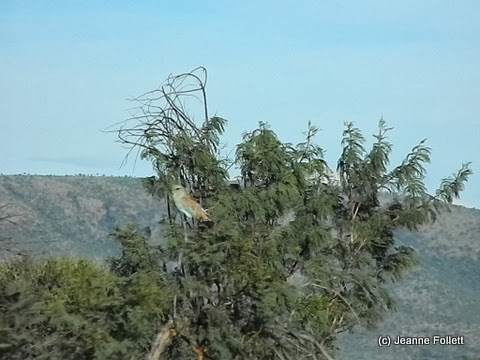 We pass the Hippo pond and watch mama and baby for a while, then spot a Red Hartebeest in the shade. 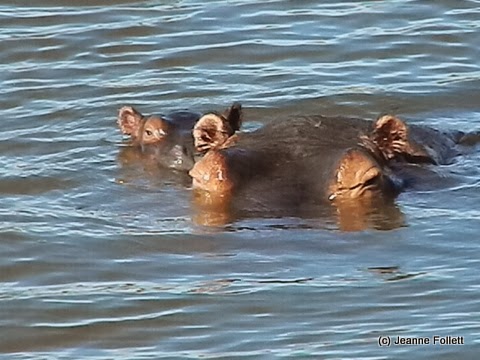 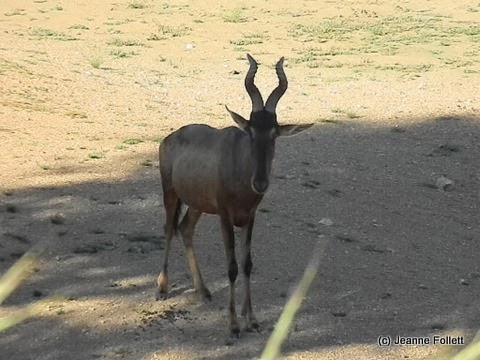 Brain is constantly watching for animals and birds, when not picking up all the stuff I drop on the safari vehicle's floor, and spots a jackal in the brush, traveling the same direction we are going.   We stop as it comes closer to the road.  It is obviously stalking something. 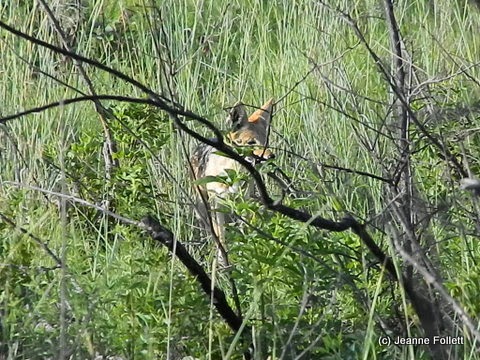 That “something” explodes in a frenzy of Guineafowl, most of which fly into a nearby tree.  But for one. 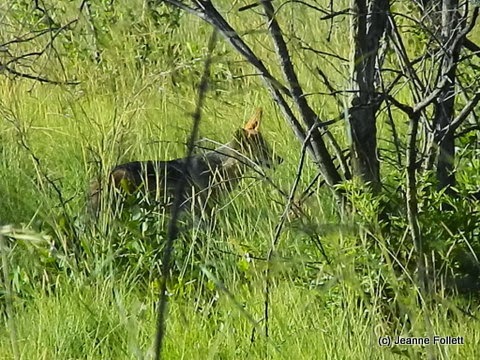 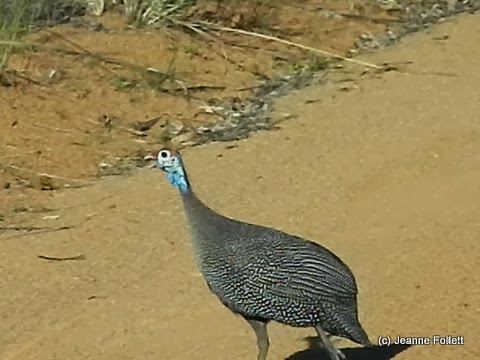 This bird is either confused or thinks it can take on the jackal by itself, as it runs towards the predator.   I think our arrival on the scene saves the idiot fowl, but the jackal goes hungry.

We circle back to the pond.   The Red Hartebeest is still in that lone patch of shade, but the colors behind it are superb. 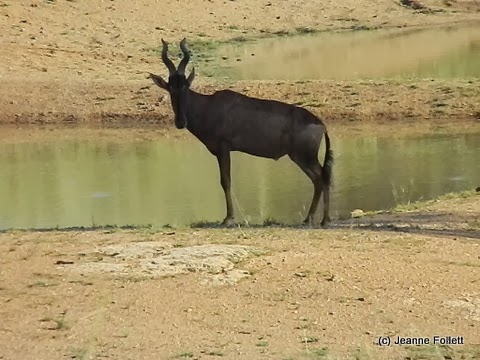 And then, just to add to the load on my carnivore's conscience, a Kudu and some Wildebeest stand beside the road.  Brian identifies them as Blue Wildebeest and something clicks in my brain.  I'm
thinking about the BBQ Gnu meatball I had for lunch. 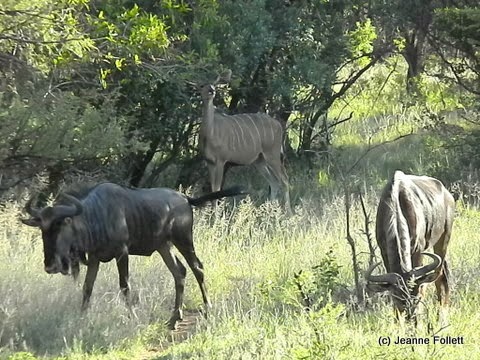 “Once in a Blue Gnu,” he says, taking the line right out of my mouth.   How many times has he had to endure that?

By this time, the long rays of a waning sun tint everything gold and an enormous rhino appeares on our right.   There are several in the “crash,” the most appropriate collective noun I’ve ever heard. 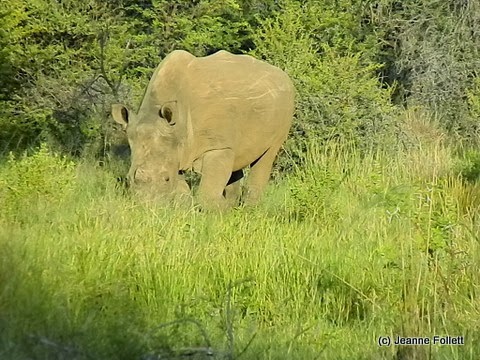 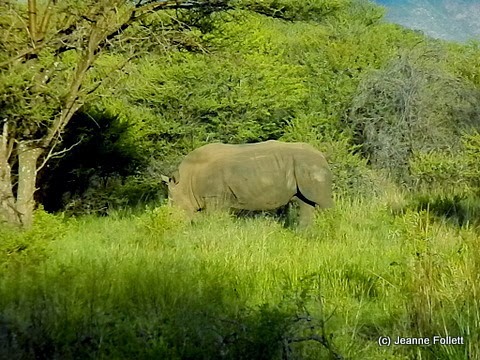 They look as large as boxcars, even though they were a ways off from us.

Francis pulls over for our sundowner stop and I go wandering.  I spot some holes in the ground and watch as an ant disappears into one.   They don’t look like ant holes, so I call Brian over. 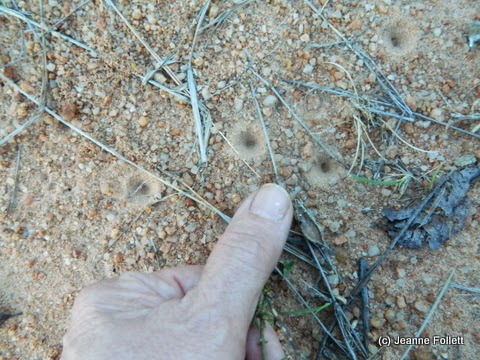 Antlion, he says, one of the Small Five, along with Leopard Tortoise, Rhinoceros Beetle, Elephant Shrew, and Buffalo Weaver.

The ant did disappear, eaten by the larva that created the hole.   In North America, the antlion is called a doodlebug.

Then it's back to the lodge, where we will dine in the outdoor Boma*.   In the dark.   Very, very dark. 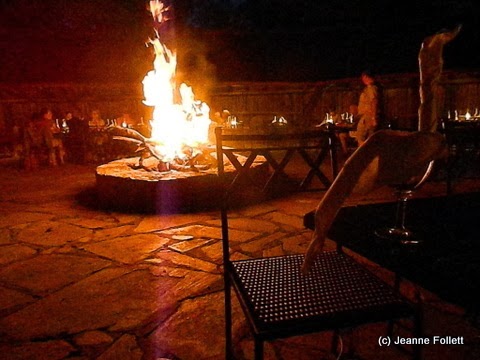 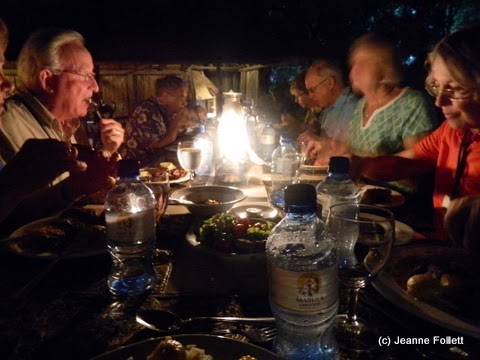 *  "Boma" can mean many things, but it is usually an enclosure built from native material to afford protection.
Posted by Gullible at 11:42 AM