There are as many worlds as there are kinds of days, and as an opal changes its colors and its fire to match the nature of a day, so do I.” ― John Steinbeck


The hippopotamus was thirsty.  It went to the river, hoping to drink and cool itself in the water.   The crocodiles that lived in the river told the hippo to go away.

I need to drink, said the hippo.   I need to wade in the water and take some of the great weight of my body off my legs.

No, said the crocodiles.  You will eat us.   We’re afraid of you.

I won’t eat you, replied the hippo.   I eat grass.

We don’t believe you, answered the crocodiles.

I will prove it to you.   Every five minutes, I will open my mouth wide and you can see for yourself.

And so the hippos and crocodiles lived together in the river, and that’s why hippos frequently open their mouths wide.—African legend as told by a Zulu guide

Sam parks the Land Rover on the bank of a large pond.  The surface of the water is marbled with hippo eyes and hippo ears and whatever other hippo bumps stick up above the water. 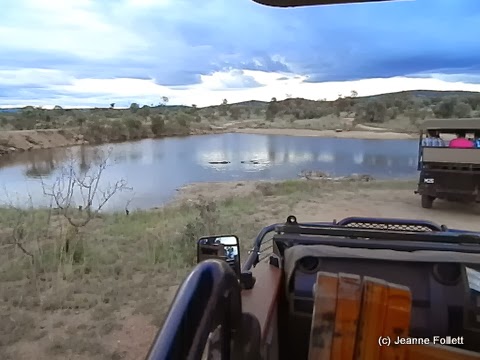 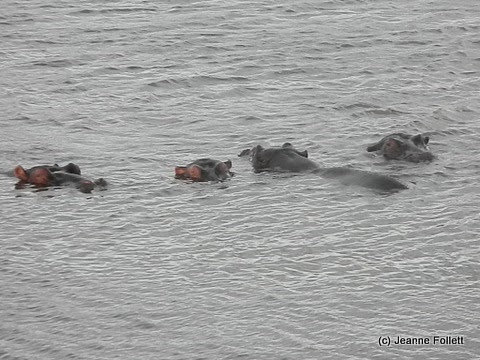 Far across the pond, a hippo opens its mouth wide.

Nearer to us, another hippo opens its mouth.   Sure enough, neither is chewing on a crocodile.

They do, however, appear desperately in need of an orthodontist.  Hippos have a lot of teeth—up to 40 if some of their milk teeth are still present, but your eyes stop at those massive ivory canines and razor-sharp incisors.

You just don’t want to get close enough to count those teeth because those monstrous incisors and canines can cut you in half. 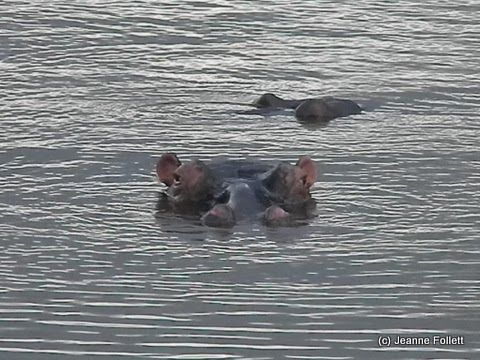 Here’s another reason to stay away from hippos:  when they defecate, their tails switch back and forth rapidly, thus dispersing their dung in a wide area.

Along with the Cape Buffalo, hippos are bad-tempered when defending their young, their territory, or just for the plain orneriness of it.  Some sources claim hippos kill around 3000 people a year, often attacking boats for no apparent reason. 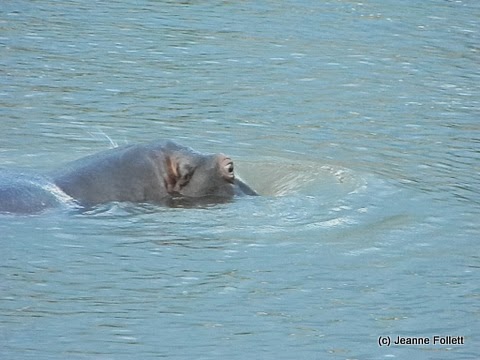 You can’t outrun a hippo.  They’ve been clocked at 19 mph.   Fortunately, they spend most of the day, some 16 hours, in water to keep their massive bodies cool, coming out in the evening to graze on grasses.   They are also fast and graceful in the water, bounding along with the aid of buoyancy by just tapping their feet on the bottom to propel themselves.  On land, they often appear cumbersome, and they cannot jump even small ditches.

They exude a reddish liquid, making them appear to be bleeding, but it acts like sunscreen to protect their skin from drying and cracking.


Though their form brings pigs to mind, the hippos’s closest living relatives, according to DNA testing, are cetaceans—whales, porpoises, etc.

As with many animals, hippos are losing habitat.   They are hunted for their meat—and for those 20-inch long, ivory canine teeth.    George Washington's false teeth were carved from hippo ivory, rather than wood as commonly believed, according to one source.

Though the crocodiles may have extracted a non-aggression agreement from the hippos, the hippos neglected to gain the same promise and crocodiles have been filmed attacking young hippos.