Apparently, it’s my purpose on this trip to keep Brian amused.  I’d been trying to mend my self-image of a klutz, especially after I realized how many times poor Brian had bent over to retrieve whatever I’d dropped on the floor of the safari vehicles.

We stop at the highway rest stop on the way back to Johannesburg.  I reboard the coach and realize I have an empty Coke Zero bottle to dispose of.   I look around and see a trash can about 20 yards away, so I get off the coach and get rid of the bottle.

Brian is chuckling when I finally get on.   “It’s on the other side,” he offers.  And then!  One of the passengers points out the rubbish can right beside the coach.   This tickles Brian no end.


Six hours after being back in Johannesburg, and I still haven’t gotten myself into some kind of jam.  I successfully negotiate a visit to the attached mall, and explore several floors, all without getting lost, finding myself stuck in an elevator ( I took the escalators), or otherwise giving Brian cause for concern.  Or mirth.

He, Brian, was off to the airport to pick up six more travelers, so we have the afternoon and evening free.  I order a pastrami sandwich (incredibly the smallest-sounding item on the menu) in one of the very busy restaurants in the mall.  When I start to pay the bill, though, I go brain dead trying to figure a 10 or 20 per cent tip on the $86 rand bill, which I am charging to my credit card.  I can figure it in dollars, but not in rands.

Three men from our group are at a nearby table, so I approach them and ask for help.  It must have been my unexpected question, but the same malady seizes them.  Finally, one has a solution:   Give the server 100 rand in cash.   "But that's ten dollars!"  I exclaim.  We all do the mental math and settle on 10 rand, which is around a dollar.  Ten per cent is the tipping norm in South Africa.

No 5 A.M. wake-up call for safari the next morning.  Instead, we sleep in until the civilized hour of 7 o’clock, for an 8:30 departure to Pretoria, the capital of South Africa.

“Today,” says Brian once we are on the coach and headed out of Johannesburg (hereinafter referred to as Joburg), “we will visit two towns.  One is Euro-centric and the other is Afro-centric.” 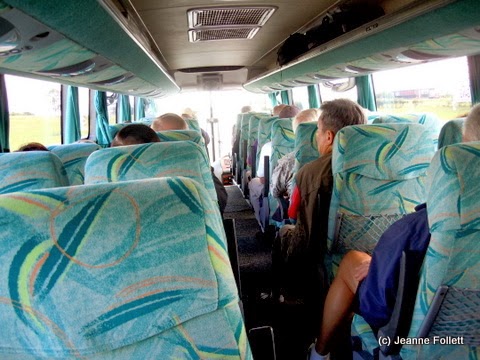 But first, a short 20-minute stop at a nearby mall for those who need to purchase necessary items they may have forgotten.  I wander, purchase some nuts in a small shop, and find a restroom.  Then I return to the coach.  Brian asks if we are ready and looks specifically at me.  I couldn’t help myself; the devil made me do it.


“I was trapped in the restroom stall,” I said.   Brian laughs and shakes his head.  Well, I was.  The knob had to be turned to extremes to release the latch and it took a bit to discover that.  I'd been hoping Brian had a better opinion of me than that of a doofus he had to watch every moment, but I think I just reinforced it.   I had at least stopped dropping my water bottles and pens and notebook in safari vehicles—all of which he picked up for me. 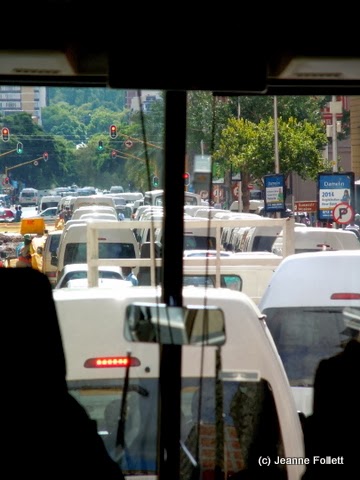 We drive through the wide streets in downtown Pretoria, their width based on the radius of a turning oxcart.  There are tens of thousands of jacaranda trees in Pretoria which set the city ablaze with purple blooms in October and November, but not now, not in February.


We pass the home of Paul Kruger, renowned as the face of resistance to the British annexation of the Transvaal.  He was elected president of the Transvaal several times, and tried to keep the Boer lands free of British rule.   Unfortunately for the Dutch Boers, gold was discovered in their lands and that, after the Boer Wars, was the end of independence from Britain.

Kruger National Park is named after him, as is the Krugerrand coin.


Unquestionably, the strongest influence on South African culture and politics was the Dutch reformed church, which taught a severe Calvinist ethos, including apartheid and stratification of people according to race.   The church forbade business dealings on Sunday so all businesses were closed on that day.


As a result, said Brian, people were advised to not go skydiving on Sundays because nothing would open, not even parachutes.  (The jokes got worse as the trip went on   This one was actually one of the best.)) 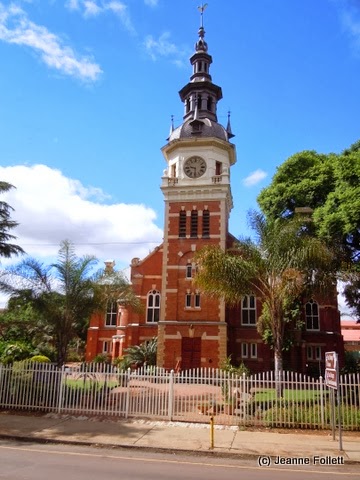 We pass pedestrians looking for cabs and making particular hand signals to indicate their destination (local, out of city).  The cabs honked when they were available.

Brian warns us against using the minivan taxis as their drivers believe the laws were for others, not them.   Driving on sidewalks, wrong way on one-way streets, nothing stands in their way.

One of the most popular minivans used as taxis is the Toyota HiAce, which has been interpreted by wags to mean “High Impact African Culling Equipment,” according to Brian.

We go to see the parliament house, known as the Union Buildings, built on the highest point overlooking this modern city.  The semi-circular building is composed of two wings joined at the middle, representing the union of a once-divided country. 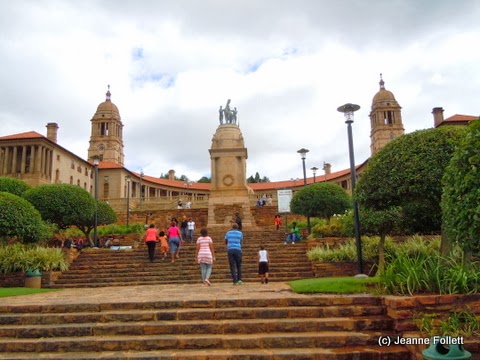 In front of the building is a bronze statue of Nelson Mandela, nine meters high, with his arms out-stretched, symbolic of embracing the nation as a whole.  Erected following his death late last year, it is situated where Mandela made his inaugural speech after being installed as president of the country. 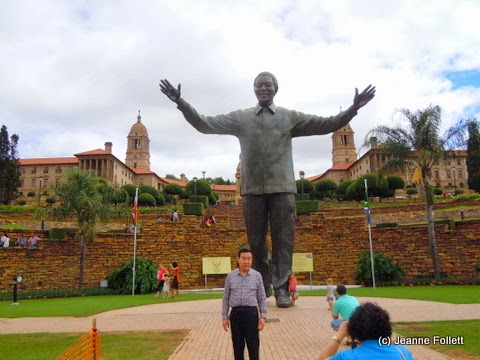 Around and below the statue are exquisitely tiered gardens containing only native plants. 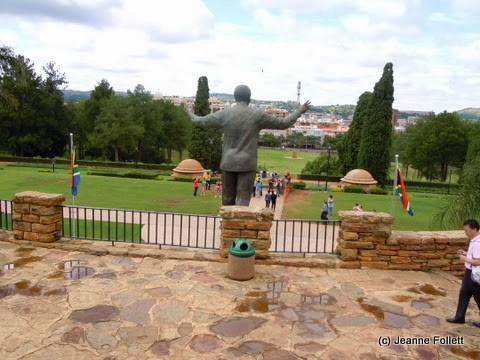 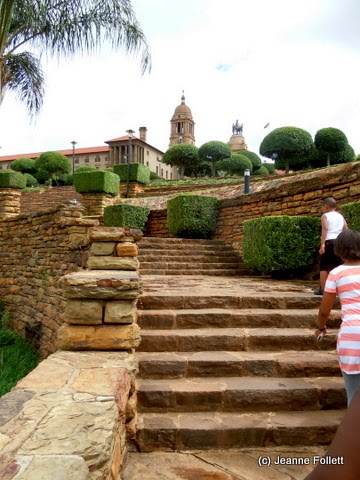 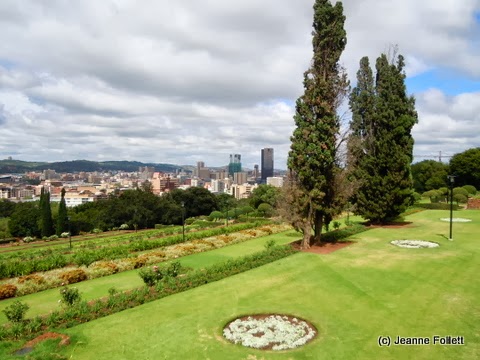 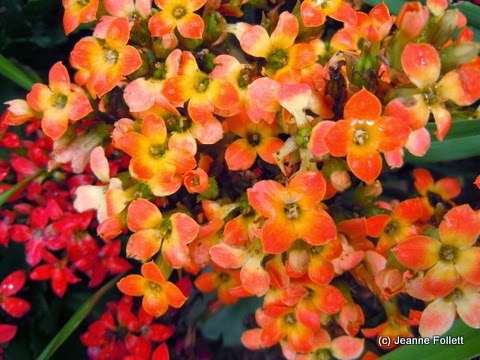 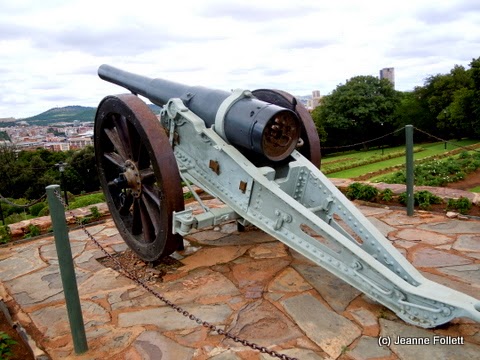 I had heard something before I left Alaska on this trip.  Apparently a statue of Mandela was creating quite a fuss because the sculptors had violated a ‘no signature” provision.  They had placed a small rabbit sculpture in Mandela’s ear, in lieu of signing their work.

I ask Brian.  He thinks that statue is elsewhere.   I look and don’t see anything in Mandela’s ear canal. 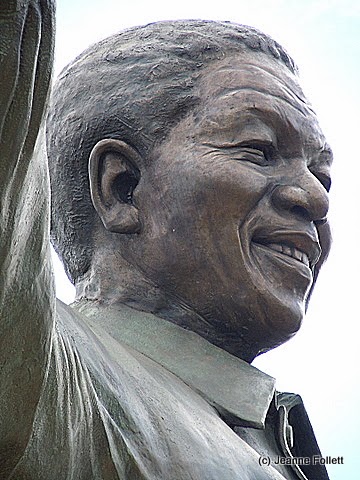 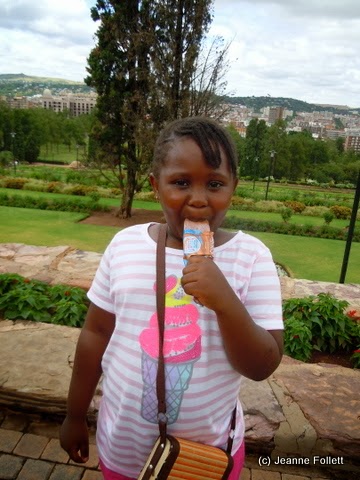 South Africa’s history is tortured and convoluted.   Its record in dealing with the indigenous peoples is a nightmare.

The coach turns toward Soweto, where many of those nightmares occurred in real life.  It is also the place where ordinary men became extraordinary. 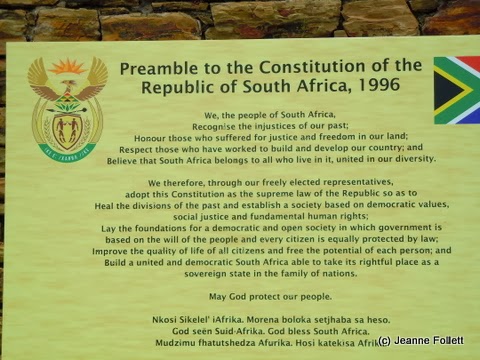 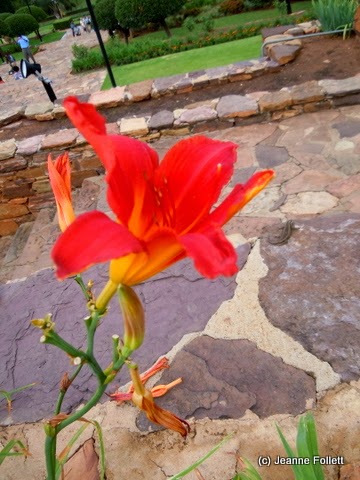 *Marching to Pretoria, sung by every kid who ever was a Scout or who attended summer camp and wondered where the heck Pretoria was and why they were marching there, is of disputed origin.  Various sources claim it was sung by the Dutch Boers when they left Cape Town and trekked to the interior of southern Africa (Pretoria) to escape British rule.   Others claim it to be a marching song sung by British soldiers as they advanced on the Boers during the 2nd Boer War, more specifically by troops under the command of Lord Robert Baden-Powell, who is considered the father of the Scouting movement.   Whatever its origin, it is a song about relying on your fellow marchers.
Posted by Gullible at 2:09 PM