The Africa Journals, Ch. 9, Culture Clash in a Grocery Store

One’s destination is never a place, but a new way of seeing things. – Henry Miller

Anxious to exchange large rands to small rands, I headed into the grocery store again and picked up a Magnum pomegranate ice cream bar, a new taste experience for me.   Then I joined the queue for the cashiers.  With a couple people ahead of me, I had time to look around and…uh, oh.

I’d been in here less than a half hour before and bought a bottle of Coke Zero for the long coach journey we were to make later this morning.   As in US banks, customers formed one line, then went to the cashier that looked almost done with her current customer.   When I did that, the cashier shot me an annoyed look.  She also refused to exchange my rands for smaller rands, just gave me change for my purchase.

What I had failed to notice, because there was no one ahead of me to show the way, was that each cashier (they are seated in chairs and are called tellers) would push a button to indicate that she was ready for the next customer, then a sign lit up indicating which teller was ready.  My barging in to her space was discourteous and I had deserved that look.

This time I waited.  I also acquired a few more small bills in change.  I could game this system.

I considered returning to the earlier teller and tendering my ignorance as an apology but she was busy with a customer and I didn’t want to barge in again.

Back in the hotel lobby, I told Brian of my misadventure in the stairwell, the broken glass, and the door that wouldn’t open.  A look I have yet to interpret (but would see often) flashed across his face, quickly replaced by concern.

"This is a safety issue,” he said.  “I’ll have to tell management.” He was thinking about fire and guests trapped in that stairwell, just as I had.

I also had a little problem at the bank, I explained.   Same look, but closer to, “Oh, boy, there’s one in every group…”

I retreated to a neutral corner.  What’s the matter with me?  I’m an experienced international traveler, yet I’m acting like a doofus.   Forgetting to check for my yellow fever card, forgetting my Vantage name tag and cobbling together a poor substitute, getting myself trapped in a stairwell, the problems at the bank and grocery store.   Is this what it meant to “act your age?”   If so, I didn’t like it.

Fortunately, I am one who believes “Blessed are we who can laugh at ourselves, for we shall never cease to be amused.”  Well, the grocery store thing had me chagrined, but I was laughing at the rest of my misadventures.

I reached into a small pocket of my super deluxe travel vest with all its secret pockets.  As my hand closed around its contents, a smile reached my face.   Not all doofus, I thought, as I withdrew the “forgotten” Vantage name tag with its appropriate blue lanyard. 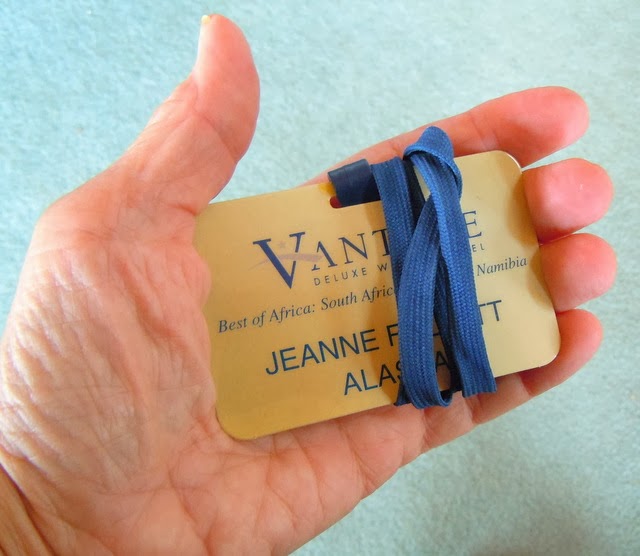 And then we boarded the coach for a trip into Africa.