The Africa Journals, Ch. 14, Take Two Rhinos and Call Me in the Morning

Chapter 14
Take two Rhinos
and call me in the morning

The Wanderlust has got me... by the belly-aching fire
― Robert W. Service, Rhymes of a Rolling Stone


The sun is slipping towards the horizon.  Time for the day-livers to find those last bites of sustenance; time for night-dwellers to rise from their rest.  We stop and watch some beautiful oryx, known in Afrikaans as gemsbok, with their long, rapier-like horns. 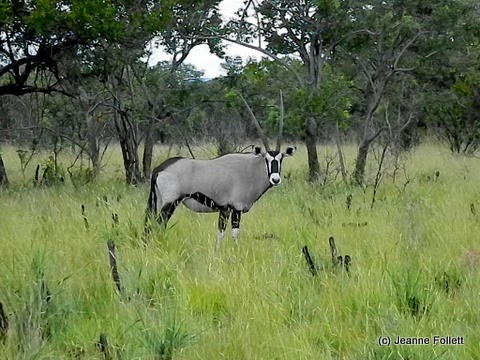 Male oryx weigh more than 450 lbs, and stand about four feet at the shoulder.  Females have the same height, but weigh somewhat less.   In some cultures, the horns are sought after for charms, and were sold as unicorn horns in Medieval Europe.   The horns are straight and ringed, and can reach 36 inches.

We start to leave and one oryx turns, providing the perfect pose to exhibit its unusual markings. 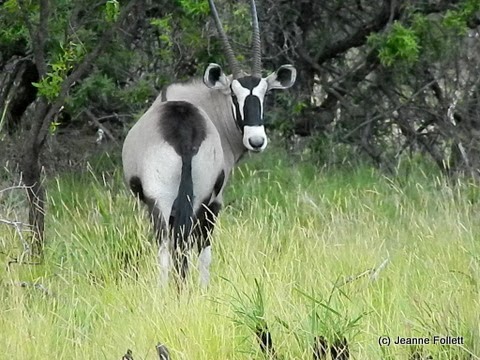 Sam turns onto yet another red trail in the Mabula bushveld.   A giraffe, which has been so elusive all evening, steps into the open and poses against the fading light. 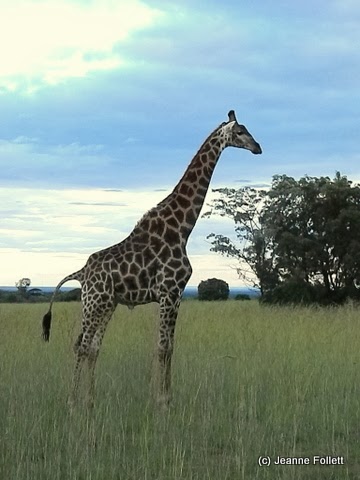 We drive on, and I see what I think is a snake in the grass alongside the road.  Sam backs up, but it’s gone.  “What color?” he asks.  “Green, light green.”

“Green mamba.”   He drives on.  There’s silence in the safari vehicle at the mention of such a venomous snake.

We see some Wildebeest beside the road, dark gray with vertical dark stripes. 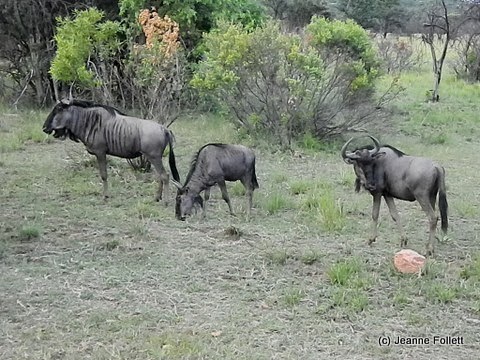 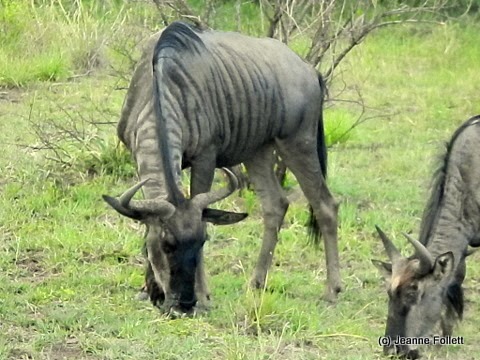 Another right turn.   And there they are.  Three white rhinos, and number three of the Big Five.  We saw the Cape Buffalo and the elephants earlier in this safari.  The designation “white” has nothing to do with the rhino’s color, rather it comes from the Afrikaans word wiet meaning “wide,” which describes the upper lip of the white rhino.   It is almost square as opposed to the black rhino’s triangular-shaped upper lip. 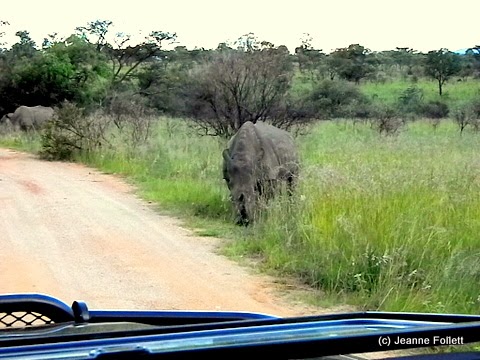 The white rhino is the largest of several species of rhinos, with males measuring 12 feet long and six feet at the shoulder.  While weighing between 3000 and 8000 lbs, the heaviest ever recorded was 9900 lbs. 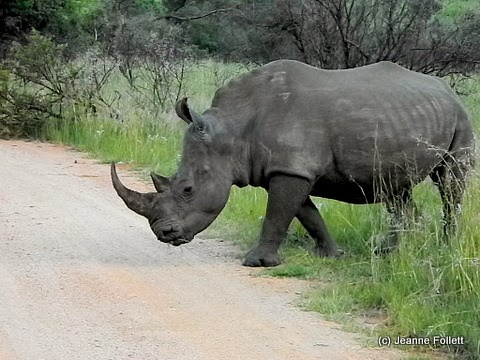 The white rhino carries its head low, while the black rhino carries its head more level with its upper body.  The two horns are made of keratin, like our fingernails, and unfortunately for the rhinos, are prized in Asian for various uses in traditional medicine, and in Yemen for dagger handles, where they are considered a status symbol. 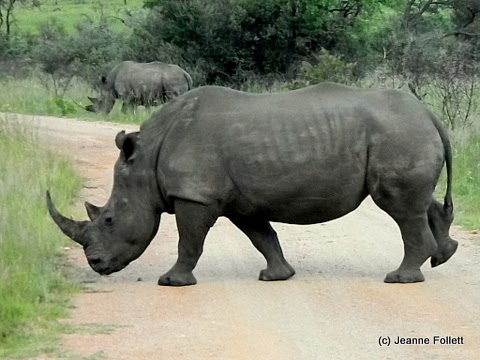 The largest rhino crosses the road in front of our vehicle, not caring in the least that we are there gawking and snapping photos.  Now we have a large rhino on one side and another with a juvenile on the other side, an interesting position in which to find oneself. 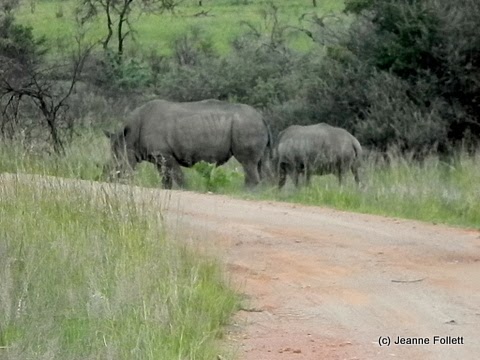 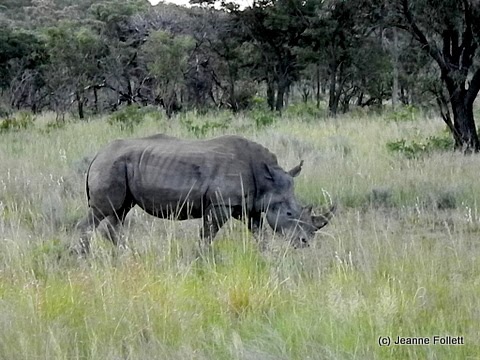 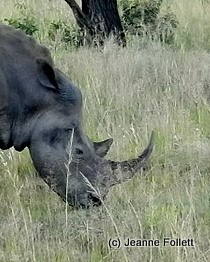 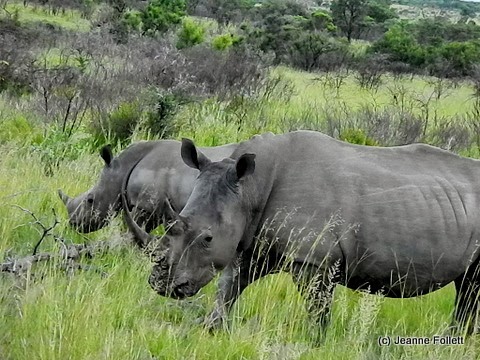 Sam drives a bit farther and parks the Land Rover.   He sets up a table and places some cold beers, water, and sodas on it as well as snacks like chips, nuts, and dried fruits on it.   We are allowed to get out and walk around the immediate area. 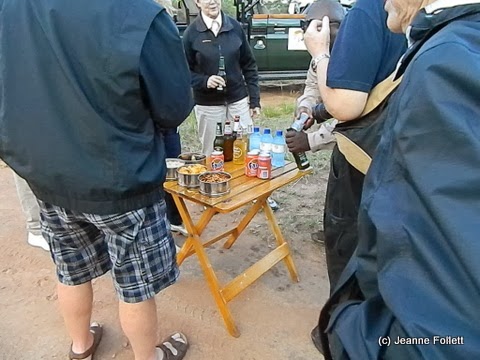 I grab a soda and wander, looking at tracks on the dirt.  Sam comes over (probably to keep me from going too far) and identifies the spoor.

Then he points to a hole in the bank alongside the road:  scorpion.   Egad, that is a huge hole and I’m picturing rat-sized scorpions.  I hurry back to the group having their sundowners.


We hear African music as the Land Rover stops and lets us off.   In the darkness, I see small antelope, and Brian identifies them as female Nyala and a tiny Klipspringer.


I tell him about the green mamba and he laughs.  “That lying bastard,” he says.  “There aren’t any mambas here, green or otherwise.   These guys are terrified of snakes and they think they’re all mambas.   It was probably a woodland snake.”  Guide Speak, I think, and smile.

We walk through the elephant tusk arch (made of plastic) and through a line of young, enthusiastic dancers.   They are there to welcome all the safari vehicles back from the bush.