(Note: I saved the best for last. Click on the photos to enlarge them to full screen. Then enjoy. There is another new post that follows this one--one I made late yesterday.)

This time during the break, the students go out of the building to talk. They crowd around Keone and ask what had happened in there.
“She was getting angry,” Keone says.
“Yeah, duh, we could tell that,” says another young man. “But why? I mean, were we doing something wrong?”
“No, no, at least, I don’t think so,” says Keone. “See, according to legend, Pele had an older sister named Na-maka-o-Kaha’i of the Sea, and there was some hanky-panky between Pele and the sister’s husband, and Pele had to flee. Every time Pele made a crater with her digging stick to hold fire, the sister deluged it with water.
“Pele had to keep on the run until finally she found Mauna Kea, the tallest mountain in the islands. She was safe there, because her sister’s seawater couldn’t reach that high.”
“Interesting, Keone, but what’s with her getting so ticked at the photos?”
“Did you notice all the vegetation? That takes water, and I guess water reminds Pele of being pursued by her vengeful sister. At least that’s my theory. And another thing. See, actually Haleakala isn’t really a crater, but a basin created by eruptions and erosion. Maybe all that green vegetation reminds Pele of the role water and erosion had in creating what we now call a crater.”
“Remember the picture of the big tree that looks like a pine tree? It’s a type of Hawai’ian pine, but not indigenous to the crater so the Park Service would rather it not be there. But, it’s been there for so long it sort of has grandfather rights. If something happens to it, though, it’s pau.”
“Pau?”

“Finished. Gone. They won’t try to rescue it,” says Keone. “And while we’re talking about this, let me warn you to never, ever take a piece of lava from the Islands. You will be cursed with more bad luck than you ever thought possible if you do.”
“More bad luck than hearing your nonsense?” asks Charles Smythe. Keone turns towards Smythe, the shock apparent on his face. Before he can speak, a young woman sticks her head out the door and says, “C’mon you guys, they’re waiting for us.” The students hurry back into the lecture hall.
This time Pele strides across the floor to the lectern like a strong, young woman, and Keone shrinks farther down into his chair as the next scene flashes onto the screen. 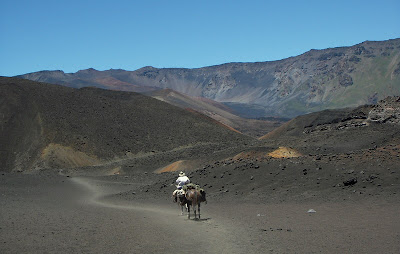 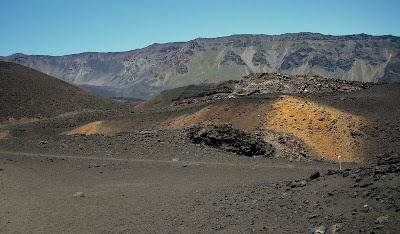 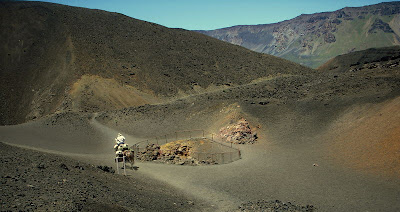 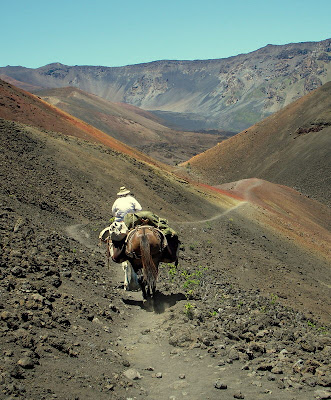 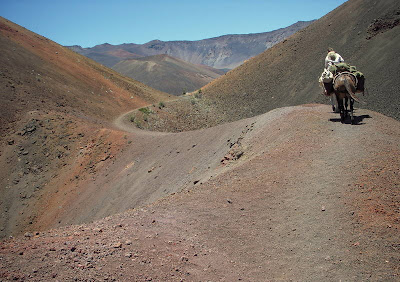 "this is what you call my Paint Pot," says Pele. 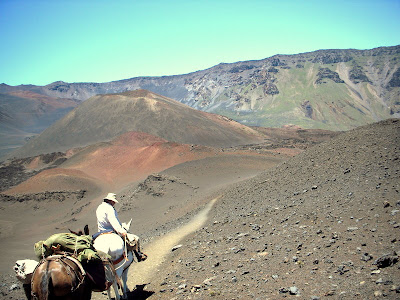 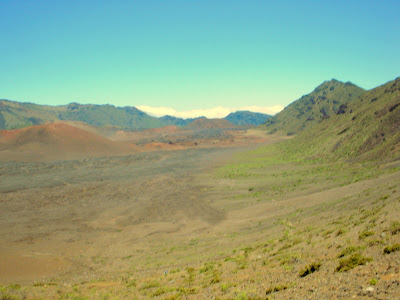 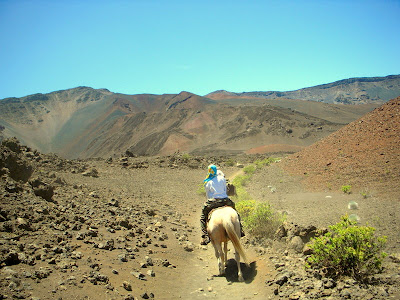 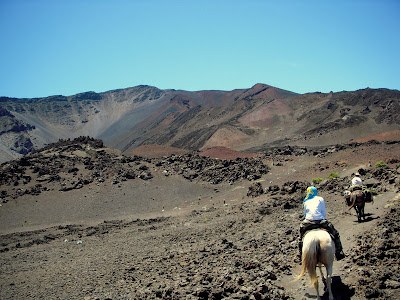 "Silversword in bloom, " says Pele in a strong voice. "This grows only in my crater." 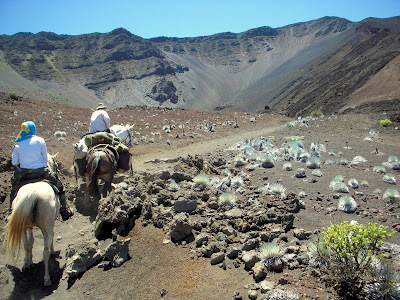 "This is my silversword forest." 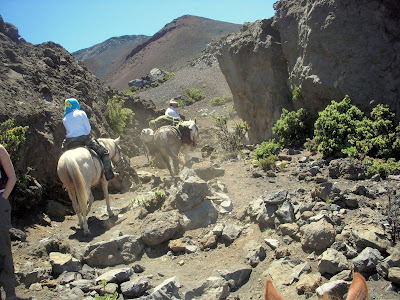 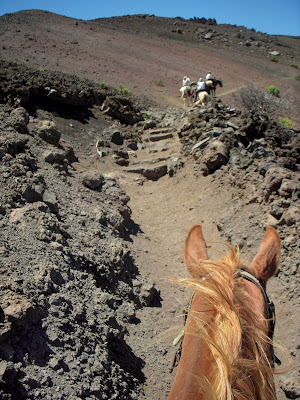 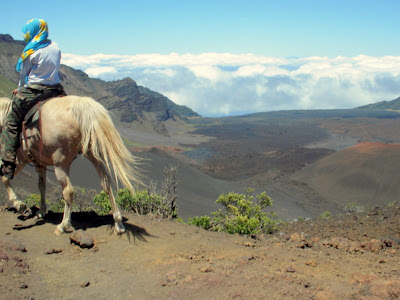 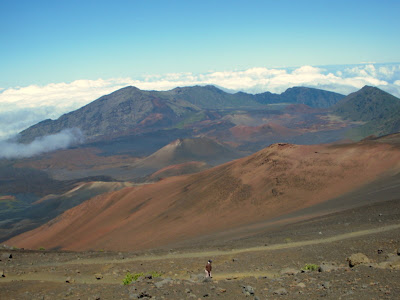 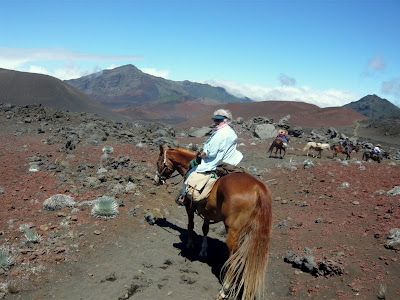 Part way through the presentation, the professor quietly tiptoes to the wall thermostat, checks it, and attemps to move the lever down. It won't move, and each time he raises it up a bit and attempts to push it down again, it sticks in the higher position. Then he shakes his head and returns to his seat, removing his suit coat and loosening his tie. The smell of sulfur intensifies and some of the female students cover their noses and mouths. All the students fan themselves with whatever they have available. Most have perspiration running down their faces, and tears form in eyes sensitive to the intense sulfur smell.

The old woman at the lectern seems to burst with energy as the photos come and change. Her smile grows larger, though there is no humor in it, and eventually it seems to turn into a sneer.

As the last photograph fades from the screen, most of the students applaude the incredibly beautiful scenes. All except Charles Smythe, the lad who had sneered at Keone’s legends.
“Madame Pele? Madame Pele, if I may. Just one remark, please?” says Smythe.
The old woman looks directly at Smythe.
“Yes, well,” says Smythe. “Last semester I went to Kona on the Big Island during holiday break. While I was there I took a piece of shiny black lava from the summit of Kilauea. I have it in my room at the frat house. Now I hear it’s bad luck. Could you comment on that?” Smythe’s sneer rivals that of Pele’s by the time he finishes.
Keone puts his head in his hands and closes his eyes. All the students look with disbelief at Smythe, embarrassed at his audaciousness, so only Smythe sees what happens next.
In a flash, much like a mega-powerful flash bulb, the old woman disappears and is replaced by an exceedingly beautiful young Hawai’ian woman with long, silky black tresses. Smythe briefly considers asking her for a date, until he looks into her eyes and sees a fire so hot and ferocious he is powerless to move.
And only Smythe hears her speak. “You will not live to regret your impudence, young man.”

The next day the campus is abuzz with the news of Smythe’s death. He had returned to the frat house intending to package the chunk of lava and mail it to a postmaster in Hawai’i, say his frat brothers, but as soon as he picked up the lava, he collapsed to the floor. Campus security and EMTswere called, but Smythe did not respond to resuscitation attempts. He was pronounced dead shortly after, the piece of lava still in his hand.

An autopsy is inconclusive and the cause of death is listed as “heart failure,” in lieu of a more precise cause. The only oddity, according to the medical examiner’s report, is a remark about severe burns on one of the victim’s hands.

(NOTE: Obviously, I have taken great liberties with the legendary goddess Pele insofar as actions and words I have ascribed to her. My intent was only to provide some dialogue to prevent a series of photographs from feeling like a travelogue. And besides, it was my muse’s idea; I was only the typist. Pele appearing to humans in the form of an old woman and disappearing from the rear seat of automobiles, as well as appearing to only one person in a crowded room, however, is documented in modern Hawai’an anecdotes. I hope I have not offended her, or any Hawaiians. I live in an avalanche area that is subject to fierce earthquakes. I certainly do not need to add volcanoes to the mix. s/Gullible)