Yes, I told a fib. Just a little one, but a misleading statement nonetheless.

...yesterday, amidst the folding, packing, unpacking, switching suitcases, and refolding, when I stole some time to write a short essay about messages. It's the latest prompt for hungry writers who hang out at Ann Linquist's blog about writing. Ann, you see, is the reason I'm here doing this.

She's also the writing instructor at ed2go who brought hundreds of wannabee writers together. When we found her online, we swarmed on her like flies on a caribou. She took pity, threw out a writing prompt or so. Then, when she decided we were so far off the subject with our back and forth chit chat, she threw out another. Yesterday, it was about messages, and hers is quite clever. There's a link to her site over there on the right, below that flag counter that purportedly shows how many folks stop by here.

Suddenly the muse said, "To hell with packing and all that other unimportant stuff (like making sure I had my passport, Russian visa, ID, credit cards, ATM card, etc.). Let's write. You type; I'll dictate." This is what resulted:

Scattered around and on and under my desk are messages. The messages implore my immediate attention before (insert a date already gone by here). A thick envelope from AARP offers to save me money on prescription drugs. “Outside” magazine acknowledges receipt of the gift subscription for my nephew, and now wants to sell me one also.

The Aircraft Pilots and Owners Association sends its annual Christmas card selection from which to choose, with free return mailing labels if I buy two or more boxes. The electric utility, credit card companies, fuel oil provider all thank me for my last payment and note the date the current invoice amount will be subtracted from my checking account.

I go online, and messages abound at my “spam” e-mail address. Robert G. Allen is very concerned about my income, Viola wants to sell me the magic elixir to enlarge my “member,” and I wonder if that means–for a woman—one boob will become larger than the other, or do you have to take double doses or buy two prescriptions to attain equal enlargement? She’d have better luck if she offered me a magic potion that would reduce those cumbersome things. Another offers life-insurance-in-a-box that I don’t have to pay for, Lufthansa welcomes me to its airline miles program, and Google advises me that I have yet to verify my AdSense account.

Pinned to the bulletin board above my computer is the itinerary and confirmation code for my recent trip to Hawaii, the one I should have taken with me instead of the itinerary for a trip to Mexico in November, which is still (battered, folded, and worn) in the carry-on I brought back with me yesterday from Maui. And, in a manila file folder, one-third cut tabs, is all the accumulated information pertinent to the trip to . Most of which I have not yet read. I still have time; I don’t leave until Friday.

Itineraries, confirmation codes, passport and ID, a small change purse decorated with wolves in which I keep flash cards and extra batteries for my Nikon Coolpix camera—all these things speak volumes about my life the past three years. Before that I was afraid to fly.

It's Judy's fault I am afraid of spiders. Because I did not known my own path in life as a youngster, I became afraid of spiders. Before that, I would let them crawl all over me. She also taught me that spaghetti with only butter, salt, and pepper was much preferable to marinara sauce. Still is.

I think Kathy is the one who made me afraid to fly, because she was. Figuring that she was much more savvy about these things than I was, I adopted her attitude on the whole thing. I could always think of reasons why we shouldn’t go anywhere when my husband suggested a trip. And when we did fly, he preferred the red-eye flights so as not to waste time, which left me comatose the next day and I thought that was a huge waste of time. He slept soundly on airplanes; I did not.

“Someone had to be awake to hold the airplane up,” he told friends. And I am sure than more than one airplane had my fingerprints permanently squished into the plastic arm rest.

My fear kept my husband from seeing , a place he very much wanted to visit. My fear kept me from flying to the Pribilof Islands in the Bering Sea while he was working a construction job there, and he felt—but didn’t say—that I hadn’t cared enough about him to brave the birthplace of horrendous winds and storms.

As quickly as Kathy stopped being afraid to fly, so did my epiphany occur. “I’d rather die in an airplane crash going somewhere than sitting at home on my couch,” said another Kathy. That sounded pretty darned good to me, so I adopted that attitude also.

On my computer are pages bookmarked with sites I’ve scanned for adventure—China by bike, hike, and bamboo raft, animal safaris in Africa, Costa Rica by kayak, Antarctica by ship. I try not to pay too much attention to my bank balance and the interest rate on a CD.

Instead, in my pocket is a pewter token that spoke to me from a woven basket in a gift shop at Kailua-Kona. On one side is an embossed design of a sailboat. On the reverse side is one word: Explore.

That is the message for me, the one I follow daily, whether at home, on the computer with my muse directing my fingers on the keyboard, or in places known and unknown, I explore.

Well, everything about that was true except for one thing: the token wasn't in my pocket. The token had been AWOL for a month or more. One day I had it, the next I didn't. I was pretty sure it was in this house somewhere, and I searched--several times. I checked all my jeans, jackets, assorted backpacks, etc. No where.

Mind you, it had been missing previously for a year or so. I found it in something I rarely wear, and was so glad to have it back, I swore I would keep good track of it. Now, it was missing again, and I really, really wanted it with me on this trip to Russia. It's like an amulet, a talisman, a St. Christopher's medal of sorts.

So, yesterday while I was constantly banging my ankles against the metal bed frame in the spare room--which I should rename Packing Central--I noticed a piece of foil on the carpet. 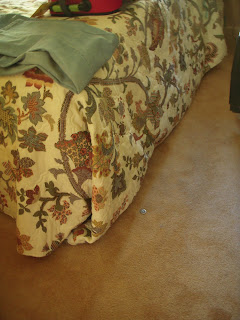 I ignored it, thinking it probably was from a lens cleaner packet, or such. 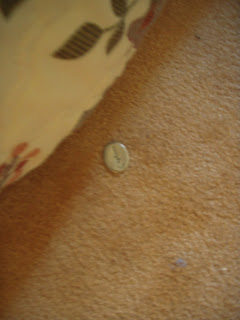 Finally, reaching a point where I had to go do something else downstairs, I grabbed some stuff to put in the trash, and reached for the foil on the floor.

You already know what it was. I have no idea where it had been; I have no idea how it came to appear on the floor. There are any number of possibilities, none of which make sense to me, so I'm not "exploring" that subject any further. 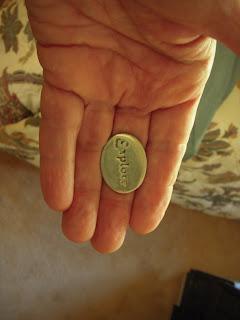 I should drill a hole in it and wear it around my neck on a chain. On second thought, that won't guarantee its safekeeping either, considering the number of times a day I misplace my head.

(If you think this has Stephen King written all over it, consider this: last weekend while I was still in Hawaii, I was standing in front of my friends' washer/dryer--which are outside(!)--and idly noticed a wooden target arrow lying on a window sill.

Coincidentally or not, at the same time at Tern Lake, near my home in Alaska, a huge uproar was building, where people saw a large trumpeter swan with a target arrow piercing its wing and breast. I didn't hear about it until I was back in Anchorage. See my previous story titled, "Enjoy It While It Lasts, Mr. Big Cojones."

On my way home, I stopped at an overlook at Tern Lake, to see if the swan was still there. It wasn't, but I did see several vehicles parked at the wayside along the lake. I think that is when people from the Alaska Sea Life Center in Seward were removing the arrow from the captured swan, then releasing it back to the lake, where it immediately rejoined its mate.

Since then I've been checking on them often. This afternoon, the injured one was resting, and the mate was batheing. I'm guessing about which was which, of course, but all seems well with the swans.) 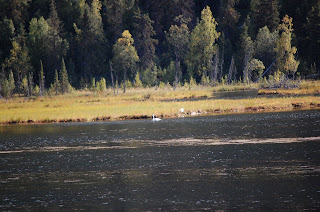 You can just make out the second swan in the grass to the right of the one in the water. Click on these photos for the big screen view. 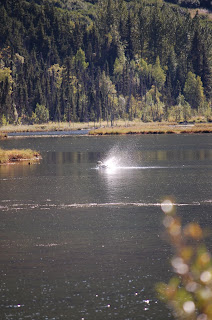 Good grief--I really don't have time for this. By the way, strange things continue to occur while posting at this blog. Notice the different size fonts, the bold-faced type? Not my doing. And another thing. I can no longer drag and drop the photos where I want them to be placed within the text, but I suddenly can copy and paste them!