Those of you who don't blog probably have no conception of how much time it takes to post one story with photos. First, there's conceiving the story in the first place, then selecting the photos and running them through Picassa, doing my best to make them acceptable, considering what I have to work with. Then, because I have yet to figure out the mysteries of posting directly from Picassa to Blogspot and being able to insert text, I have to export the photos to a file under My Documents or My Pictures.

After that comes the scavenger hunt to discover where Picassa hid that file, and this can be a frustrating search sometimes. Then I open your blog and go to "new post," hit the picture icon and browse, and go on the scavenger hunt again to file the file of photos I want. If I'm really organized, I upload the photos--five at a time--in the opposite direction I want them to appear. In other words, the last one first, because each succeeding photo appears ahead of the previous. This is exceptionally time-consuming on my PC because of my slower-than-evolution DSL service.

There are several ways to move photos around once I have them uploaded, depending on the mood of your computer, your browser, the Internet as a whole, and which way I'm holding your tongue. Full moons complicate things no end.

I tend to be guilty of "post haste," which means I am in a hurry and don't take time to proofread for the tenth or twentieth or hundredth time. That means I have to edit again and again and again, all of which is a time-consuming process. Then I have to insert the text to go along with the photos. That's not too bad, but occasionally (frequently) I have to move the photos just so because once in a while if I get too close to the photo, it disappears. Thank goodness for Ctrl+Z, which works once in a while. Otherwise, it's back to uploading the missing picture.

Then comes the fine-tuning, making sure there is some blank space between text and photos, between paragraphs of text, etc., or seeing that there isn't too much blank space. Plus, the photos and text position differently after I publish the post than when I'm working in the "new post" window. In other words, there's no such thing as "print preview." Again, the moods of the computer, browser, Internet, and Blogspot all come into play.

Most of the time when I hit "publish post," I get a very annoying error notice that says "IT" cannot accept my HTML tag. I haven't a clue what that means, except that I have to click the box that says stop showing HTML errors, translate the script to "compose,", scroll down and hit "publish post" again. Every single time. Then once in a blue moon I don't get those error messages. Beats me.

All of the above means that if I knew what the heck I was doing, it wouldn't take so much time.

And then there are the things that get in my way--the distractions. Like, the only day this week it hasn't rained--Wednesday. I think it was Wednesday. Maybe it was Tuesday. I'm still not sure what time zone my head is in.

I went to the post office. Follow along on the drive back as I near my home: 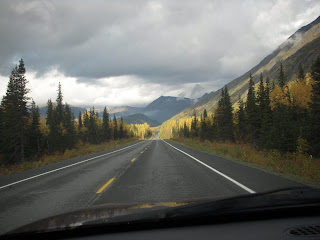 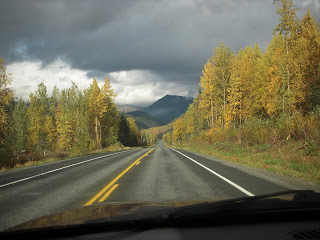 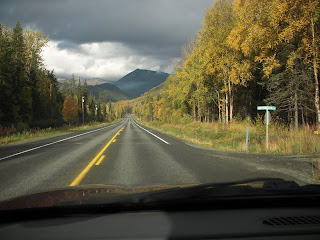 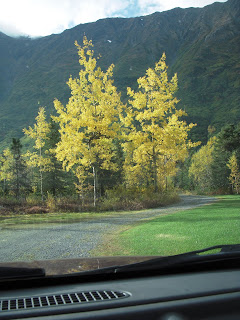 Gasp. These aspens in autumn take my breath away every time. 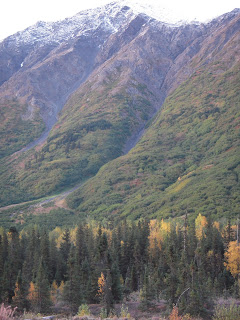 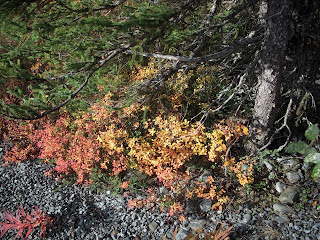 Blueberry bushes alongside the driveway 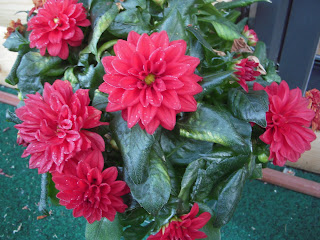 Still not a killing frost this year, and these dahlias are frost-sensitive. 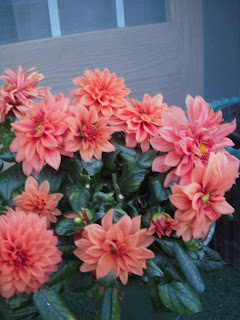 More dahlias on the back deck.

Of course, when the sky is clear this time of year, that means one thing is certain during the night: 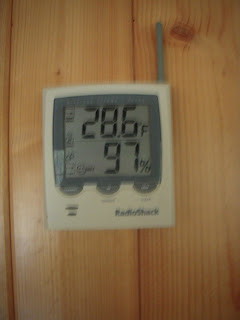 Frost on my truck's windshield the next morning. 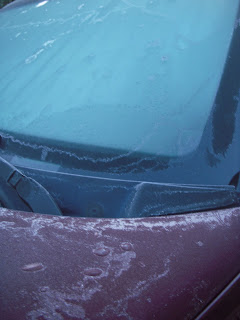 It's just as well I'm not going to show you a photo of the dahlias the next morning. You'd cry.

So, along with spending way too much time on my blog, I am frequently driven to distraction by the scenery around me. Sigh. Back to housework. Just wanted to touch bases with you.
Posted by Gullible at 11:34 AM