Manna from Heaven, in Paradise 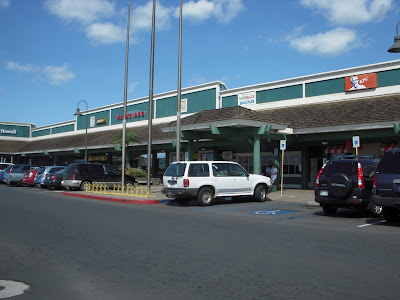 There’s a bright yellow sign for Subway sandwich and, a couple doors down, the instantly recognizable red and white emblem of KFC. The first thing that tells you this isn’t mainstream America is the sign in KFC’s window: NEW! May’s Teriyaki Chicken, famous bowls.” 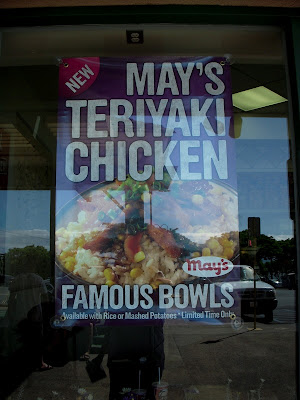 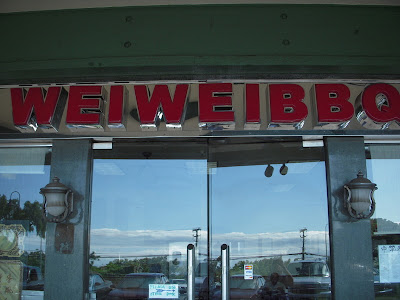 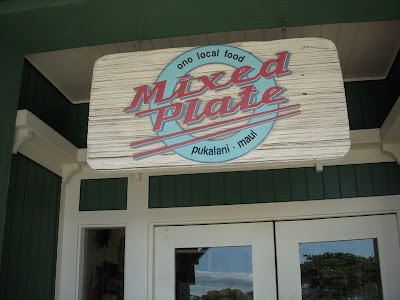 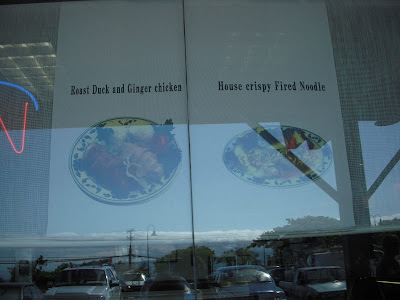 Wedged in between Subway and KFC are Mixed Plate (ono [good]) local food), and Weiwei BBQ, with roast duck and ginger chicken and house crispy fried noodles posters in their front window.
Down the walk and right at the corner, past the chain pizza joint, is the Foodland grocery store, with the ubiquitous Starbucks sign. 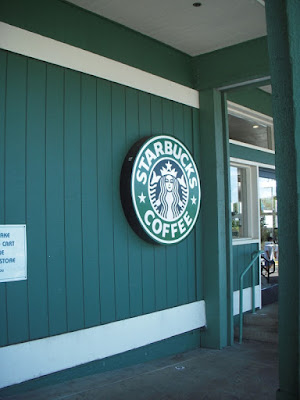 But, on the outside wall is another sign, giving notice that Maui ono plate lunches are available every Saturday. Well, of course. You’re on the Hawai’ian island of Maui. 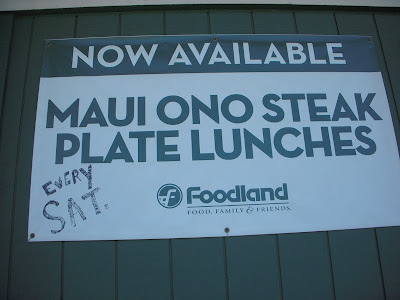 Walk through the glass doors into the air conditioned store, and the first display obviously is aimed at tourists. Bright, colorful Hawai’ian aloha shirts and dresses mix right in with the counter full of chocolate-covered macadamia nuts (for last minute gifts to take home), and large displays of suntan lotion (for immediate and frequent use). 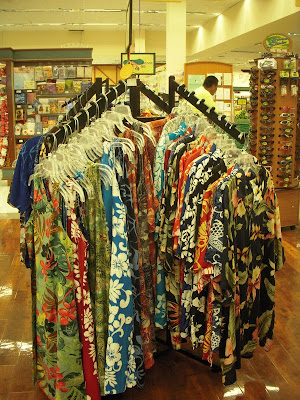 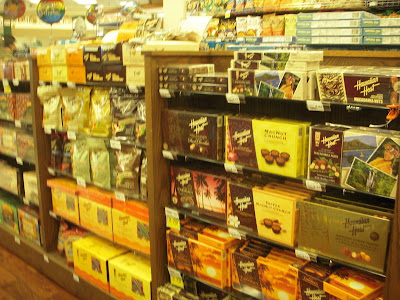 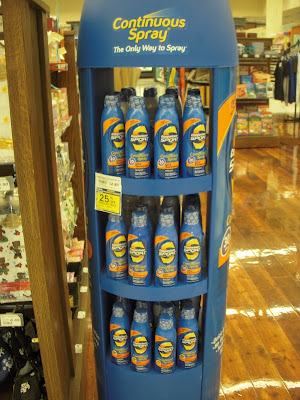 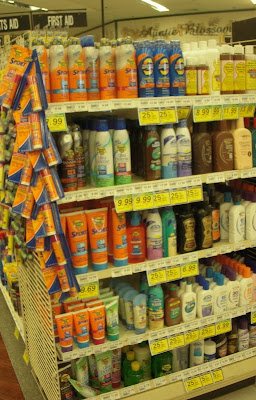 On another shelf are colorful beach towels, and plastic beach toys for the kids. 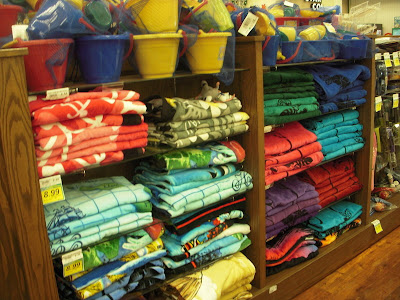 As my time here is coming to an end, I bypassed all the tourist stuff and headed for the grocery aisles, in search of a pen and notebook because, having once again forgotten to carry those necessary items with me at all times, my muse was using a battering ram inside my head to get my attention, and I dared not ignore her. So, up and down the aisles I went, finding this and that and all things Hawai’ian. Especially Spam. 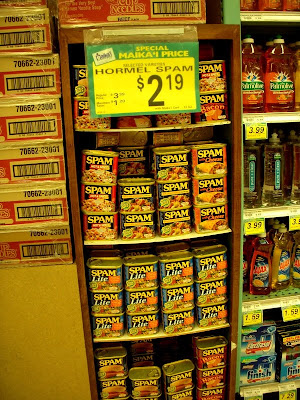 In Hawai’i, Spam is not relegated to a dusty bottom shelf, but is displayed on a convenient end cap in all its many varieties. Ever since Hormel Meat introduced the salty canned pork product in World War II, Hawai’i has led the nation in per capita consumption, followed by (surprise) Alaska. Scrambled eggs, fried slices of Spam and two scoops of rice is a favored breakfast. Or the Spam variety of Loco Moco, rice and Spam covered with gravy and topped with an over easy egg. For Hawai’ians, it’s a meal. For most others, it’s breakfast, lunch and dinner in one bowl.

As I walked through the store, I found some things familiar, and some not so familiar. There were several varieties of poki, or raw fish. 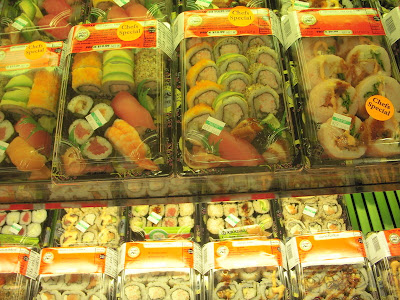 Some boxed lunches a bit out of the mainstream, featuring sukiyaki beef and a kind of fried fish, both with rice. 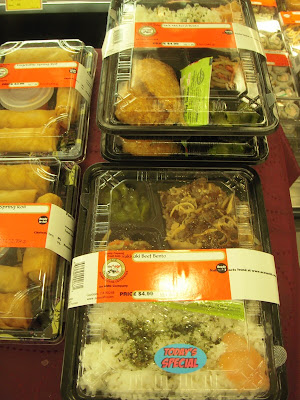 Then, I hit the jackpot: Cookwee’s cookies and on sale, too. Baked right here on Maui, just down the hill in Kahului, they are every bit as good as Dare’s cookies from Canada, and maybe even better, which gives me the perfect excuse for a taste comparison.

Then, while I’m sitting here at Bruce and Betsey’s dining table, writing about luscious Cookwee’s cookies (I bought the macadamia nut and shortbread varieties,) Betsey places something beside my laptop.


OMG,
what could this be
in that cute little
avocado-shaped dish? 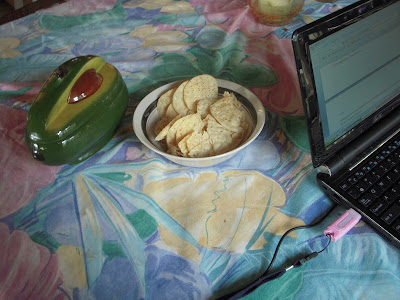 Ah, butter of the gods. Guacamole and Tostitos crispy rounds. 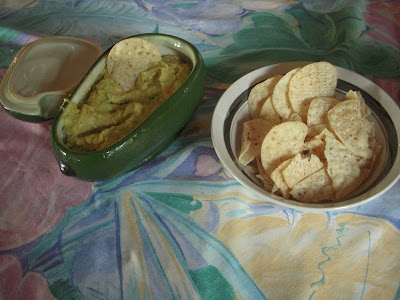 Actually, I knew darn well what it was, because these are sitting on her kitchen counter. 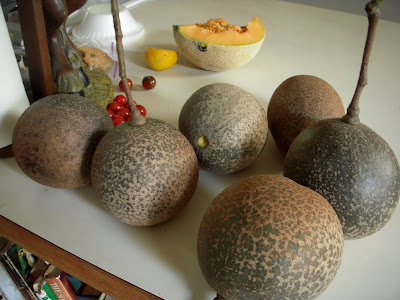 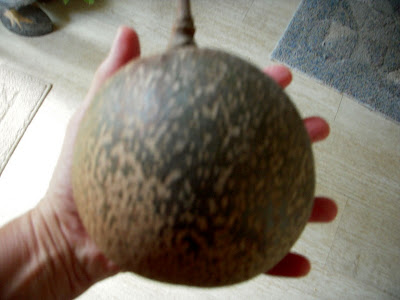 Larger than a softball, these things hang from trees in their yard, these luscious, buttery, so-good-for you avocados.

And as long as I’m on the subject of ono food, here are a couple photos of an apple pie baked in a cast iron skillet in a wood-burning stove in the crater of Haleakala. 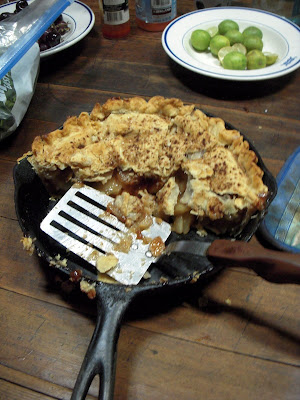 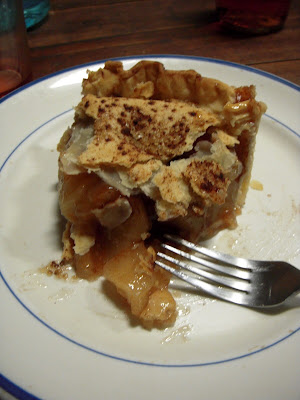 Seriously, does it get any better than this? Okay, maybe the kahlua pig, baked in an imu with ti and banana leaves, is a close runner-up. Mixed with steamed cabbage this dish about did me in. Only strong willpower kept me from exploding. And, would you believe, it was served the same night as the apple pie. 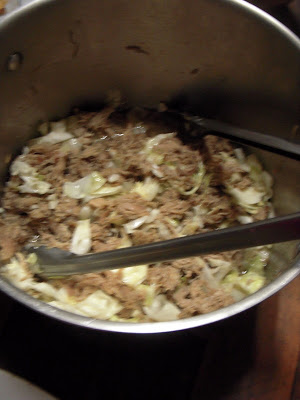 Add to the guacamole and Tostitos some fresh reindeer Polish sausage from Indian Valley Meats in Alaska.....ah-h-h-h-h-h.... 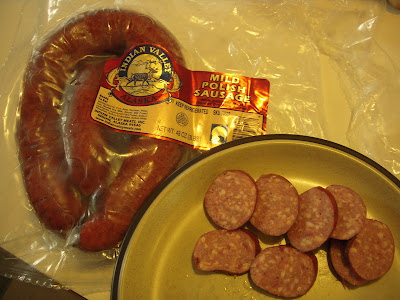 Ah, Paradise, it’s Paradise enow—to massacre Omar Khayyam, but then he was content to lie under a tree with a jug of wine, a loaf of bread, and a book of verse. Oh, wait a minute, didn't he have a "thou" there too?