I’m dreading glaciers right now. Glaciers aren’t quite the correct metaphor for what I’m dreading, but the only other thing that comes to mind is Ice Age, that cutesy movie with a saber toothed tiger and wooly mammoth as BFFs. 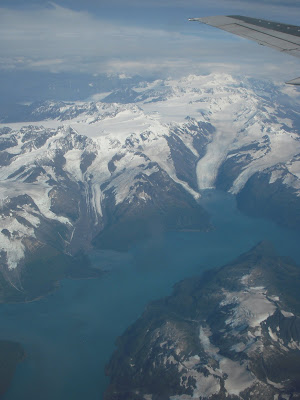 Having slept 18 of the last 24 hours, my brain isn’t up to snuff on this business of analogies, metaphors, and such. Nonetheless, I keep picturing one of the photos I took on my recent trip to , , and back home. It was taken through the window of an Alaska Airlines jet as we zoomed over the just minutes after take-off. Down below were glaciers—a gazillion of them, it seemed.

Either firmly planted in alpine bowls or flowing down mountainsides towards valleys and rivers and lakes, they were everywhere. Their blue density was covered with an early autumn dusting of “termination dust,” an expression that’s original meaning has converged into something entirely different but one that also signifies the approach of winter. And that’s what I think will happen to my PC if I dare download the 1580 photos taken on my trip.

Total instantaneous freeze. It won’t even gasp before it lies down to die. 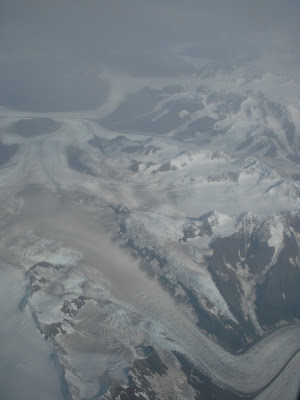 Already got an inkling of what could happen when I removed one flash card and inserted another before the PC was expecting it. Instant freezer-oni. Had to shut the darn thing down so it could get over that brain freeze.

So, maybe tomorrow—after another night’s sleep—I can decide how to tackle this imminent ice age threat.

Among the options are downloading them to a laptop with lots of storage, or transferring them to CDs or thumb drives. I’m not sure, but I suspect that Picassa will kidnap the pix if I try copying them to CDs and thumb drives by using my PC, so that might subvert the whole process anyway.

I need to sleep on this.