My first experience on the M/S Nikolay Chernyschevsky was…..

What? Okay, really, it isn’t that hard to pronounce. Say after me: “Nick-oh-lay.” Rhymes with Frito-Lay. Got it?

You want bad? Try German. They say whole sentences in one word. All the adjectives and adverbs and other assorted modifiers are added onto the nouns and pretty soon you have a twenty-gazillion syllable word and you’ve said everything you have to say and it’s time to go drink beer. I mean, you can really work up a thirst speaking German. It’s a wonder they don’t have Oktoberfest every month, though I’ve noticed they’re having it in September now as well as October.


As I was saying, my first experience on board the boat was somewhat diluted. My bad; I was oblivious. I should have guessed something was up when the accordion guy and the balalaika guy were hitting the hot notes at the 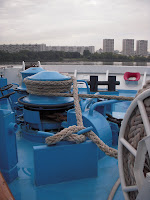 bottom of the gangplank, and some gal in a fancy costume was standing there smiling and holding something in her hands. The thought zipped through that maybe she was taking up a collection. By this time I’d been awake since last July and I was almost comatose from 14 hours of flying halfway around the world and spending several lifetimes in airport terminals.

So I skirted the crowd at the girl in the fancy costume. Later on I found out she was holding a round loaf of bread and a container of salt in a fancy bowl. We... I mean, I, was supposed to claw off a piece of bread and dip it in the salt. To heck with swine flu, use your hands, dude. Yeah, those hands that have been in airport terminals around the world.

Apparently the ceremony is a traditional Slavic greeting to important guests. This is what Wikipedia says:

The tradition gave rise to the Russian word that expresses a person's hospitality: "khlebosolny". In general, the word "bread" is associated in Russian culture with hospitality, bread being the most respected food, whereas salt is associated with long friendship… There also is a traditional Russian greeting "Khleb da sol!" (Хлеб да соль! "Bread and salt!"). The phrase is to be uttered by an arriving guest as an expression of good wish towards the host's household.

As I said, I was clueless so I didn’t get a picture. The next time it happened, though, I was ready and here are the photos from that: 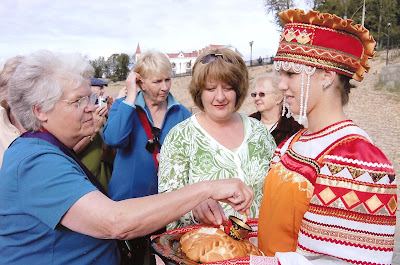 Kindly ignore the double chin on the dame in blue. If anyone knows how to erase double chins in Picassa, please let me know ASAP. On second thought, the other dame in blue has a double chin too. Maybe wearing blue is what does it, like some optical illusion or something. Ya think?


Next up, the front desk. Sorry about the blurriness. 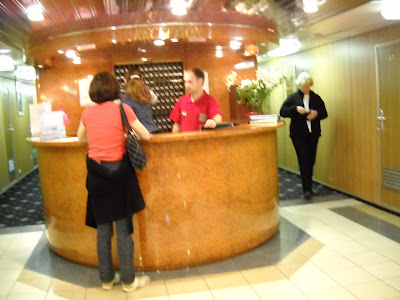 This is where we surrendered our passports for the duration. They held them in a cardboard box for safe-keeping.

How delighted I was to find out my cabin was just a ways down the hallway. We dumped our carry-on luggage, and went up a deck to the dining room at the stern. 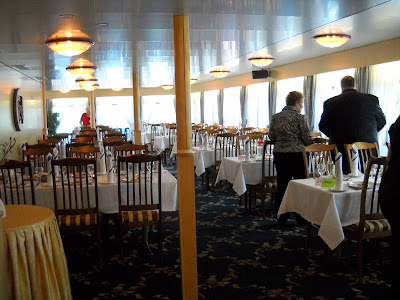 This is less than half the large dining room. On the opposite side of the boat is another larger section, and at the far end is more seating. 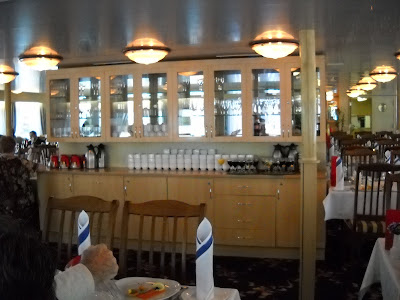 One of the servers' stations.


I totally have no recollection of what we were served for dinner that night. I remember only that a server came around with a tray of glasses filled with red or white wine, complimentary, and I skipped dessert. As for the meals on board, I was never disappointed, except I was sorry we couldn’t eat all they put in front of us, and a good deal of food went to waste. I think. More about that later.

Then it was back to the cabin, a quick unpacking, and to bed. It took me several days to get this picture of the cabin when it was all nice and neat because Marie kept getting to the cabin first and messing up her side of the room, the side on the right in these pictures. These were taken after she’d hornswaggled someone for extra pillows, so I forgave her the messy side of the room. 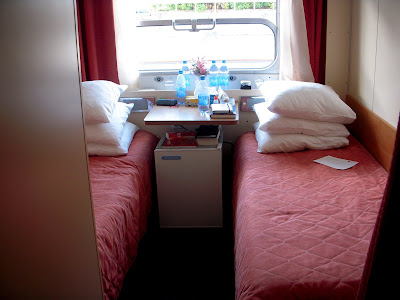 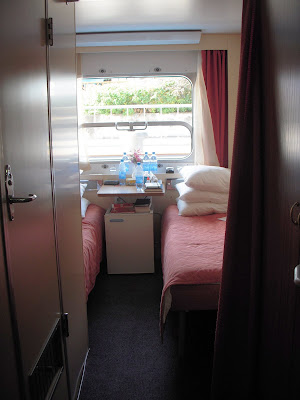 Bathroom on the left, closet on the right.


In the pre-trip information packet Vantage sent us, it said the cabins have a “nautical-style toilet/shower combination.” That led to some interesting speculation, such as where the shower water comes from and goes to. Turns out, it was a clever use of small space. 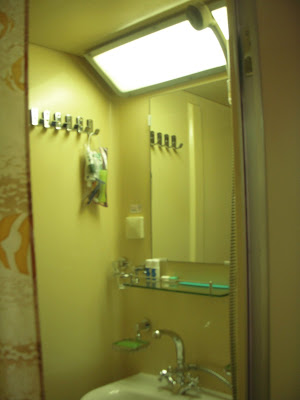 No, the bathroom isn't really green. It's yellow. It's the darned fluorescent lighting that makes it look green. That's an edge of the shower curtain on the left.

This is the sink and above it is a shower head. At the opposite end of this small space is the toilet, which can be closed off with a shower curtain to keep it and the towels dry. So, to take a shower, you adjust the water temperature at the sink faucet, pull the little knob, and gasp when the cold water hits you. After the water warms up, everything’s fine. Clever, really, except you don’t want to step into the bathroom in stocking feet until the mat on the floor’s had a chance to dry.

The next day was a tour-Moscow day, but I had a chance to sneak up to the bridge deck and bootleg some bridge photos. All for naught, because a few days later we had a chance to tour the bridge and speak with Captain Vladimir Kotik. 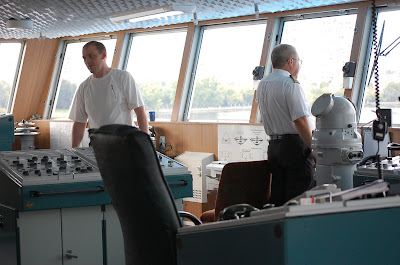 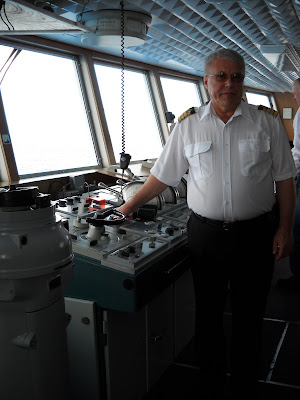 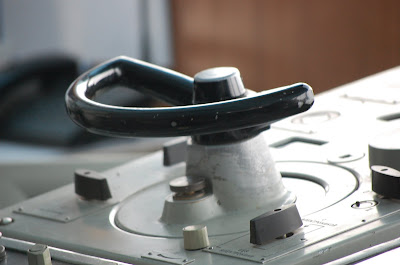 The helm, the wheel, the boat-turner thingy. 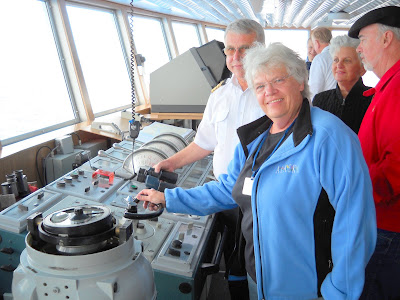 And they let me hold it! 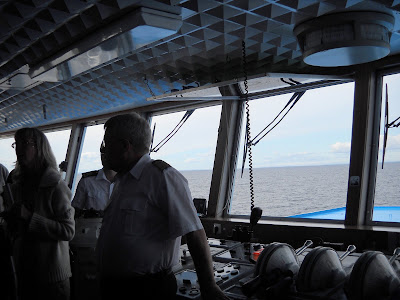 But, you'll notice that we're out in the middle of this big freakin lake with no possibility of running into anything. And besides, the boat was on auto-pilot while the captain made nice with the tourii. 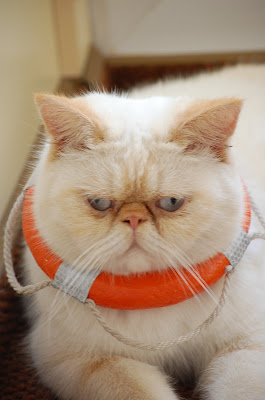 This is Sailor. He's been running the boat for about two and a half years. You'd be mad, too, if your face was smashed in. Or perhaps it's the life ring he has to wear around his neck when the tourii are in the vicinity.

Here’s some info about the boat. She’s clean. Very, very clean. Inside and out. She’s 410 feet long and 54 feet wide. She draws about 9 feet of water, and can reach speeds of 17 mph with her three 1000 Hp diesel engines. She was built in in 1981, and refurbished in 2007. Her passenger capacity ranges from 223 to 265, depending on her charters. She has five decks, includes several cabin plans, two dining rooms, a conference room, two cocktail bars, a fitness room, ironing room, and medical room. She carries a crew of around a hundred.

Originally I was under the impression that the boat was government-owned. I was in error. Capitalism has come to Russia. One of our group, Missy, had been on this boat ten years prior. She said it was a lot nicer now. 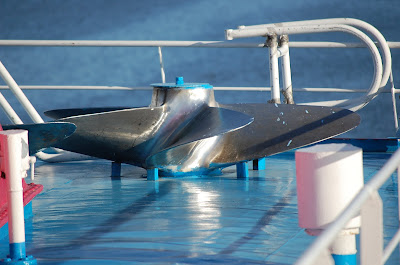 One of the extra props.


She also carries two extra props. Wonder why? Do you think they fall off?

While I was up there sneaking around, I took a shot of the river and the apartment buildings across it. I include it here because it seems to be the only shot of the sundeck I have, and a miniscule portion of it at that.. More about those apartments in another story. 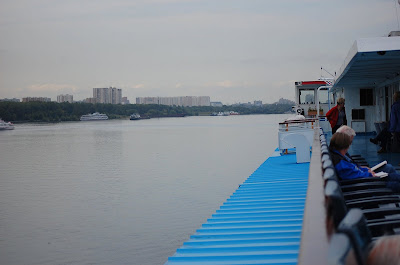 This isn’t our boat, but a sister ship. Gives you an idea of how we looked. I think this is the Lenin. 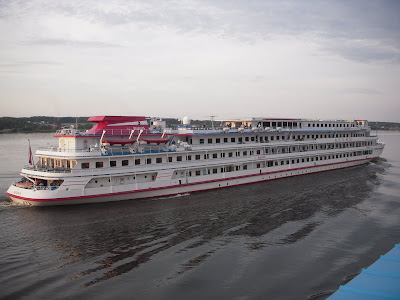 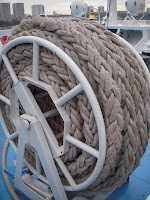 And that’s the boat. By the way, she’s named after (duh) Nikolay Chernyshevsky, who’s a famous Russian author. He wrote this really important book called “What Is to Be Done,” that turned out to be a major influence on some other Russian guys—like Lenin and those other revolutionaries. Chernyshevsky really ticked off the Russian tsars and was sentenced to a mock execution (??? beats me, that’s what his biography says), some prison time, and then got to live out the rest of his life in the Siberian hinterlands, at government expense, no doubt.

Next up: some of the crew.