The Russian Journals, Part One, Humoring the OCD

That persistent streak of obsessive-compulsiveness in me insists that I start at the beginning if I’m going to tell you about my recent river boat cruise in . Therefore I will humor it this time and introduce you to the cast, crew, boat, and waterways on which we traveled.

This adventure had been almost a year in the planning, mostly to take advantage of discounts for early reservations and payment. So, on the evening of Sept. 4, my Alaska Airlines jet cruised into , where I would overnight. 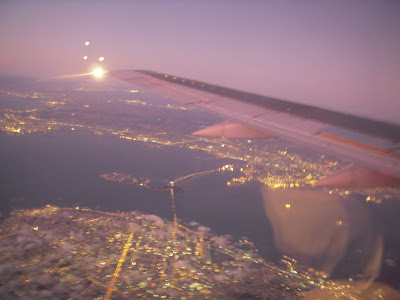 San Francisco at night with a full moon off the port wing.

The next morning six of us met at the SF airport—finally. Marie and I had spent the night at a nearby hotel, and I think we stood in three wrong lines at the SF International terminal before we accidentally found the correct line. Eavesdropping helps in situations like these. The biggest problem was that our tickets said Lufthansa, but the flight was operated by United Airlines. Actually, it was a cattle car that UA operated, and I have nothing nice to say about it. Other than the chicken curry, that is. That was nice.

I’m going to show you a photo of a Lufthansa 747 that was parked next to our UA 747, because the cattle car we got on was hidden behind one of those extending gangways. Also because I’d really hoped we would fly Lufthansa. Our destination was , , where we would then board a Lufthansa Airbus for . 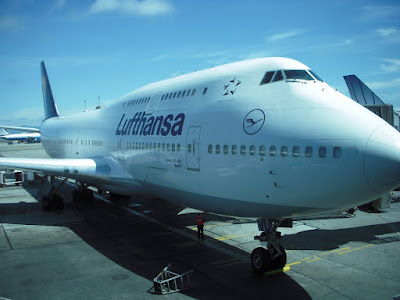 Once we found the correct line and the correct gate, we were found by Katy, Norman, Kathy, and Missy. Two others—Tom and Julia—had left earlier from . Here's the Gang of Eight, or Here Comes Trouble, as Katy named our Vantage group. 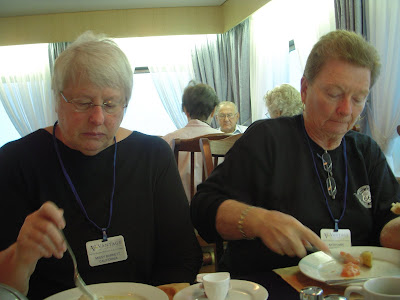 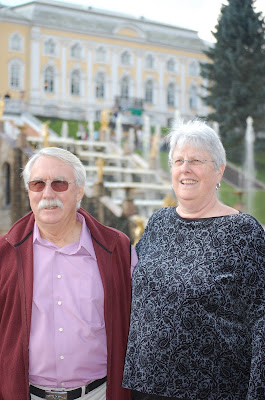 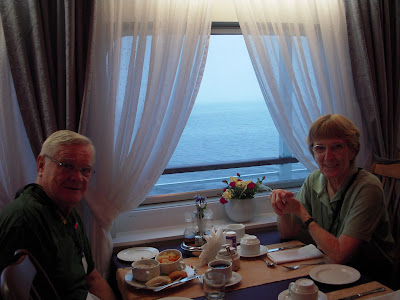 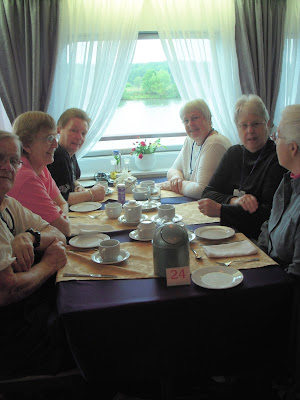 Left to right: Tom, Julia, Kathy, Missy, Katy (or maybe that’s Katy and then Missy, no, I think it’s Missy and then Katy. Or whatever. They're identical twins.) Anyhow, that’s Marie on the right. 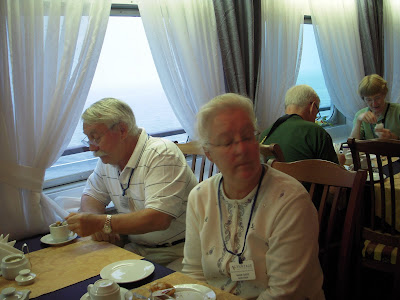 Okay, this is Marie. She's Norman's sister and is making her first trip out of the country. 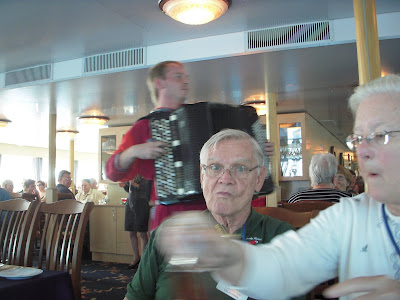 Maybe this is Marie. Well, dang it, Marie, if you’d just hold still once in a while, I might be able to get a decent picture of you! (Sorry, Tom.) 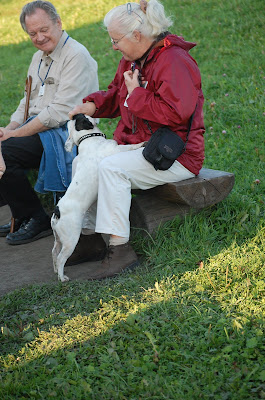 Ah, this is Marie. The one in the maroon windbreaker, the windbreaker that’s a gift for her husband who’s tending the kitchen stove back home in .

And that's the gang. Oh, wait a sec. Forgot moi. That's me, the fuzzy-haired one. Nothing like a little humidity to give body and lift to the hairs. And no, I'm not listening to an iPod or Walkman or any such thing. I'll tell you later about the earphones. If you look closely, you can still see the wrinkled skin below the eyes from the Maui sunburn. Really. That's where the wrinkles came from. Sunburn. 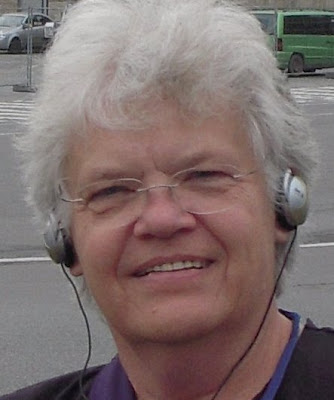 By the way, it might seem to you like we're old people. We aren't. We just look that way.

The flight from to Frankfurt took us northeast over , Hudson Bay, the southern tip of Greenland, and the (which I glimpsed through the cloud cover). Flying time was about eleven hours, time for four full-length silly movies, a rerun of Desperate Housewives (I could identify with "desperate" about this time), and another rerun of something I have totally forgotten.

Okay, now you’ve met the gang, and we’ve arrived in . We were destined for a bus ride from the tarmac to the terminal. On the way, I counted 26 construction cranes hovering about the terminal, not counting the little truck cranes, cherry pickers, etc. The terminal was….busy. I think every airplane in the world had just disgorged passengers at the same time and everybody was late and everybody but us knew where they were going. At length we found an out-of-the-way gate where we had a three hour layover. It was behind a security check-point with unsmiling officers, had no restrooms, and a vending machine that took only Euros, which none of us had. So we suffered in silence. Somewhat in silence. 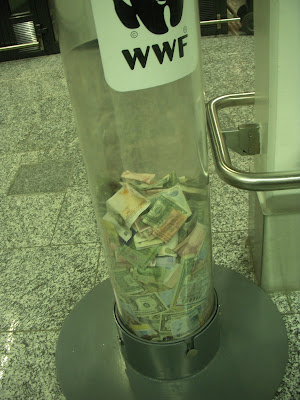 To heck with milk, got foreign currency to spare before you head home? Leave it here for the World Wildlife people.

Finally we were told to gather up all our stuff and get in line outside the waiting area for a passport check. Then we went back in and waited some more before boarding the Airbus for the three hour flight to . The Airbus was a limo compared to the UA 747. I'm short, only 5’2”, but I had at least four inches of room between my knees and the seat in front of me. On the 747, my knees touched it. I think the Airbus seats were wider, too.


Incidentally, it might seem to you like I travel extensively, but this was the first time I’ve been on the European continent. I'd love to scan the Russian visa in my passport and show it to you, but something tells me that might be a tad illegal. 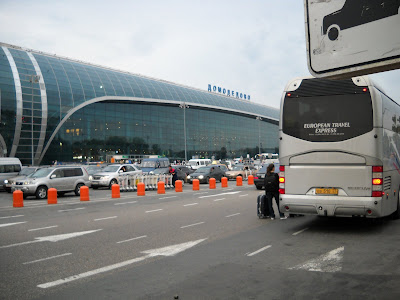 Looks nice and modern, doesn't it? Up close is another story. It desperately needs some TLC. Mega-doses of TLC. Before all the metal holding the glass in place comes off and the windows fall out.

Domodedovo—the airport. I am absolutely positive that all those people who were scurrying about the airport had just landed at this airport also. It was chaos. Our gang made a beeline for the ATM machines to get rubles, while a young, painfully thin young man holding a Vantage sign tried to keep us together. Vantage was the name of the tour company, and for the next couple weeks, we all followed Vantage signs like sheep.

Eventually, the herd (there were many others who’d arrived on the same flight) was escorted out of the terminal and across the street, where we waited for a coach. A group beside us on the sidewalk tried to commandeer our coach, but that skinny young man asserted his rightful cause, kicked off the squatters, and we boarded it for an hour and a half journey to where our boat was docked.

I'm not sure if I should tell you about this or not, but it was at this point The Ugly American reared his head. He and his wife plopped down in the front seat, right behind the driver. Even after he was told by another tourist that seat was reserved for the tour guide, he said, "That's not a tour guide. That's just a boy." So the slender young man who had successfully shepherded us through the chaos of the airport, corralled us after the scattershot ATM circus, led us safely across busy traffic in a construction zone, and rescued our bus from pirates, had to sit halfway back where he was unable to use the microphone in case he wanted to tell us something.

As a result, he was right in front of me, and I got to ask him questions. About the horrid traffic, he said it was mostly city dwellers returning from their dachas (country homes) to the city for the workweek.

As for The Ugly American, he continued to amuse and titillate us throughout the ensuing trip, and his latest effronteries were duly reported whenever the Gang of Eight assembled. Finally, at one point I made a mental note to apologize to the tour guide for his behavior on behalf of us all. But, I didn't. I figured they were professionals who had seen his type before. Nonetheless, I was embarrassed for us and our country.

I was only half paying attention when we passed by a line of what I thought were nuclear reactor cooling towers. Later on our guides would insist (“I told you before…”) that the towers were used for gas-fueled electrical generation. Okay. Buy that? Go online and check it out. I have no idea why they are so sensitive about it.

After a long, long time—long enough to give us a hearty taste of area traffic—we arrived at the boat terminal. In a park adjacent to the pier, a weekend celebration of ’s 850th anniversary was winding down.

Then we saw it—the M/S Nikolay Chernyshevsky. This would be our home for the next eleven nights. 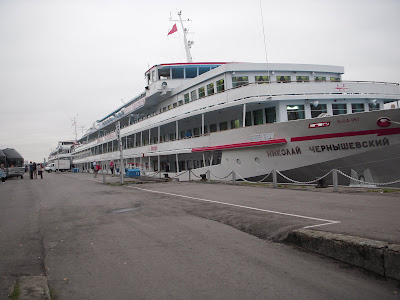 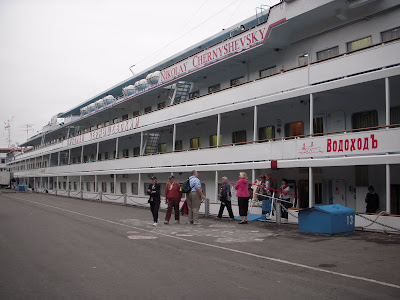