Now that we have the cast and crew introductions over with, I can tell you two important things I learned on my first morning in .

The first is that it’s Mos-COH with a long “o” as in “Hello.” It is not Mos-COW. There’s also the Russian version, which is spelled Mockba and pronounced Mosk-VAH and rhymes with vodka, appropriately. Actually, there’s some dissent about the “cow” thing, and both pronunciations are acceptable in the and other English- speaking countries. But, if you go there, try not to call them “cows.”

For the second thing I learned, I need to show you a map first. 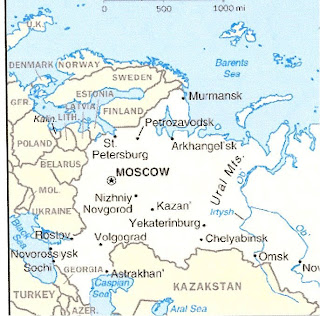 (Used by permission of Creative Commons)


See there in the sorta center? Looks all landlocked, doesn’t it? Actually—and this is what amazed me— is accessible by five seas. Here’s another map. 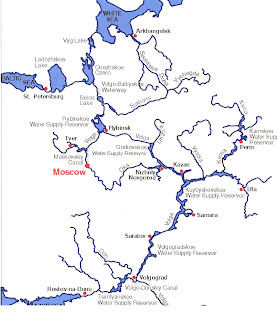 (Used by permission of Wikimedia Commons.)

See? Five seas: the White, Black, Caspian, Baltic, and the Azov, which is a little dinky body of water with an average depth of 46 feet, and a maximum depth of 50 feet. It’s down there at the bottom left, just off the which doesn’t show on this map. What connects all these things are rivers, canals, reservoirs, lakes, and a system of locks to raise and lower ships along the way.

So with this intricate inland waterway, our cruise began at and went to , which is on the of in the . There are two important rivers involved, the Volga and the . Here’s a map of our journey: 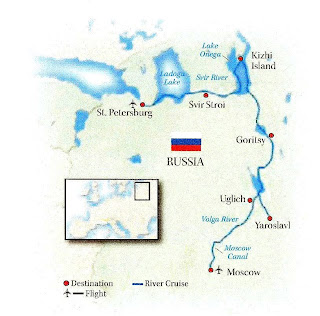 This was only a part of the vast inland waterway system in western . The River Don plays an important role in the southern part of the waterways.

You remember the song “Volga Boatman?” Come on, you probably sang it sitting around the campfire at summer camp.

Once more, once again, still once more

Once more, once again, still once more."

Or, maybe you sang this version:

Very, very slowly, almost a funeral dirge. Actually, though it is an authentic bargeman’s shanty, it could very well have been a dirge a long time ago because convicts and poor peasants were paid miniscule sums to tow ships and barges up the . Often the peasants were barefoot and half starved, and they suffered immensely, many not living past thirty years of age.

Here’s a copy of a painting by Russian Ilya Repin that depicts the burlaks (barge haulers). It’s in the public domain now, so I can show it to you.

I thought about that later on, while we motored along serene rivers and canals. How easy it was for us; how back-breaking it was for them.

Our portion of the trip was about 870 miles, with upsy or downsy in 18 different locks along the way, including a series of six locks in a 15 mile stretch that dropped us a total of 263 feet. Unless my online meters-to-feet conversion table was lying to me—80.25 meters is 263 feet, isn’t it?

So I shall now post a series of pix that show what it was like going through one lock. Then, I’ll show you so many various lock photos you’ll never want to see another lock picture the rest of this journey.

Don’t ask me what lock this was. A lot of them we entered at night, and I slept through them. I do think, however, that this was one of the six-in-a-row locks. 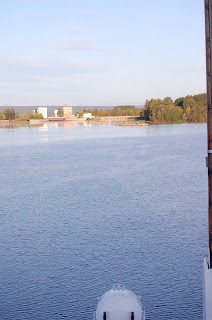 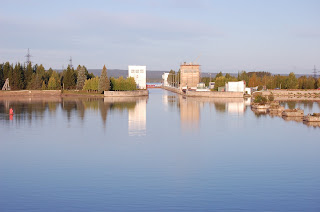 This lock is flooded. It will lower us after we are inside. 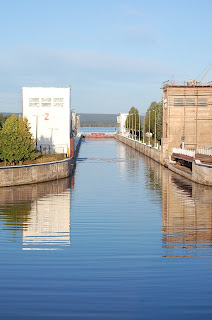 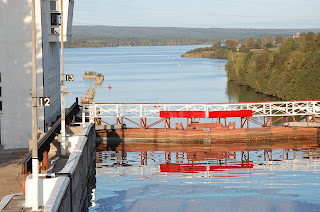 See how the water level behind the gate is higher than outside? No pumps--the lock operator pushes a button and valves either flood or empty the lock, thereby raising or lowering the boats. 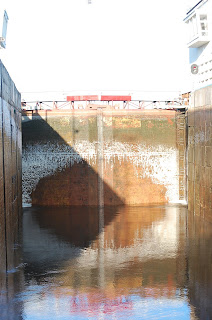 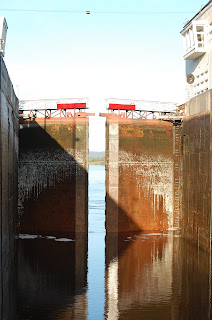 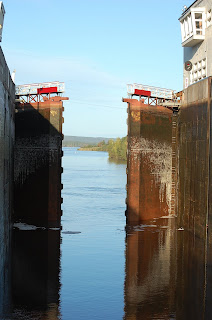 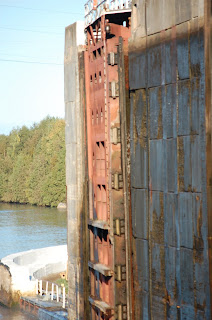 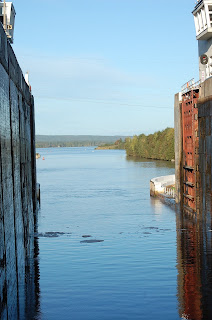 That was an open lock—no bridge or arch to pass under. Here’s a lock that had an arch: 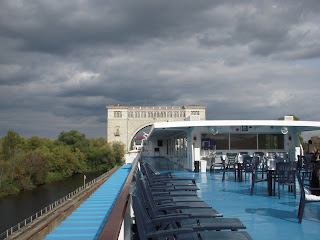 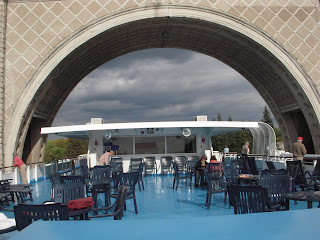 Suck it in,people. By the way, this is the sundeck--the one I thought I didn't have a picture of. 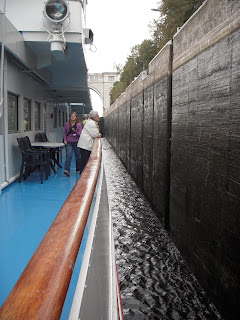 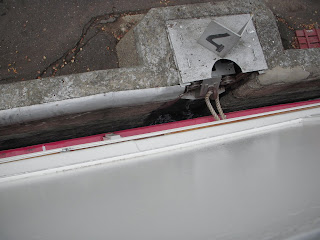 The boat ties up to one side of the lock. 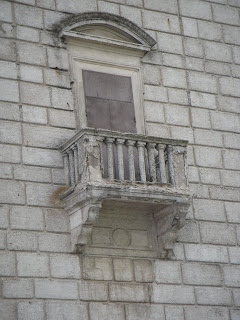 This balcony could maybe use a bit of TLC. 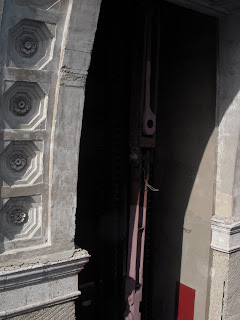 In this one, we’re following another boat out of a lock: 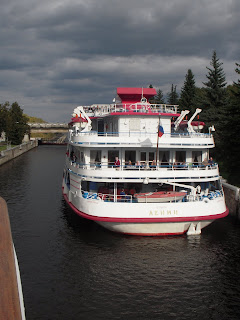 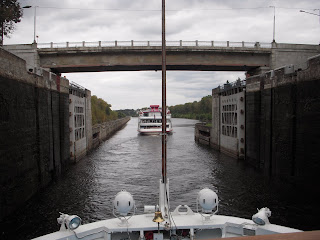 And some had drawbridges over one end: 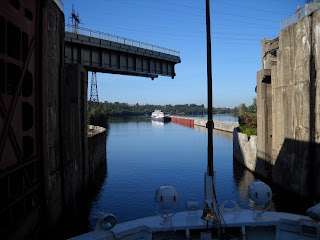 Some had some interesting features added: 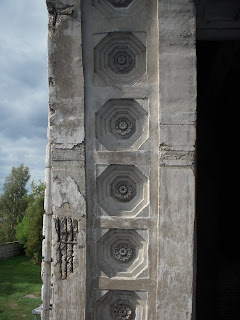 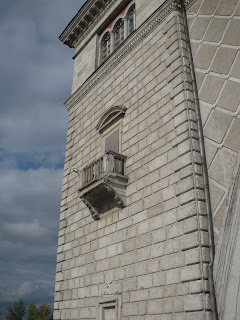 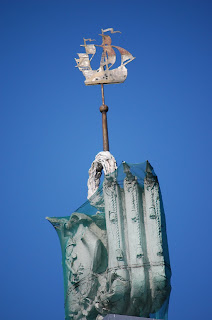 I don't know what this is. It might be a hydroelectric generating facility, as several of the locks had them adjacent to them. 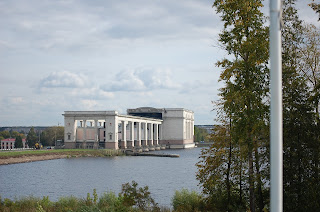 Some of the locks were very plain, some looked relatively new, and some were exquisite. This gate was being raised or lowered. I thought the round gears in the sidewall were fascinating, as well as the twilight colors. 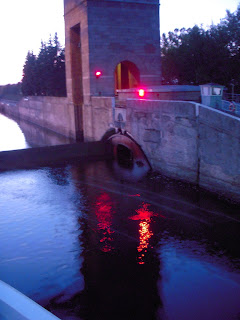 Had enough of locks? Ready to get to the good stuff? Okay, sunset for now. 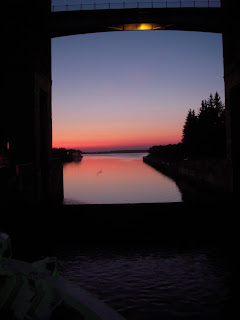