I just surfaced from another trip an hour ago, and I don’t mean the one to and places in between. This trip occurred between sleep hours 18 through 22 of the past 30 hours, and like its predecessor, involved a guided tour.

I really hate to admit this, but I became a litterer on this latest trip. When our deluxe coach passed by some roadside “sculpture,” mini-castles made exclusively of sandwich-sized Styrofoam containers, the tour guide said it was an inside joke in response to some political shenanigans that had been on their television recently, and she encouraged me to add my piece. My contribution turned out to be a Styrofoam plate bent into the shape of a triangular face, with two eyes punched in it.

When I went to photograph it, the batteries in my camera were exhausted and I found I had forgotten to bring new ones. Our next stop on the trip was a ballet performance on ice skates. The second act had the dancers performing a chest operation on Bobby Kennedy. That involved using humongous bearing pullers and C clamps like the ones my husband used when he was working on heavy equipment. 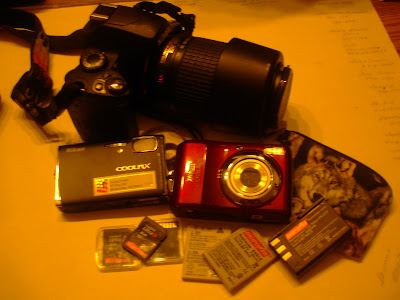 Fortunately, the guide gave us the high sign before they balleted Bobby’s chest open, and I was able to make a quick stop at the small concession stand in the lobby in my search for AA batteries. I found one lone pair and decided to make sure they fit before I purchased them for $28. That’s when monumental dropsy and fumble-itis set in, and things started popping out of my camera. Eventually I got the new batteries inserted and received an error notice on the camera’s LCD screen for my efforts.

I decided to pay for them anyway, thinking that if I got all the popped-out parts reinserted correctly, they would work. Then came the money thing. The clerk said they only cost $4.95 instead of the $28 I’d been told previously, so I handed her a twenty. She punched it into her cash register, which immediately quit working. Ten anxious minutes and one annoyed tour guide later, she handed me a sheaf of receipts and a plastic card with credit for future purchases at the stand in lieu of change.

I woke up in the heat of the discussion that ensued.

I lay in bed for an hour dissecting and analyzing this latest dream, which was much better than the ones I had during sleep hours 14 through 18, let me tell you. Here are its roots:

1. The battery thing. I took three cameras with me to because of the battery thing. And yes, I did not have the spare battery when my Nikon DSLR 40 quit during an evening tour along the rivers and canals of . I’d been lugging it around for days,. Min you, just not this sunset evening. Nor had I taken the battery chargers on the trip because everything I’d read said there were no adapters on board the cruise boat, and uses a different electrical connection than the . Previously, my Nikon Coolpix S52 had exhausted the third and last battery, which left me using the hated Nikon Coolpix L20 that takes AA batteries, theoretically available everywhere.

2. The ballet. Maybe I’m feeling some guilt about not going to the ballet at the Hermitage Theater in . I chose to stay back on the boat, finish packing for our departure the next morning, and indulge my yearning for sleep because of this cold I’d succumbed to. It might also have had to do with the necessity of dressing up for the performance, and dressing up is not something I take to eagerly when I’m sick. Or not.

3. Bobby’s chest operation. Took me a while to figure this one out. Then I remembered that beneath the precarious stack of books on my bedside nightstand, there was a Time magazine with a portion of Teddy Kennedy’s face peeking out. No idea why I selected Bobby for the chest-spreading operation, except he always was a skinny, weak-looking guy.

4. The littering. I was distressed about this, litter Nazi that I am. I saw little litter in , so this wasn’t their fault. One of the things I did during the six hours I was awake yesterday was go to the post office and collect a sack full of mail. Instead of going directly home, I drove a mile past my house to check on the swans at , one of which had been shot through the wing and breast with an arrow. (See my previous story, “Enjoy It While It Lasts, Mr. Big Cojones.” I saw only one swan, and my heart tells me it’s the injured one because it was onshore and not in the water feeding. I’m also afraid it might be the surviving swan. Have to check this out tomorrow.) Anyway, I picked up some litter at the pullout while I was there, hence the Styrofoam misdeed. I'm guessing, but I suspect the "political shenanigans" are related to the Acorn scandal I heard about when I got back to the USA.

5. The dropsy and fumble-itis. On one particular day, my shipboard roommate Marie said, “You don’t feel very well, do you?” When I verified her suspicion, she said, “I can tell because your side of the room is a mess and you aren’t like that!” Right again, and that’s what I noticed about this Russian cold. I couldn’t do anything without dropping something or fumbling around trying to get it right. I whined and sniveled about it often.

I love it when all the pieces of a dream or nightmare can be traced back to their roots.