I’ve already introduced Captain Vladimir Kotik and Sailor, the cat that actually runs the boat. But, I’m going to show you a couple more pictures to prove to you what good buds the captain and I became. Truly. He let me steer the ship. (It was on auto-pilot in the middle of a huge lake.) He had his picture taken with me. (I, along with all the other tourii, had our pictures taken with him.) 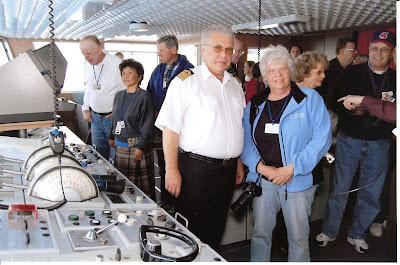 Our second day on board, two important things happened. We’d been out all day touring city, which I’ll tell you about later. Then, we had to rush back to the boat for life boat drill (again, later), and the Captain’s reception, followed by the Captain’s dinner. This is traditional on big boat cruises, and apparently on little boat cruises as well. It is a dressy affair, with men in suits (tuxes on big boats) and women in cocktail gowns.

Many in my group passed on the reception. I donned my best black slacks, my best black tee shirt, and my wrinkly (on purpose) purple whatever-it’s-called. Not a sweater or a jacket, but like a dressy over-shirt. Tells you how much I dress up. Then, up to the conference hall on the top deck, where someone handed me a flute of champagne and it all went downhill from there in the behavior department.

I should tell you that I am shy and meek. I don’t do well in crowds, or around strangers. But, doggone, these people kept reading my nametag that had “” under my name, and everyone wanted to ask about The Sarah. You know—Sarah Palin. I got to yakking with Bill and Lois from Wisconsin, and Bill, devil that he is, started egging me on and pretty soon I was up front with the musicians while he took my picture, just to prove what an idiot I was. 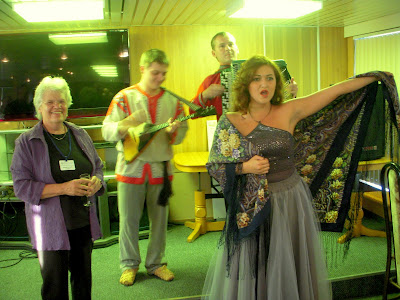 By that time I was feeling pretty smart (champagne will do that to me) and when another man asked me how far was from where Sarah Palin lived, “Not far enough” blurted out of my smart mouth. Every time he saw me after that, he told me what a great remark it was. At the end of the trip, as we were all leaving, he came up to me and said, “You still had the best line of the trip.”

Oh, I seem to have gotten off track. Let’s go back to the Captain’s reception. Here’s a photo—somewhat wobbly, though—of the crew. Well, most of the crew. I didn’t see any of our dining room servers there. 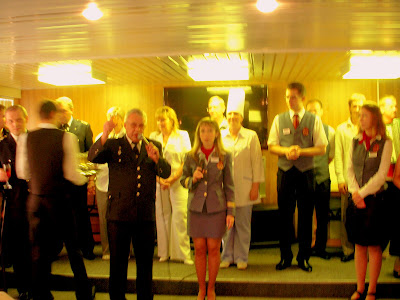 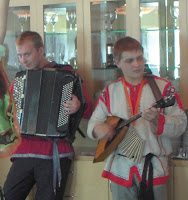 Here are the accordion guy and the balalaika guy. I love balalaika music. The balalaika is a musical instrument of Russian origin, something like a guitar, but triangular in shape. Most have three strings and are played with the fingers or a leather plectra (pick).

You can lots more info and audio if you Google “balalaika.” As for the accordion, well actually, the concertina is my favorite of the two—probably because a friend of mine is a master concertina maestro. (Is that redundant?) But, accordion it was, and I love Russian music too.

You’ve already seen the singer in the photo of me with the group. Then, there were the two folk dancers. I don’t know their names, either. I’m bad that way. 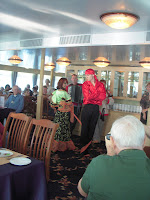 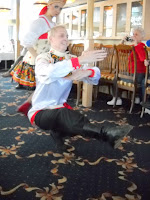 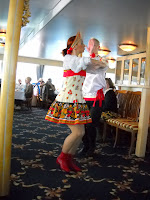 Oh, my knees hurt just watching this. Why? Because one night in the Double Musky ski crowd bar a long, long time ago, when I was far too smart for my own good, I did this thing--this knee-kick called the kasachok. I couldn't walk for three days, then three more weeks without ferocious pain. I've had shin splints ever since.


Next are some of the wait staff, the ones we saw most often. 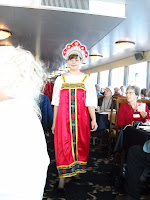 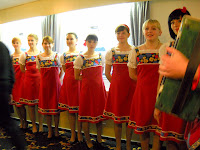 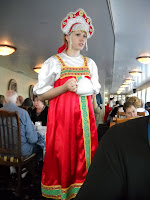 They seemed to wear different traditions costumes almost every night. I began to wonder if the whole first deck wasn't a huge wardrobe closet for them.

Then, our own personal waiter, Andrew. He celebrated his 24th birthday during the cruise and

was late for work the next morning. He also had bed head. He was a doll. Kathy made him a birthday card, and we all added some words and some rubles.

That's sweety Andrew with some gal. I don't know who she is.


And that’s the crew. Next I’ll tell you about the canals, rivers, lakes, reservoirs, and waterways of our journey. 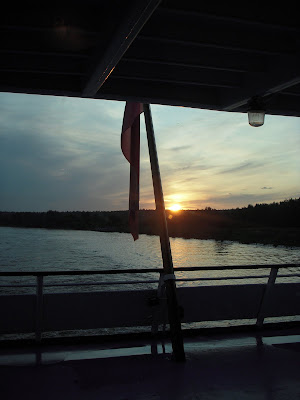 PS: Fess up time. Before you get any really, really wrong ideas, I didn't finish that glass of champagne at the Captain's reception.