Enjoy It While it Lasts, Mr. Big Cojones

I'm not going to apologize for this rant. When you've read it, you'll understand why.

Somewhere out there, and I'm very embarrassed to admit that "somewhere" is Alaska, struts a dude with big cojones. I'm referring to him in the masculine gender because I cannot, cannot admit that a woman could have done this.

He did so. In my neighborhood, in my lake. Twice in past few days it's been on the front page of the Anchorage Daily News (go to www.adn.com for pictures and full story). Yesterday, Tuesday, the bird was captured at Tern Lake and the arrow removed from its breast and wing. While it could feed, it could not fly with its wing pinned to its breast by the blunt-tipped target arrow. These swans come to Tern Lake to feed and rest for their migration into and out of Alaska.

Here's hoping the perpetrator of this despicable assault has a mouth as big as his cojones, because we're looking for you, dude. A steady stream of vehicles pulls into the Tern Lake wayside, hoping for a glance of the injured swan, and sending good wishes its way. There's a reward out for information. A thousand bucks, dude. Just a little fragment of info leading to your identification is all that's needed.

In a case like this, though, it almost seems ugly for someone to accept a reward, so let's hope that reward is donated to the Bird Treatment and Learning Center, which has assisted many birds through illness and injury and returned them to the wild.

In the meantime, strut and brag all you want, Big Cojones. Someday, when the court pronounces its judgment upon you, and the scorn of Alaskans everywhere is heaped upon you, I think those big cojones of yours will shrink to the size of your brain--something in the BB range, I'm sure.

I checked on the swans this afternoon. The injured bird (I'm guessing here, but reasonably sure I'm correct) was resting in the grasses on one of the landy islands in the lake--as far away from people as it could get. Its mate was feeding nearby. Occasionally I saw the injured bird raise its head. 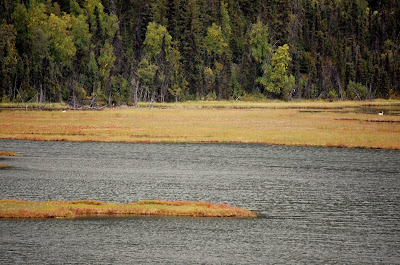 I think that's the injured swan on the left, resting and recuperating in the grass. Its mate is at the far right. A couple minutes before the mate had been at the other swan's side.

Now do you understand why I won't apologize for this rant?
Posted by Gullible at 5:34 PM