A Bagful of Swan 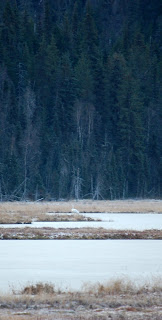 Things didn't look too promising this morning for the Tern Lake swan that can't fly. (See previous post.) Temperatures around 15 degrees had finished freezing the lake, and the swan was walking around on the ice, unable to feed or get into water, two things necessary for its survival.

Its mate had hung around until late in the day yesterday, flying up and down Tern Lake valley. Eventually, it left also.

Personnel from the Alaska Sea Life Center looked at the situation this morning and mobilized a rescue mission. Before that got going, however, a Moose Pass couple who live in Tern Lake valley donned protective clothing and went on a swan round-up. Today the ice was thick enough to hold their weight.

Roger and Joanie chased it around the ice for a time, and when it ran onto an island where Joanie waited, she dove onto it and hung on. 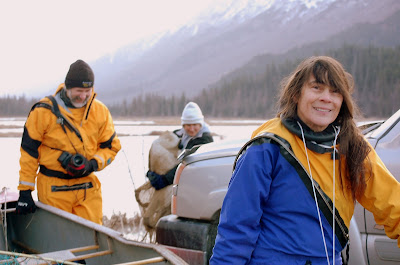 Joanie and Roger loading the unneeded canoe after capturing the swan. 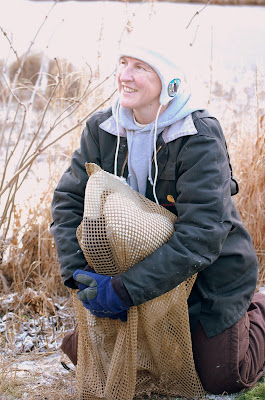 Heidi, a biologist from the Alaska Sea Life Center in Seward, with a bagful of swan. 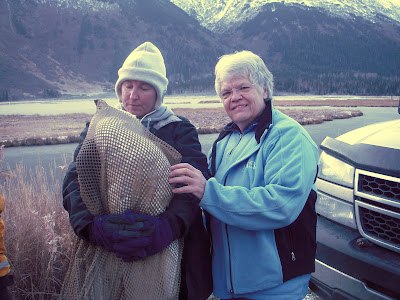 Gullible and Heidi with the swan. 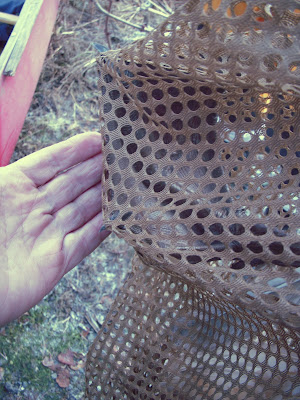 That, friends, is one huge bird foot. 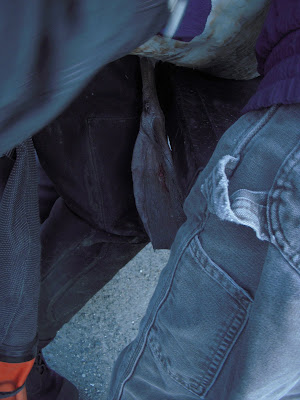 Here's the foot as the swan was being uncovered and put in a crate for transport. 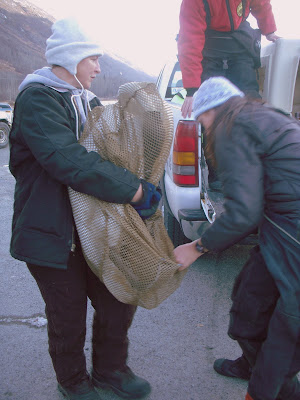 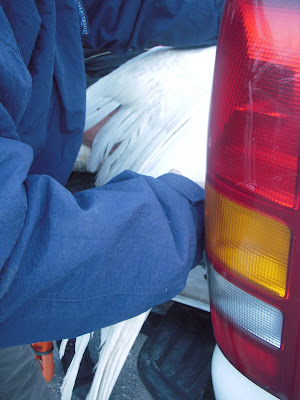 Crated. The swan has a mask made from a cut-off sock. This will keep it docile.Heidi assured me the swan will be okay riding in the back of an open pickup. Swans are easily over-heated, she said. 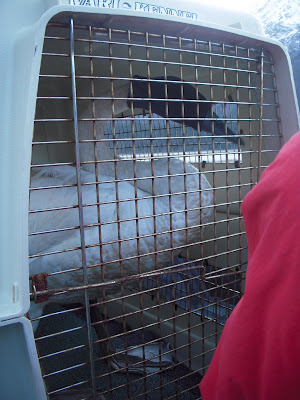 And off you go. To rehab, for sure. Maybe to a Washington center where it will be able to swim in a lake with other swans and fly off when it's able. Maybe to a captive breeding program. 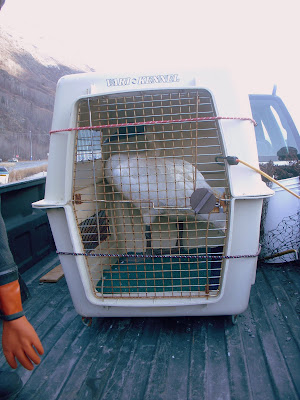 For now, the Tern Lake swan is safe. It will be examined more carefully at the Seward center by staff veterinarian Dr. Pam Tuomi and the staff biologists. Hopefully it will be feasting on kale and other greens soon.

The coyotes and bear that are hanging around the lake will have to look elsewhere for a meal.

Thanks to everyone who cared enough to rescue an injured swan.
Posted by Gullible at 2:44 PM