This story about the Kremlin is going to be in two parts because there are many photos to go with it. In this chapter, I will start off with a true or false quiz, and in the next chapter there will be an essay question at the end. So, pay attention, and turn off the cell phones. Lattes are allowed during these sessions.

Check all that are true.

The Moscow Kremlin is:

--a repository of tsarist treasures

--the seat of the Russian government

--the official residence of the Russian president

--where cannon barrels captured from Napoleon are displayed

--where all Russian tsars were crowned

--the spiritual center of

--the home of the world’s largest cannon and bell

--the cultural center of

--where clothing from tsars and tsarinas is displayed

--not the only Kremlin in

--where the tsars partied down after being crowned

Is that your final answer? Need to call a friend?

Did you answer “true” to all of the above? Congratulations! You have won a copy of my Frankfurt to boarding pass. Please send a self-addressed, stamped envelope and $9.95 for handling.

Yes, the Moscow Kremlin is all of the above and more. Like many new settlements in old , the Moscow Kremlin began with a wooden stockade for protection from invaders. “Kremlin” in means “fortress,” and drawings of the early Moscow Kremlin look much like the Army forts of the American West. Situated on a low hill that afforded an excellent defensive posture, archeologists have discovered artifacts dating to the third and second millennium B.C.

The earliest recorded mention of dates to the twelfth century. A wooden fortress was built in 1156, and eventually stone and brick replaced the wooden ramparts after a fire in 1356 destroyed them. This fortress was intended to protect the of from Lithuanians in the northwest, the “Golden Horde” (Tatars and Mongols) from the east, and fractious Russian principalities everywhere.


In 1485, Prince Ivan the Great ordered the red brick walls and towers to be built. They exist today as the famed red walls of the Kremlin. 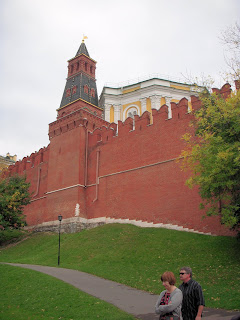 
Built in an irregular triangle, the 1.3 miles of wall encloses sixty-eight acres. The southern wall follows the , the western wall the , and the western wall faces . (By the way, the "Red" in Red Square is not because of the red star of the Soviets, but because the word for "red" in old Russian means "beautiful.") Wall heights range from six to sixty-two feet high, and eleven to twenty-one feet thick. 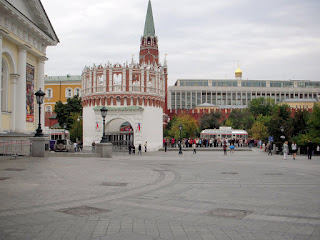 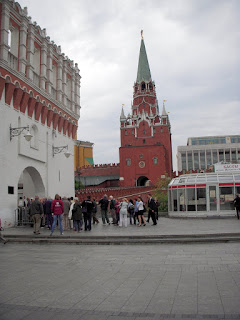 The Kutafiya Tower is on the left, the bridge over a former moat, and the red , the tallest of the pass-through towers at the Kremlin. Built in 1495-1499, has had several different adornments on the top of it, the latest being an illuminated ruby star. With the star, the tower is more than 227 ft. high, and its walls range in thickness between nineteen and twenty-two feet. 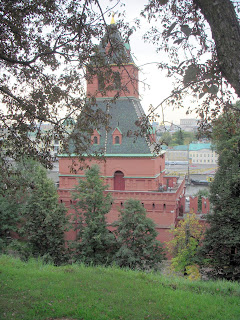 Some towers were pass-throughs, providing access into the Kremlin. Some were used as prisons, others as water supplies, still others provided secret tunnels, and of course more were “listening” towers to detect hostile tunneling. More information regarding these towers and their history can be found at http://en.wikipedia.org/wiki/Kremlin_towers. 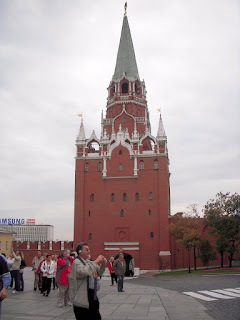 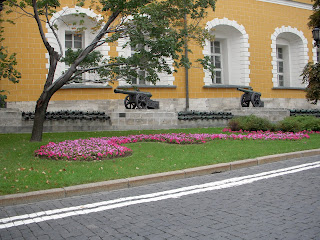 The Arsenal, now a military museum. Displayed in front are some of the 875 cannon barrels captured from Napoleon’s forces, some famous Russian cannons, and other foreign cannon barrels. 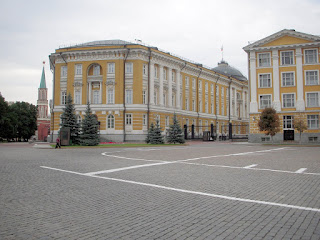 The Senate building on the left, and the former USSR Presidium on the right, which now houses the president’s administrative offices and other governmental offices. 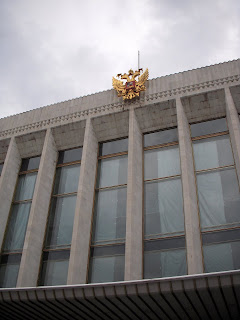 The Kremlin State Palace, above, is used primarily for concerts and ballets. There are 800 rooms in this building, one of them being a 6000-seat conference hall. It is the largest public building in . 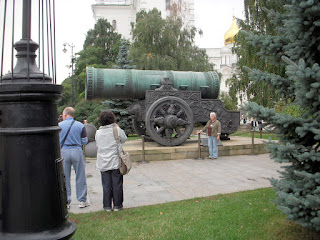 Some tourist standing next to the Czar Cannon, the largest cannon in the world.

Cast of high quality bronze in 1586, the 890mm caliber gun tube’s weight is 40 tons. It has never been fired, and the cannon balls, which don't fit anyway, are mock-ups. 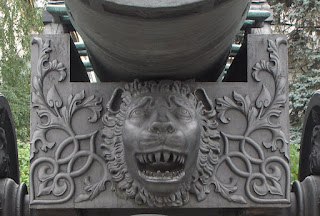 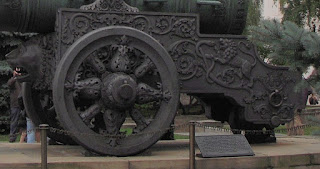 A short distance away is the largest bell in the world, the Czar Bell. Cast in 36 minutes in November of 1735, the bell weighs 200 tons. A fire caused the roof of a structure built over the casting hole to fall on the bell, and the ensuing cold water poured on the fire cracked the bell, causing a chunk weighing 11.5 tons to fall off. Eventually the bell was placed on a pedestal, where it remains today. It has never been rung. 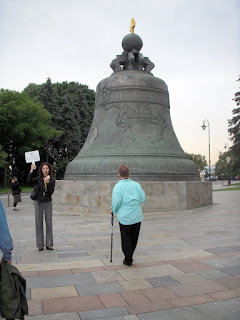 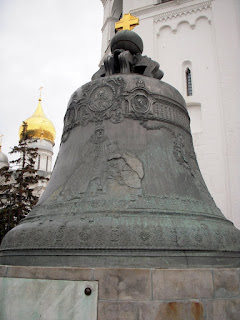 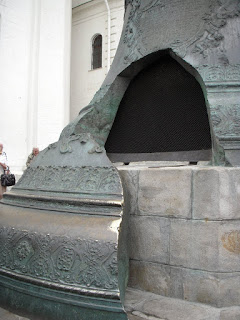 The eleven and a half ton "my bad."

Walking away from the bell and along a tree-lined path, I began to see the famous onion domes for which the Kremlin is known. 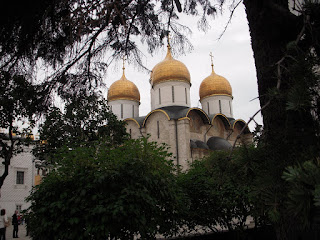 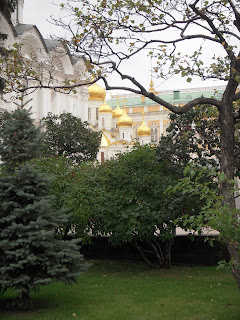 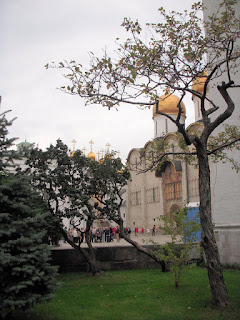 Oh, and of course these dudes were everywhere around the office buildings: 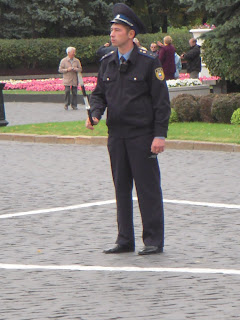 And now, because deserves a chapter all its own, we come to a pause in this presentation of the Moscow Kremlin.