I’m standing at the rail on the top deck of the MS Nikolay Chernyshevsky. The short rays of a setting sun bathe the Kizhi Pogost in golden light. 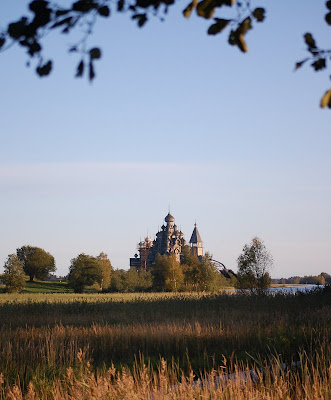 We are the last boat of the day. Already the souvenir sellers have shuttered their shops, folded their tents, and gone away. The dog with the too large head waits for its master to go to their skiff. Our vessel slips its thick, braided bonds, and side thrusters push us gently from the concrete pier. 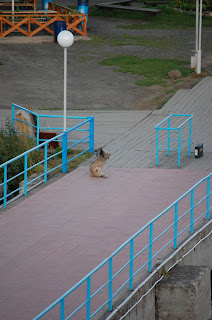 Silently, our boat slides past the ancient buildings on the grassy rise. The air is totally still. The two bands of gossamer wisps that begin to obscure the sun are forming rather than wind-borne, and the light transforms to silver. 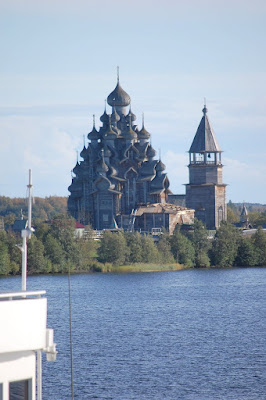 With no decipherable onset, there is sound in the air—the ethereal, breathy sound of a pan flute. A man seated nearby leans forward, his body language says he is anticipating disappointment. A flutter of two notes, a third held for long measure. Silence. Again, a flutter and a continuous third note, then silence again. It is a beckoning sound.
Then the pan flute plays the melody of El Pastor Solitario. The man leans back in his chair and says, “Perfect.” Tears obscure my vision, much like the now-obscured sun, and the world turns silver. 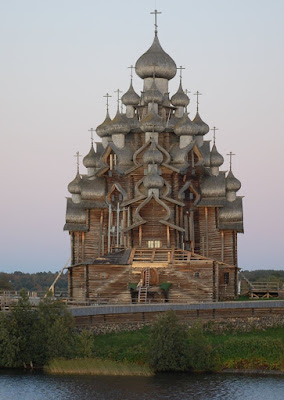 The scene is surreal. This stunning church of twenty-two domes, hand built by a master craftsman and his axe, now stands devoid of humans. The pan flute’s haunting music continues. Then, as our vessel slides behind another island, the music dissipates with no discernable ending. 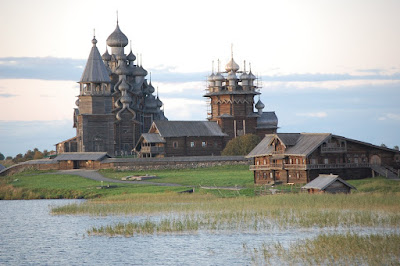 Once again the Kizhi Pogost is with time and nature as its sole companions.
(El Pastor Solitario: http://www.youtube.com/watch?v=6l5ZpCbQAOM)
Posted by Gullible at 11:09 PM