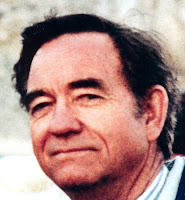 I dreamed last night of my late husband. He was at his rakish best, dressed in Carhartt coveralls, leaning against a Caterpillar tractor, one leg crossed in front of the other, his arms folded over his chest.

Under those light brown, well-worn coveralls was the body of a man who worked hard for a living, the muscles of his back, chest, arms, and hands well-developed and strong. On his face was a smile I had seen many times, the times before Alzheimer’s came and took him smile by smile, word by word, thought by thought.


There was humor and wit behind that smile, and something else, a something that made my heart and lungs pause for just an instant. There was a bit of the bad boy in that smile, that Marlon-Brando-come-to-town-on-a-motorcycle bad boy. That something said life with this guy wasn’t going to be a re-run of some genteel family sit-com. It wasn’t. It certainly wasn’t.

It was good to see him like that, good to see that smile again. His youngest daughter will say, when I tell her of this dream, that he came to tell us he’s okay now, two years after his death. I won’t dissuade her from that, because for all I know that’s exactly what happened. But, there’s more to his dreamtime appearance, because I had been having a nightmare, what I call a “stress dream.”

Once again—I have had an endless stream of dreams along this theme—I was cooking in the restaurant we used to own. This time it was breakfast and something was wrong with the eggs. I cracked one, and another egg was inside, and inside, and inside. Finally I reached an egg the size of a marble, and it was cooked. And purple. (I hope this isn’t related to the nesting dolls I brought home from as gifts for the girls across the highway from me.)

The dining room was full, the order wheel bristling with tickets, and something was wrong with the eggs. Finally, we had to announce we had no eggs, and the dining room emptied. Then the lunch crowd came in and filled the dining room. This time it wasn’t an egg problem. This time, no one would order off the menu.

They ordered things like “nemesia.” They ordered other things I’d never heard of, and none of them sounded like food. Another announcement and again the dining room emptied. (Ironically, or not, I am halfway through reading Julie and Julia, the story of one woman’s cooking and blogging her way through Julia Child’s Mastering the Art of French Cooking.)

I hoped it was all a dream and fled out the back door of the restaurant’s kitchen. That’s when I saw him—my husband in his Carhartt coveralls, leaning against his tractor. And that smile. I ran to him and grabbed him, my face close to his and that smile.

“Tell me,” I begged, “tell me this is all a dream.” And he did, those strong arms circling me and holding me close to him.

Perhaps the youngest daughter is right. He’s okay now, he has his smile back. As for me, I think there’s another message here, a message about me. After all those years of watching his essence disappear, of being a caregiver, and the one who had to make all the horrific decisions, I’m seeing him whole once again and looking to him for one of the things couples should derive from marriage. I’m looking to him for emotional support, for safe harbor from the storms, for surcease from the anxiety of jumbled dreams.

And to see that smile again. 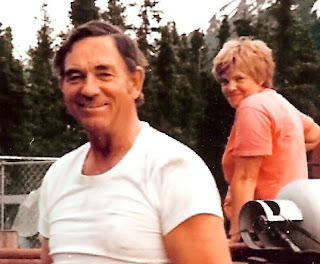