Up Close to the Great One

(I've posted the pictures here in small format. Click on them to get the full jaw-dropping experience. Fasten your seat belts, please.)

That wonderful Ken Burns’ series on PBS about the National Parks managed to spur me in the guilt node with a piton. I’ve been meaning to tell you about the day a blue dragonfly led me around by the nose, but things like and keep getting in the way. Now’s as good a time as any, because I’m worn out from looking at 1580 photos of , and trying to decide which ones to show you.

It all began around the first of August when I was fleeing the smoky city of after attending a wedding reception. As yellow clouds of smoke from nearby wildfires began descending on in earnest, Pablo and I hooked up the travel trailer and left for cleaner air to the south. 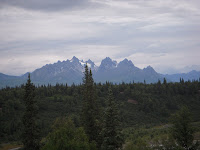 The cloud-hidden mountain lies behind these.

We got as far as a state pull-out, where on a clear day you could see , the king of all mountains on the North American continent, the sovereign of a National Park named after it, regardless of what the National Park Service calls it. , at 20,320 feet high, is so massive it makes its own weather, and there’s not a thing the NPS can do about it. 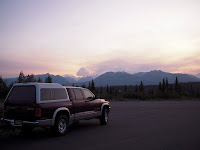 Sunset on Denali's surroundings, but the Great One remains hidden.

Alaskans have a way of doing things they way they want to, and such was the case with this mountain. Established in 1917 as , not even the summit of the mountain was within the original boundaries. In 1980 the Alaska Board of Geographic Names returned the name of the mountain to the Native Alaskan one of , meaning in Athabaskan “the Great One.” The National Board ignored the state board, and continues to call the mountain McKinley, after the former president who had never even been to Alaska.

Denali rises 18,000 feet from the lowlands at Wonder Lake, making its vertical relief even more than ’s, which rises 12,000 feet from the 17,000 foot Tibetan Plateau. The Park and Preserve encompass more than 6 million acres now. And, considering the wild antics of the North American and Pacific tectonic plates, Denali is growing about three feet a year.

The next morning, after a drumming downpour on my trailer’s roof, the Great One was peeking out from behind its guardian mountains. 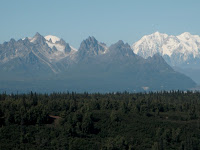 From this point and farther down the highway, I took numerous shots of the mountain, as seeing it clear and open, with not a cloud around, is a rare sight. 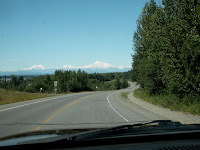 A little more than a hundred miles from , I rounded a corner, and the mountain stared at me in my rear view mirror. This was too much, so I turned right at the fifteen mile long that leads to Talkeetna, 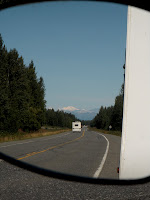 The town was packed with tourists. I drove around, herding tourists before me with my truck and camper, looking for a place to park. Finally, I pulled into the parking lot of the post office (Sunday and it was closed), and parked adjacent to a tall stand of trees where Pablo the parrot would be in the shade. 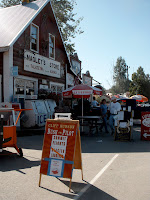 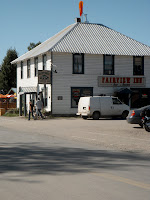 Nagley's General Store on the left. The white building on the right is the Fairview Inn, a tavern of some repute.

After getting him settled in the trailer, I stepped down and my eye was drawn to something blue on the ground. Thinking I might have dropped something, I bent down for a closer look.

A blue dragonfly, the very thing that has been appearing prior to my best adventures. Well, I took the advice I got by osmosis from the dragonfly.

Not too long afterwards, I found myself staring at this: 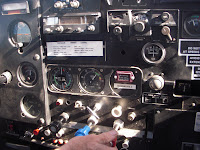 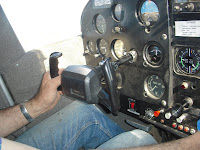 This is what I was in: 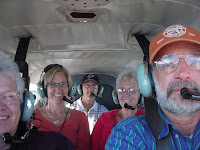 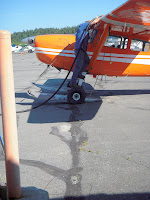 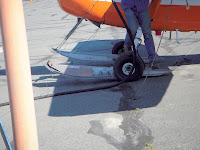 The plane's on wheel-skis, allowing it to land at a paved or gravel airstrip, or on snow and ice.

So, as we flew over the Petersville mining district heading for the left side of the mountain where stands, I will leave you to enjoy the journey with minimal narration and no commercial interruptions. I’ll let you know when we’re going to land. You are now free to gape. There’s no walking about the cabin in small airplanes, nor is there a restroom facility.

The dark stripe on this glacier is from a merging glacier, the dark being crushed rock. 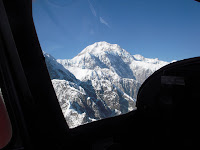 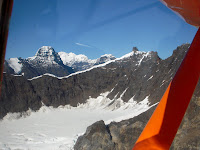 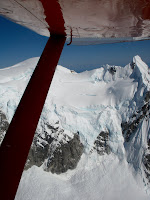 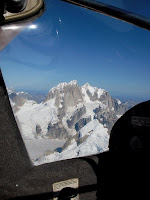 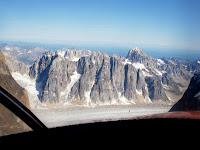 Clear sky and not even a breeze. A truly rare occasion. One last look from the plane: 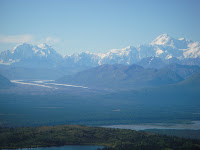 Foraker (17,400 ft., sixth highest mountain in North America) on the left, Denali on the right. After we landed, the clouds began to move in, and soon the mountain was once again shrouded in gray.

Okay, ladies and gentlemen, we ask that you make sure your seat belts are fastened securely, your cameras safely out of your eyes, and your tongues back in your mouths. Prepare for landing on that little scrap of asphalt you see ahead of you. 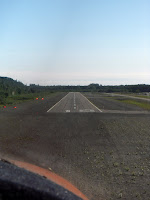 Remember what I told you about blue dragonflies. 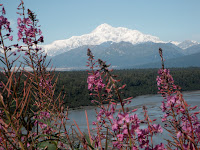