Oh, sorry. Let me repeat that in English.

We decided there was something in the translation. When the menu on our dining table aboard the MS Nikolay Cheryshevsky offered a luncheon soup with marrow and a dinner entree with marrow, we thought the cuisine was getting even more classy than it had been.

Funny how those things happen. Who knew that “marrow” would not be marrow from beef bones, but a summer squash? Of course, we had to dissect Tom’s vegetarian dinner that night to discover it. It reminded me of the home-hosted dinner and a couple matters of translation that I’ll tell you about.

Those home-hosted dinners are always frightening beforehand and thoroughly enjoyable during. Frightening because we’re meeting new people with a different culture, and, OMG, what are we going to talk about?!!! In , the language thing wasn’t a problem, but a small village in ?

And that’s where we were, the small . We’d already been given a lesson in pronouncing Uglich. “It’s OOO-glitch. Not UGH-litch. Please do not call their town Ugly.” It certainly wasn’t Ugh-litch. It was a charming little village of some 40,000 people, but more about that another time. First, the home-hosted dinner.

At 6:30 p.m., we were (as instructed) on the promenade above the boat pier where a Russian woman who acted like she was in charge assigned eleven of us to a deluxe small bus. Another woman, maybe forty-ish, with curly dark brown hair and wearing an apricot and white striped blouse, beige skirt below the knees, and beige shoes, got on the bus last through the side door. She sat down across a small aisle beside me, but said not a word.

Her silence continued as the bus wound through the narrow streets of the village. I silently practiced my limited Russian words and phrases. Just as I turned to her to prove how little Russian I knew, she spoke to the driver, obviously giving him instructions. Then, silence again. This was getting ominous.

The driver steered the small bus into a pot-holed dirt road between two apartment buildings—the infamous Khruschev “slums,” pre-fabricated, poor quality buildings of four or five stories. We pulled up at an end unit. Ominous lady or not, I was suddenly delighted. I had been hoping to see the inside of these apartments. 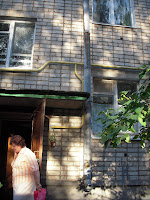 We climbed out of the bus and suddenly the silent lady became a cheerful, outgoing hostess. She showed us into her apartment, down a short hallway, past a tiny bedroom, and into a narrow living room where a table was set for us. Eleven of us seated ourselves around a table maybe 40 inches wide and less than six feet long. 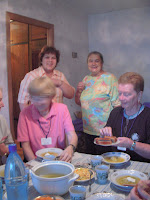 Natasha and Galina, our hostesses, behind Julia and Kathy

Then we looked around. A beautiful white embossed wallpaper brought lightness to the room, and lace curtains hung at the small window. A wooden hutch holding china and glassware was along one wall, and a sofa was pushed against the far wall. A small television set sat in one corner. Later, we put our heads together and figured the room was perhaps less than ten feet wide and less than 15 feet long. It was very cramped quarters for all of us, but scrupulously clean and homey. 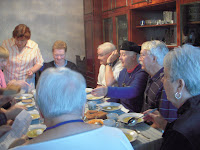 Natasha, our hostess, introduced herself and her mama, Galina. Natasha said she was a schoolteacher and had a five year old boy, but it appeared that two women were the only ones in the apartment that evening.

On the table were two small bowls of coleslaw, two bowls of a carrot slaw that was seasoned but no dressing could be discerned, and two small plates of sliced dark bread. 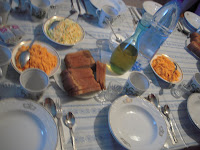 The menu, said Natasha, also included cabbage soup, potatoes, and something that sounded like “piroshki” or “perogi.” We were expecting a meat and potato filled pastry.

Galina brought out a tureen of cabbage soup. It was a delicious clear broth with shredded cabbage, carrots, sliced celery and diced potato. The dark bread went with it, as did the dollop of sour cream in the soup. Then came a huge bowl of boiled potatoes. They were so tasty we decided they had to have been boiled in perhaps a chicken broth. We ate these with the coleslaw and carrot salad, and more bread. We also had bottled water. 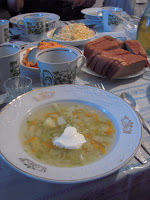 Several people remarked about the carrot salad, and an effort to get the recipe from Natasha ensued. We were not communicating in the right words, apparently. Finally, Kathy pointed to the salad and said, “Carrots and….?” 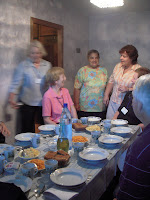 We were all a little surprised when Natasha next came out with dessert—a cake covered in fruit glace. We had been told previously that all the groups from the boat would have the same menu, and that it was a typical Russian meal. The lack of protein surprised us, but none of us left hungry. 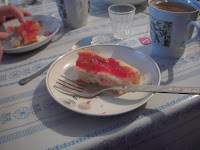 After dinner, while we were drinking tea, Natasha taught us two songs in Russian and then had us sing two songs in English. We chose America the Beautiful for one of them, and I don’t recall the other. I was deep in thought about this typical Russian meal. 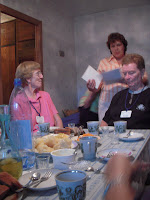 Natasha with the Russian songs in hand.

Natasha was an entertaining hostess, warm and outgoing. It also was apparent that she did this often. She had the routine down pat, and gave us the high sign when it was time to get back to the boat before it sailed. We had been in her home an hour. As is customary, according to the books I've read, they did not sit with us to dine, but served us, even though we asked them to join us. 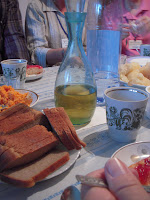 The carafe of Russian whiskey

There was one other thing on the table, though, that I want to tell you about. In a carafe in the center of the table was a golden Russian whiskey. Not vodka, but some sort of whiskey. Prior to beginning our meal, Natasha explained that we should pour some of the whiskey in a small shot glass, and that it was customary to make a toast and swallow the entire shot. It got your attention and warmed your tummy.

I had written a toast and had it translated into Russian. I stood, handed the translated writing to Natasha. She began to read it aloud, then stopped when she realized I was reciting it in English. 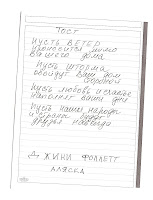 May the wind blow softly as it passes your home

May the roof of your house shelter you from the storm,

May love and happiness fill all of your days,

May our people and yours be friends always.

Those who were at the far end of the table next to Natasha told me later she had tears in her eyes as I spoke.


The sun was setting when we arrived back at the boat. People were strolling along the walkway that parallels the river, couples holding hands, folks walking dogs. Teenage girls smiled shyly at the boys that sauntered nonchalantly past them. 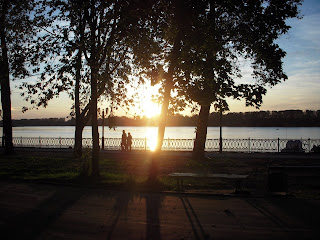 I stood on deck for a long time that evening, watching the sun set while I thought. I thought about the simple meal, so warmly and proudly served to us. 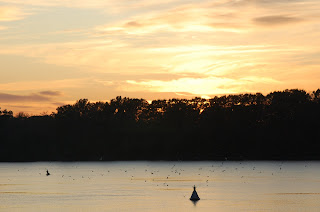 I thought about our expectations, how a simple translated word could lead to misunderstandings. 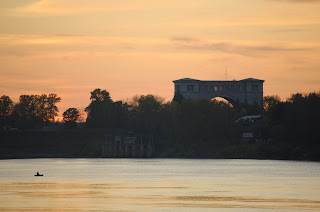 I thought about the lock tower I could see at the far side that closed off parts of this inland waterway from other parts and then opened those parts to allow passage, and how that could be a metaphor for our countries' relationships. 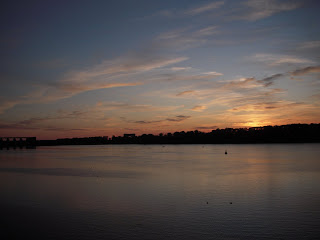 I thought about the Russian people I’d met so far, how they seemed just like us. 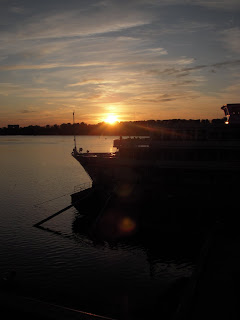 And, I thought about my toast, and how much I hoped something wasn’t lost in the translation.